As COVID-19 continues to take a toll on the American economy, legislators still have not yet come to a deal on what the relief and recovery measures are likely to look like, though one is expected fairly soon.

Businesses across the country shut down to attempt to curb the spread of the virus, and estimates are that unemployment claims could soar into the millions. Many colleges have cancelled graduations and have shifted to online instruction.

The White House and the Senate had reached a bipartisan deal early Wednesday morning on the $2 trillion bill that is supposed to help hospitals, workers and small businesses. (RELATED: Senate And White House Reach Bipartisan Deal On Nearly $2 Trillion Emergency Relief Package)

The Senate bill will “send $1,200 checks to many Americans, create a $367 billion loan program for small businesses, and establish a $500 billion lending fund for industries, cities and states,” according to the Washington Post.

Including various Federal Reserve measures, the total cost of the bill could exceed $6 trillion, according to Larry Kudlow, Director of the Economic Council.

Stoller adds that an, “additional $4 trillion from the Federal Reserve in lending power to be lent to big corporations and banks, authorization to bail out money market funds, multi-trillion dollar unregulated bank-like deposits for the super rich and authorization for the government through the Federal Deposit Insurance Corporation to guarantee trillions of dollars of risky bank debt.”

In addition to the large relief bill, the Trump administration has already offered some smaller relief packages for businesses, student loan borrowers and taxpayers.

Over 42 million student loan borrowers are now allowed to take a two month break from paying their loans. The Department of Education announced on March 20 that interest rates would be automatically reset to 0% for at least 60 days, according to CNBC.

All interest rates are automatically reset, but to delay paying loans for 60 days borrowers must request a “forbearance” from their online loan servicers.

“These are anxious times, particularly for students and families whose educations, careers, and lives have been disrupted,” said Secretary DeVos, per a DOE statement. “Right now, everyone should be focused on staying safe and healthy, not worrying about their student loan balance growing. I commend President Trump for his quick action on this issue, and I hope it provides meaningful help and peace of mind to those in need.” (RELATED: Mnuchin: Trump Administration Is ‘Looking At’ Suspending Student Debt Payments)

The DOE also encourages students to continue payments if they an, but maintains that the relief is a way to put money towards rent or groceries for people who are out of work amid the coronavirus pandemic.

On March 21, the Treasury Department and the Internal Revenue Service announced that the federal income tax filing date would be pushed to July 15, delaying it two months, according to an IRS press release.

“Taxpayers can also defer federal income tax payments due on April 15, 2020, to July 15, 2020, without penalties and interest, regardless of the amount owed. This deferment applies to all taxpayers, including individuals, trusts and estates, corporations and other non-corporate tax filers as well as those who pay self-employment tax,” the release states. 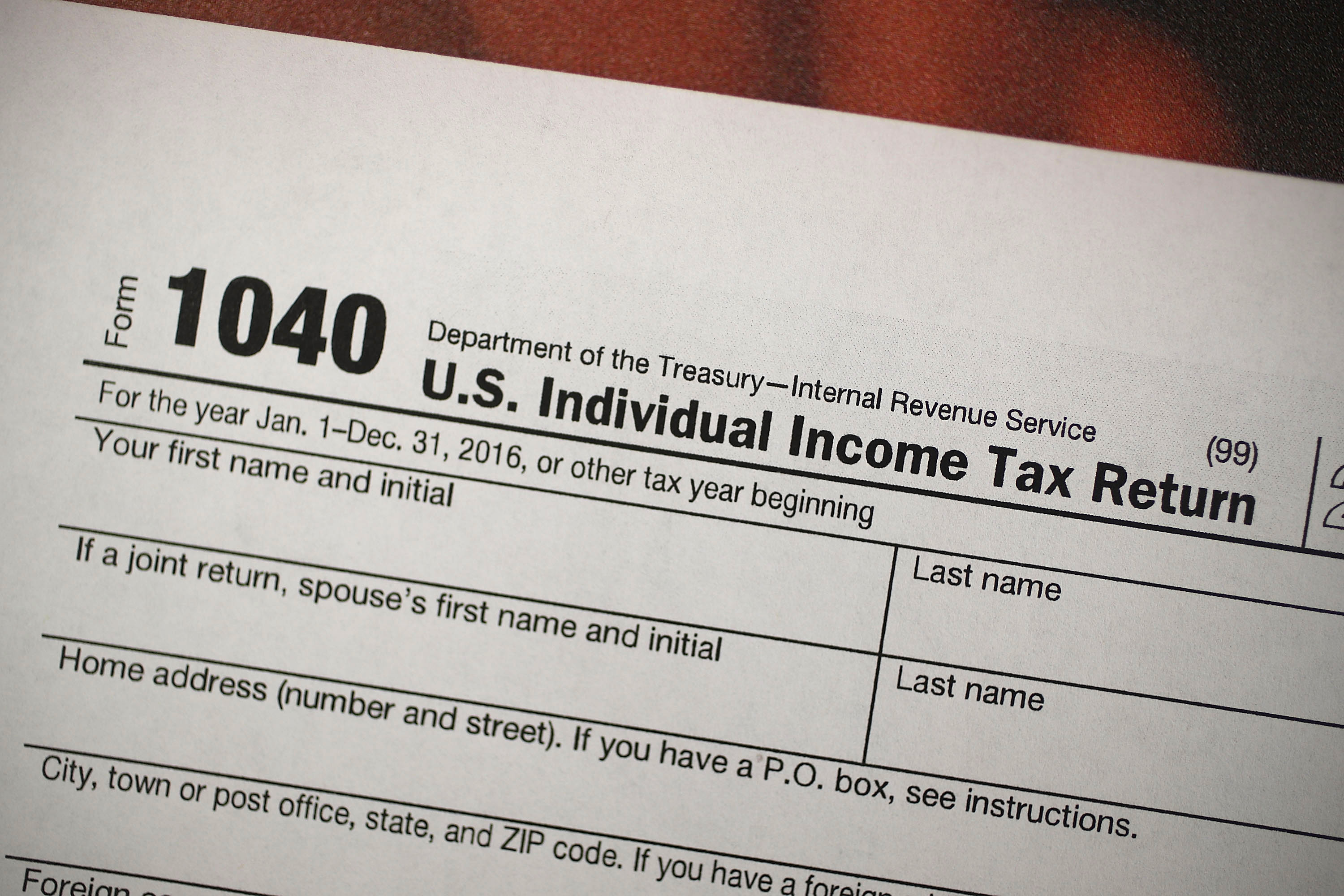 MIAMI, FL – DECEMBER 22: A copy of a IRS 1040 tax form is seen at an H&R Block office on the day President Donald Trump signed the Republican tax cut bill in Washington, DC on December 22, 2017 in Miami, Florida. (Photo by Joe Raedle/Getty Images)

There are no additional forms to fill out to qualify for this relief package, but taxpayers are still encouraged to file as soon as they can, as most returns are issued within 21 days. (RELATED: Ex-Treasury Department Official Pleads Guilty To Leaking Trump Associates’ Financial Documents To BuzzFeed)

“Even with the filing deadline extended, we urge taxpayers who are owed refunds to file as soon as possible and file electronically,” said IRS Commissioner Chuck Rettig.

“Filing electronically with direct deposit is the quickest way to get refunds. Although we are curtailing some operations during this period, the IRS is continuing with mission-critical operations to support the nation, and that includes accepting tax returns and sending refunds. As a federal agency vital to the overall operations of our country, we ask for your personal support, your understanding – and your patience. I’m incredibly proud of our employees as we navigate through numerous different challenges in this very rapidly changing environment.”

If you are owed a refund, filing your taxes is a way to get money in your bank account to put toward expenses.

“These new changes include issues ranging from postponing certain payments related to Installment Agreements and Offers in Compromise to collection and limiting certain enforcement actions. The IRS will be temporarily modifying the following activities as soon as possible; the projected start date will be April 1 and the effort will initially run through July 15. During this period, to the maximum extent possible, the IRS will avoid in-person contacts. However, the IRS will continue to take steps where necessary to protect all applicable statutes of limitations,” according to a Wednesday IRS press release.

Under this new law, passed last week and signed by President Donald Trump on March 18, small and midsize businesses can take advantage of two new refundable payroll tax credits, “designed to immediately and fully reimburse them, dollar-for-dollar, for the cost of providing Coronavirus-related leave to their employees,” according to an IRS press release. 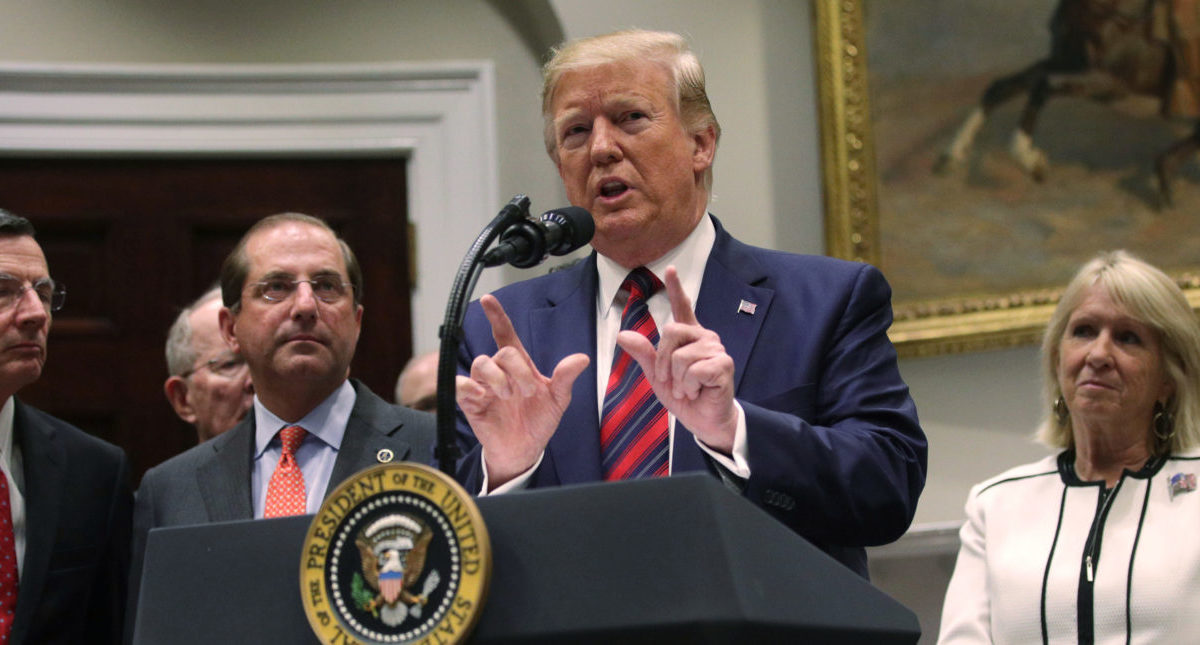 WASHINGTON, DC – MAY 09: U.S. President Donald Trump speaks as Secretary of Health and Human Services Alex Azar (2nd L), Sen. John Barrasso (R-WY) (L) and Sen. Bill Cassidy (R-LA) (R) listen during a Roosevelt Room event at the White House May 9, 2019 in Washington, DC. The Trump administration is requiring drug manufacturers to disclose the list price of any drug covered by Medicare or Medicaid with a cost of $35 or more per month. (Photo by Alex Wong/Getty Images)

All American businesses with under 500 employees will be provided funds to grant employees paid leave, either for personal health or to help care for family members. The legislation will keep their workers on their payroll. (RELATED: House Passes Coronavirus Bill That Provides Free Testing, Sick Leave Benefits)

Employees can receive up to 80 hours of paid sick leave from their employer, and the employer will be reimbursed.

Small businesses, with under 50 employees, “are eligible for an exemption from the requirements to provide leave to care for a child whose school is closed, or child care is unavailable in cases where the viability of the business is threatened.”

While several programs already in place will help put Americans at ease during this global pandemic, a response that is truly up to the challenge will require congressional action. The long-awaited Senate vote on the reported $2 trillion bill is expected to happen later today, while Speaker of the House Nancy Pelosi has delayed the vote in the House until tomorrow.

1
Trump Says White House Coronavirus Model Overestimated Number Of Hospital Beds Needed
US
2
Here Are All The Funding Landmines Congress Stuffed Into The 3rd Coronavirus Stimulus Bill
Politics
3
'We Don't Live In A Police State': Ted Cruz Blasts Democrats For 'Driving A Car Alone' Citation
US
4
MyPillow’s Mike Lindell Punches Back At Jim Acosta: Unfit To Print
Editorial
5
'Not Like It Used To Be': Trump Takes A Jab At The Associated Press
Media