If the marketplace is any indicator, American shooters are in the mood for precision bolt-action rifles with lots of included features. Threaded barrels, detachable magazines, modular stocks and oversize bolt handles have become the norm rather than the exception. The popularity of such rifles has soared, and nearly every manufacturer offers some variant of a “tactical” bolt gun. Among the recent arrivals to the party is Daniel Defense, a company well-known for producing quality semi-automatic rifles. Daniel Defense’s Delta 5 rifle encompasses many, if not all, of the features that these rifle buyers are seeking.

A well-shaped bolt knob, along with a three-lug bolt head, pivoting extractor and plunger ejector, make the Delta 5 a sure-handling bolt-action.
–

At the heart of the Delta 5 is a tubular, 17-4 PH stainless steel action with an integral recoil lug. Like many newer rifles on the market, the Delta 5 uses a three-lug bolt as opposed to the traditional two-lug arrangement. One can argue the merits of both systems, but there’s no arguing that many three-lug actions produce excellent accuracy, and they also result in a shorter bolt throw of 60 degrees.

The popular Remington 700 action has become the de facto pattern to which most others conform, and the Delta 5’s beefy action departs from that timeless design in many meaningful ways that are designed to address some of its shortcomings. For starters, the bolt itself is effectively double-sleeved, meaning that it reaches its full diameter at the forward and rear contact points with the action and locks up securely—a tighter fit means less disturbance when the firing pin engages the primer. The Delta 5 also uses a Savage-style floating bolt head, which aligns itself with the cartridge and the chamber. Finally, the extractor is a pivoting design, often called a “Sako-style,” the ejector is of the spring-loaded-plunger type and the bolt release is receiver-mounted.

Daniel Defense is one of few firms producing its own cold-hammer-forged barrels, and the stainless steel barrels found on the Delta 5 are made in house. One of the most critical factors in rifle accuracy is whether the chamber is properly aligned with the bore, which starts the bullet on a straight path into the rifling. Since the cold-hammer-forging process forms both the bore and the chamber around a mandrel at the same time, there are usually no alignment issues. The barrel on the Delta 5 is user-interchangeable via a threaded barrel nut. Our test rifle included barrels chambered in both 6.5 mm Creedmoor and .308 Win. Removing and replacing the barrel requires a vise, the included proprietary barrel wrench and a torque wrench. Torquing the barrel to 55 ft.-lbs. sets the correct headspace so gauges are not necessary.

The 6.5 mm Creedmoor Delta 5’s 24″ barrel is hammer-forged in house, and its muzzle features a recessed crown and 5/8×24 TPI threads to accommodate a variety of devices. A knurled thread protector is included.
–

The barrel on the Creedmoor-chambered Delta 5 is 24″, and, like the receiver, it is Cerakoted Cobalt Black and features a spiral surface pattern that is a byproduct of the hammer-forging process. The Heavy Palma contour is a happy medium between sporter-weight and target-weight rifle barrels. To accommodate suppressors or other muzzle devices, the barrel is threaded 5/8×24 TPI; we mounted a SilencerCo Omega 300 to our test rifle without issue. When a device is not in use, the threads are covered by a steel thread protector that matches the barrel contour.

The stock is a user-configurable design with several adjustment points. Length of pull is regulated by a series of removable spacers that are sandwiched between the stock and the recoil pad via two Torx bolts, and comb height can be quickly adjusted with the twist of a knob. Since scope dimensions vary so wildly these days, the adjustable comb is a key feature for precision shooting. The black synthetic stock also includes 12 integral M-Lok slots for mounting accessories (two on each side of the fore-end and seven at its bottom, one on the toe of the stock) as well as three female QD sling attachment points. A nearly vertical grip is ideally suited for prone, bipod or benchrest use.

The bedding system employed by the Delta 5 is an innovative design that melds elements of both a traditional stock and a more modern chassis. The action actually sits in a milled aluminum insert on top of the stock material, held together by twin Torx-style action screws. The aluminum bottom metal uses integral pillars that form the junction with the aluminum insert, and the recoil lug interfaces with the insert as well. The barrel is free-floated by the stock’s fore-end, but the somewhat-malleable synthetic material isn’t sufficiently rigid to prevent the barrel from making contact with the stock under all circumstances. That said, we saw no indication of this occurring during our range testing.

The rifle is fed via an AICS-pattern detachable box magazine, and one five-round Magpul PMAG is included. The trigger is a Timney Elite Hunter that is adjustable from 1 lb., 8 ozs., to 4 lbs.; our trigger broke cleanly at 3 lbs., 8 ozs., from the factory. A two-position safety rides along the right side of the tang, and the action can be cycled with the safety engaged. An ambidextrous magazine release consists of a pair of paddles that straddle the aluminum trigger guard; actuating the release should not require moving the strong hand from the grip for most shooters. An oversize bolt handle makes cycling the action from any shooting position a simple task.

The Delta 5 is not equipped with iron sights, but a Picatinny rail comes mounted on the rifle using four No. 10-32 cap screws. The rail itself provides 20 m.o.a. (5.9 mils) of elevation to help prevent scopes from running out of vertical adjustment at long range. We mounted a Leupold Mark 5 HD 5-25X 56 mm scope for our accuracy testing. We performed our traditional 100-yd. testing with the 6.5 mm Creedmoor barrel, and function-tested the rifle with the 20″ .308 Win. barrel in place.

The rifle proved to be extremely accurate with the Hornady 140-gr. ELD Match load, which always seems to impress. It was fired both with and without a suppressor attached, and, whether it was a function of harmonics or human error, it consistently shot better suppressed. The rifle fed, fired, extracted and ejected with 100 percent reliability throughout our testing. Working the bolt hard to the rear caused empty cases to eject with authority, while a lighter touch could lead them to merely extract. 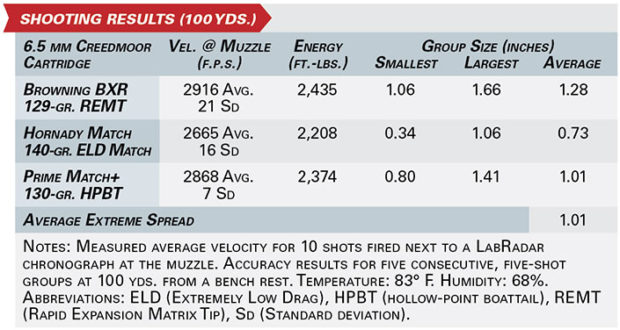 The Daniel Defense Delta 5 is a rifle that offers custom-style features and performance, direct from the factory. This rifle is capable of impressive accuracy, and proved to be both reliable and versatile during our testing process. For shooters who desire a bolt-action rifle with premium features—such as a detachable magazine, threaded barrel and adjustable stock—but without the premium price tag, the Delta 5 is a strong contender. For a company’s first foray into the bolt-action-rifle world, it is evident that the folks at Daniel Defense did their homework.