The year 2012 was potentially huge for every semi-auto shotgun maker except that one named Benelli. You see, that’s the year Paoli Benelli’s patent on its inertia-operated action design expired, and with it its stranglehold on the market—one that Benelli created almost single-handedly, thanks to its wonderful guns that would accept shells of any length and go bang every time in the harshest of environments.

At the time, Benelli’s unrivaled inertia-action shotguns were viewed as the gold standard for waterfowlers and military operators alike, a position that allowed Benelli to charge a premium for its guns. In essence, if you wanted the best, you bought a Benelli, and you’d pay top dollar for it.

That was then, but this is now, when competitors have appeared from nearly every corner of the globe looking to take some of Benelli’s market share with copycat-designed, less expensive guns. One great example is the Model MC312 from the Girsan arms company that is currently imported by European American Armory (EAA). I recently tested its new turkey gun “Gobbler” model, with a real-world price tag of only around $550—complete with an included red-dot optic.

Out of the box the MC312 Gobbler is much more impressive than what I was expecting for a Turkish-made, sub-$600 shotgun. It comes packaged with five choke tubes and a mini reflex-style red-dot sight. Beyond the accessories, the shotgun looks impressive with its optional vertical pistol grip and bronze Cerakote metal finish. Its polymer stock is camo-dipped, even though it’s more of a waterfowl pattern than a spring turkey finish. (To this I’d argue that not a turkey in the world can tell the difference.) It’s got sling studs that turkey hunters want. Most notably, however, is the 312’s longish receiver that’s highlighted by two slots on top that form an integral Picatinny rail mount. This design appears quite ingenious, as it does away with the need for drilled and tapped holes on the receiver to which a Picatinny rail could be mounted. Certainly, the design is easier and less costly for the end consumer to use because it does away with buying and mounting scope mounts; moreover, it lowers the optic by about half an inch compared to a rail mounted on top of the receiver, and the value of this cannot be overstressed when shooting one of the heaviest recoiling rounds in the sporting world—the mighty 3.5-inch turkey load. It allows the shooter to obtain a much better cheek weld on the stock that in turn mitigates felt recoil and makes finding the red dot quicker when that gobbler’s coming in fast.

In essence, the MC312 Gobbler is an inertia-action, semi-auto shotgun owning a 24-inch ribbed barrel, dual brass-bead rear/fiber-optic front sight and a five-round tubular magazine. Overall it measures 50 inches and weighs a hair over 7 pounds. As such, this Gobbler gun built for the spring woods is fast pointing, and, along with its oversized bolt handle, pistol grip, choke tube options and reliable action, would make it a great shotgun for slug-gun hunting and home protection as well. 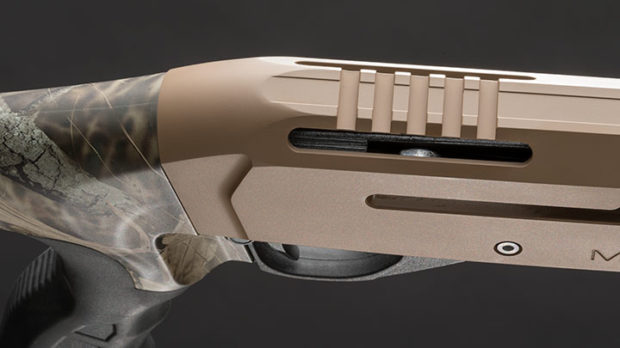 Its action is almost identical to Benelli’s vaunted second-generation Armi action that uses the gun’s recoil to compress a spring hidden within the bolt. As the gun recoils rearward around the bolt—thanks to the force of the fired shell—this spring compresses, then pushes forward thereby rotating the bolt head and unlocking it from the barrel extension. When this happens, the bolt flings backward violently, ejecting the empty shell from the chamber before being arrested by the bolt-return spring located in the buttstock. As it returns forward, it picks up another shell from the carrier and loads it into battery, completing the cycle.

The advantages of this system are threefold: First, it uses very few moving parts so it is quick and inherently reliable. Second, it is shell length-agnostic, so you can load 2¾-, 3- and 3½-inch shells in any order without adjustment. Third, because shell gases and powder grime are blown straight out of the barrel and not back into gas ports like in gas-action semi-automatics, the gun stays very clean, thereby increasing its reliability. Lastly, just like the Benelli, the MC312 features a magazine cutoff button located at the bottom of the receiver that holds the bolt open and allows the shell to be removed and replaced in the chamber without releasing a shell from the magazine tube. I’ve used this feature countless times, when perhaps a turkey that I’d anticipated coming in through the woods instead tiptoes across a field where a longer shot is expected.  I can substitute a No. 6 shell for a No. 4 quickly if needed.

As for the action’s downside? Because the inertia and recoil springs must be stout enough to withstand the tremendous forces of recoil from 3½-inch shells, sometimes the lightest field loads—like 1⅛-ounce skeet loads—fail to cycle the action. But this is a turkey gun, and those light loads likely won’t be used. Secondly, while the inertia action mitigates recoil much better than a break-open action, it is not quite on par with gas-action guns of similar weight.

Like the pre-Benelli Super Black Eagle 3 designs that some hunters criticized for being capable of not locking fully into battery if the bolt was eased and not slammed home—therefore causing a misfire—the Girsan action is also capable of this flaw. If Benelli gets criticized for it (it’s now corrected in its top-end models), then so should the MC312. Hunters should just always make sure the action is fully in battery before hunting.

In real-world testing, this Girsan proved an awesome shotgun, and I was pleasantly surprised at its quality, performance and finish all-around. Using magnum loads, it was supremely reliable; it pointed fast and printed its pattern where I aimed its sights. Its full choke tube delivered deadly patterns out to 50 yards, and its dual sight beads provided a precise aiming point for those who choose not to use the included quick-detachable red-dot sight. (I tested the sight and it worked as intended; the dot was adjustable for brightness; its controls moved the dot to zero and kept it there; and its battery is still burning bright after one month of testing. Even if you don’t prefer a red-dot sight on your turkey setup, it’s a great value-add to this shotgun.)

I found the MC312 to be well balanced, even with its rubbery, easy-to-handle pistol grip that I don’t personally prefer. (Sure, the grip is great for a dedicated turkey gun, but if I were to buy one, I’d buy the non-pistol grip model so I could use the gun for waterfowl hunting, too.) I love the Cerakote finish that not only dulls it from glare but protects its metal from the elements.

The only two negatives I discovered are that its safety is a bit stiff and quite loud; secondly, the gun’s “recoil pad,” isn’t much of a pad at all, but rather a piece of hard rubber that should be softer. But for such a great, cushy feeling in my wallet after I buy a $550 shotgun loaded with these features, I’m willing to take a little more pain in my shoulder. In sum, the EAA/Girsan MC312 Gobbler is an incredible turkey gun on its own, and an exceptional one for the money.