As frustrations over the indefinite coronavirus shutdown ramp up, some Americans are starting to raise questions about the models being used by the Trump administration and government officials to justify bringing the nation to a halt.

The Institute for Health Metrics and Evaluation (IHME) model being used by the White House coronavirus task force to coordinate its response to the pandemic has come under fire for its inaccurate and wildly changing forecasts. President Donald Trump admitted at one of his daily coronavirus press briefings Sunday that the IHME  model drastically overestimated the number of beds that would be needed to hold patients.

The model projected that New York, the epicenter of the crisis, would need 65,400 hospital beds by April 4, but only 15,905 were actually used, according to former New York Times reporter Alex Berenson. The mass hospital shortages that were predicted by the IHME model and others have largely been nonexistent. While defenders of the model argue that social distancing has kept many of their dire predictions from coming to fruition, the IHME model has taken into account strict social distancing measures for all of its projections. (RELATED: Why Trump’s Approval Ratings Are Currently High And How That Could Change)

U.S. President Donald Trump arrives to speak with reporters following a meeting of the coronavirus task force in the Brady Press Briefing Room at the White House on April 7, 2020 in Washington, DC. (Photo by Chip Somodevilla/Getty Images)

The IHME model has dramatically reduced its predicted death toll multiple times just in recent days. On April 1, the model predicted 93,500 deaths, but four days later it revised its projections to 81, 766. The model now predicts that the U.S. will suffer roughly 60,000 deaths from the virus. The model also projects that seven states, including New York, have already hit their peak, and predicts the nation as a whole will hit its peak over the weekend. This is a drastic change from just last week when the White House coronavirus task force predicted up to 240,000 deaths even if strict social distancing guidelines were implemented. (RELATED: Democratic Michigan State Rep. With Coronavirus Credits Trump For Saving Her Life)

Fox News host and Daily Caller co-founder Tucker Carlson has also been critical of the model and wondered Tuesday night if the revised models mean Americans can get back to work soon. Right now, 42 states are under “stay at home,” orders and the eight others have largely closed businesses across their states.

“If the virus is doing less systemic damage to our system than expected, then presumably we can begin to consider how to improve the lives of the countless Americans who’ve been grievously hurt by this, by our response to this,” Carlson said. “How do we get 17 million of our most vulnerable citizens back to work? That’s the task.”

Fox News senior political analyst Brit Hume bemoaned how these restrictions have “flattened the economy,” telling Carlson Tuesday night that policy makers need to do a better job of mitigating the human toll the pandemic has taken. (RELATED: EXCLUSIVE: How Trump’s Coronavirus Guidelines Could Tank The Economy)

Perhaps the biggest indictment of the model is not the criticism it has received from outside observers, but the doubts that its biggest proponents now seem to have.

“I’ve looked at all the models. I’ve spent a lot of time on the models. They don’t tell you anything. You can’t really rely upon models,” Dr. Anthony Fauci told the task force, according to The Washington Post.

The Post report also stated that leading researchers were “mystified” by the original projections of the model, and that it is unknown how the model arrived at those estimates. Despite reported internal doubts, the White House is continuing to use the IHME model to set its guidelines. The Trump administration’s current guidelines call for strict social distancing and prohibit gatherings of more than 10 people.

The guidelines were recently extended until April 30, meaning that America is effectively closed for business until at least the end of the month. But, if the model being used to implement these restrictions is as faulty as it seems, have the sacrifices Americans have been forced to make all been for not? Tens of millions of Americans have already lost their jobs over the crisis. Suicide and domestic violence rates have skyrocketed. Criminals across the country, including sex offenders, have been released from jail. Was all of this absolutely necessary to contain the virus? 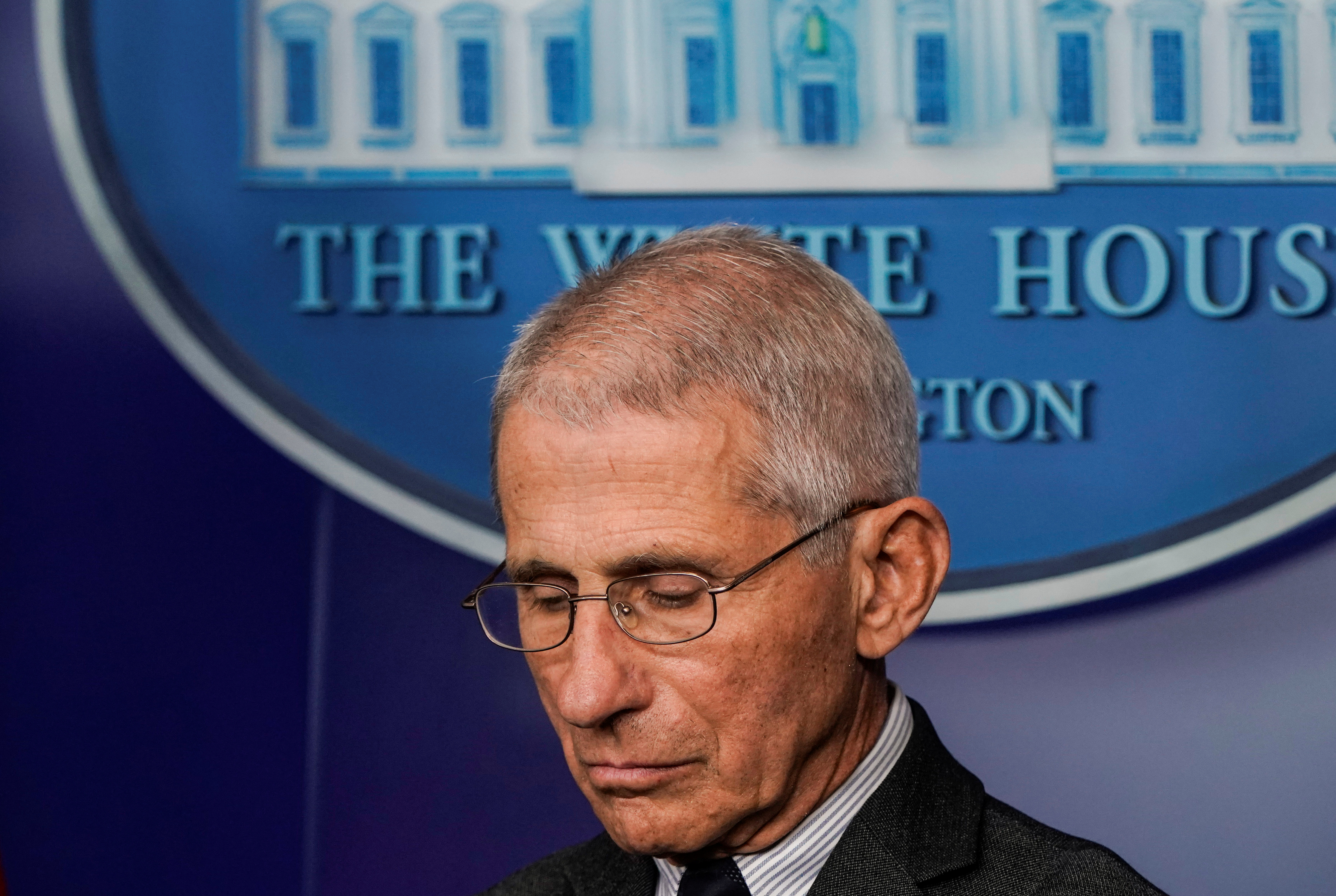 Director of the National Institute of Allergy and Infectious Diseases Anthony Fauci stands during a news briefing on the administration’s response to the coronavirus disease (COVID-19) outbreak at the White House in Washington, U.S., March 21, 2020. REUTERS/Joshua Roberts

Barnes is calling on the president to get a second opinion from medical experts outside the federal bureaucracy, bemoaning the “conformist culture” that exists in media and political circles, a culture that has been on display throughout the current crisis. (RELATED: Infectious Disease Expert Says Anti-Malaria Drug Marks ‘Beginning Of The End’ Of Pandemic)

“Bring in a different set of independent experts who have shown the capacity for independent thought and incorporate them into the task force,” Barnes said.

The records of people inside the task force, especially Fauci, have come under scrutiny as their projections continue to fall flat. While the beltway press has harangued Trump for downplaying the virus in its initial stages, Fauci’s past comments calling the virus “minuscule,” and his repeated statements that it would not prove to be a threat to the U.S. have largely been ignored. Fauci’s office declined an interview request from the Daily Caller.

“Guys like Fauci are accustomed to nobody questioning them ever, period, and that’s part of how we got to where we’re at now,” Barnes said.