Drive-in services consistent with the Centers for Disease Control and Prevention’s social distancing requirements may be held, according to an agreement between the Kentucky mayor and On Fire Christian Church’s legal representation, the nonprofit public interest law firm First Liberty Institute announced in a Tuesday press release.

“We are grateful to Mayor Fischer and Louisville city officials who worked with us to ensure their policies are both consistent with the Constitution and the CDC’s guidelines,” said senior counsel for First Liberty Institute Roger Byron in a statement. “During this challenging time, we need to see more of this kind of cooperation between government officials and the religious community.” (RELATED: ‘Stunning’ And ‘Unconstitutional’: Judge Grants Restraining Order After KY Mayor Vowed To Record License Plates Of Easter Church Goers) 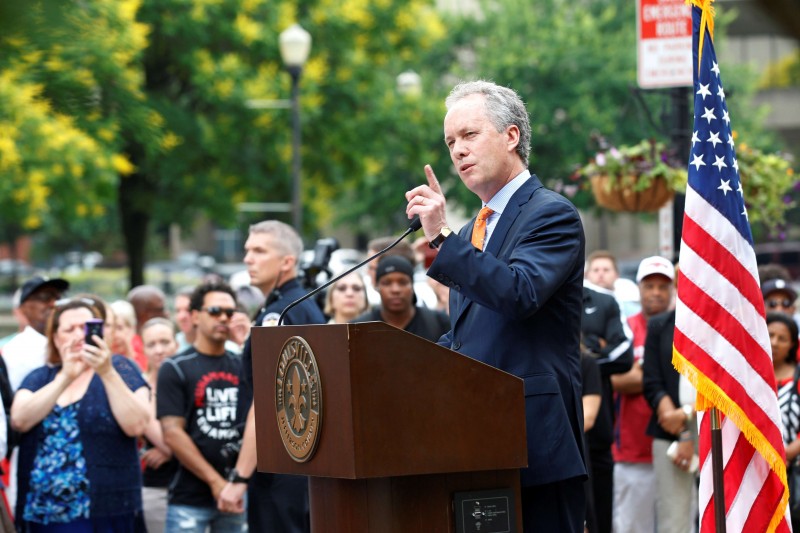 Louisville Mayor Greg Fischer orders all flags in Louisville to be lowered to half staff in honor of Muhammad Ali at City Hall in Louisville, Kentucky, U.S. on June 4, 2016. REUTERS/John Sommers II/File Photo

The judge condemned Fischer’s order in a memorandum opinion that compared the order to a report from the satirical publication, “The Onion.”

“That sentence is one that this Court never expected to see outside the pages of a dystopian novel, or perhaps the pages of The Onion,” Walker said. “But two days ago, citing the need for social distancing during the current pandemic, Louisville’s Mayor Greg Fischer ordered Christians not to attend Sunday services, even if they remained in their carsto worship — and even though it’s Easter.”

“The Mayor’s decision is stunning,” the opinion concludes. “And it is,’beyond all reason,’ unconstitutional.”

“I would like to thank Pastor Salvo and the members of the On Fire congregation for their recognition of the need for social distancing as we battle this deadly pandemic,” he said in a statement, according to WDRB. “And my thanks to the attorneys on both sides who worked out this settlement.”