“Both our students at Baylor and TCU have been surprised because they’d say that the majority of the student population is conservative-leaning or libertarian-leaning,” Sypher said. “That’s one of the motivations and reasons that they went to those schools. It’s where they can feel safe in their beliefs and expressing their viewpoints. And so the fact that their university’s telling them that they cannot express themselves freely on campus is what’s most alarming.”

Fogleman did not respond to further requests for comment as to why this would prevent a TPUSA chapter from forming. (RELATED: New York College Rescinds Censorship Of Conservative Groups After Congressman Intervenes, Students Say) 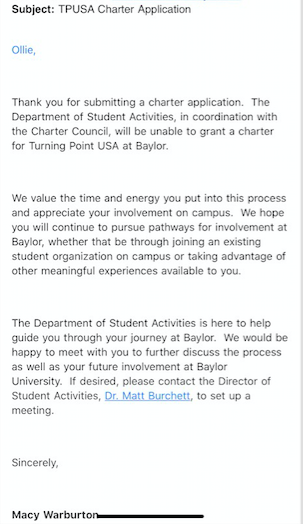 TCU has not responded to the DCNF’s requests for comment as to why the chapter was denied, but an April 13 letter from TCU Student Organizations Director Dede Williams Vann shows that the university denied TPUSA’s application because it “did not meet a broadly recognized need that is not currently being met by other similar organizations on campus.” 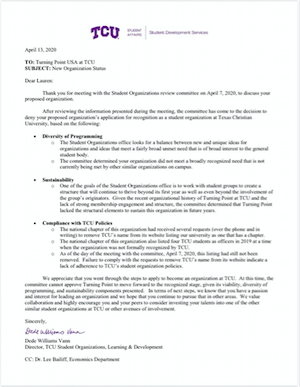 Students at TCU are excited to be a part of TPUSA and still want to bring the organization to campus, TCU chapter president Lauren McCoy told the DCNF.

She pointed out that TCU promotes the idea of a “diverse and inclusive student environment to ensure the students have an excellent, well-rounded education.”

“Yet, TCU has denied the TPUSA chapter that would promote those same ideals,” McCoy said. “TPUSA would only benefit the educational environment of TCU’s campus as students have a chance to listen to incredible speakers and connect with other students who believe in the principals of limited government, capitalism and freedom.”

“It has been very unsettling to not even have the satisfaction of knowing why we were denied,” Mintz said. “There has been no consistency whatsoever with Baylor Student Activities. They’re really showing their true colors with this decision — that they are against free speech and against conservative values being presented on campus.”

Despite the setback, Mintz said “everyone involved is very motivated and willing to fight for what we believe in,” and that he is confident they will have a chartered student organization at Baylor.

The universities are treating TPUSA as if it were “one and the same” as other conservative groups, Sypher said.

“We’re not,” he said. “Each and every organization, we all work together, but we all have different focuses on campus and when this many students are interested in starting a Turning Point chapter on campus, it shows that we’re not just another duplicate — that we also have something to serve that students want to be a part of.”