The political arm of the nation’s largest abortion provider issued a Thursday night statement in which the acting president of Planned Parenthood called on Biden to address Reade’s allegations: namely, that he kissed her, touched her and penetrated her with his fingers without her consent in 1993 when she worked for him as a senate staffer.

The press release made no mention of Reade’s name. (RELATED: Here’s Everything You Need To Know About Biden Accuser Tara Reade And Her Sexual Assault Allegation, All In One Place)

“Saying we believe survivors doesn’t mean only when it’s politically convenient,” Acting President of Planned Parenthood Alexis McGill Johnson said in the statement. “This isn’t a fringe issue, it’s one that affects all of us. This crosses political party, race, gender, income level, and sexual orientation.”

“Any person seeking elected office — and especially the highest office in the land — needs to address allegations of sexual assault and harassment seriously, both as a systemic problem and with a sense of personal responsibility,” she added. ” We all have much work to do to make our country a safer place, free of sexual violence.”

Planned Parenthood Thursday night statement came after MSNBC had already announced that Biden would address Reade’s allegations on the network Friday morning. Planned Parenthood had previously not weighed in on the matter and had not responded to many requests for comment from the Daily Caller News Foundation beginning April 13.

Following Biden’s appearance on MSNBC, Planned Parenthood Action again released a press release in which the organization praised Biden’s past record on domestic violence and urged him “to continue to push this conversation, and our country, forward. ”

Neither statement expressed support for Reade.

To Dr. Christine Blasey Ford: we believe you, and we thank you. #BelieveSurvivors pic.twitter.com/UxkP913QDA

On Monday, September 24, 2018, Planned Parenthood Action Fund organized a “National Walkout” in support of Ford and her allegations. “All you need to do is wear black and walk out — of your home, your office, your classroom, wherever you are — and post a picture to your social media with the hashtag #BelieveSurvivors,” the organization said in a press release.

The walkout was co-hosted by many other women’s groups, including the National Women’s Law Center, the Center for Reproductive Rights, NARAL Pro-Choice America, National Alliance to End Sexual Violence, and the Women’s March. About 46,000 people responding “going” on Facebook. 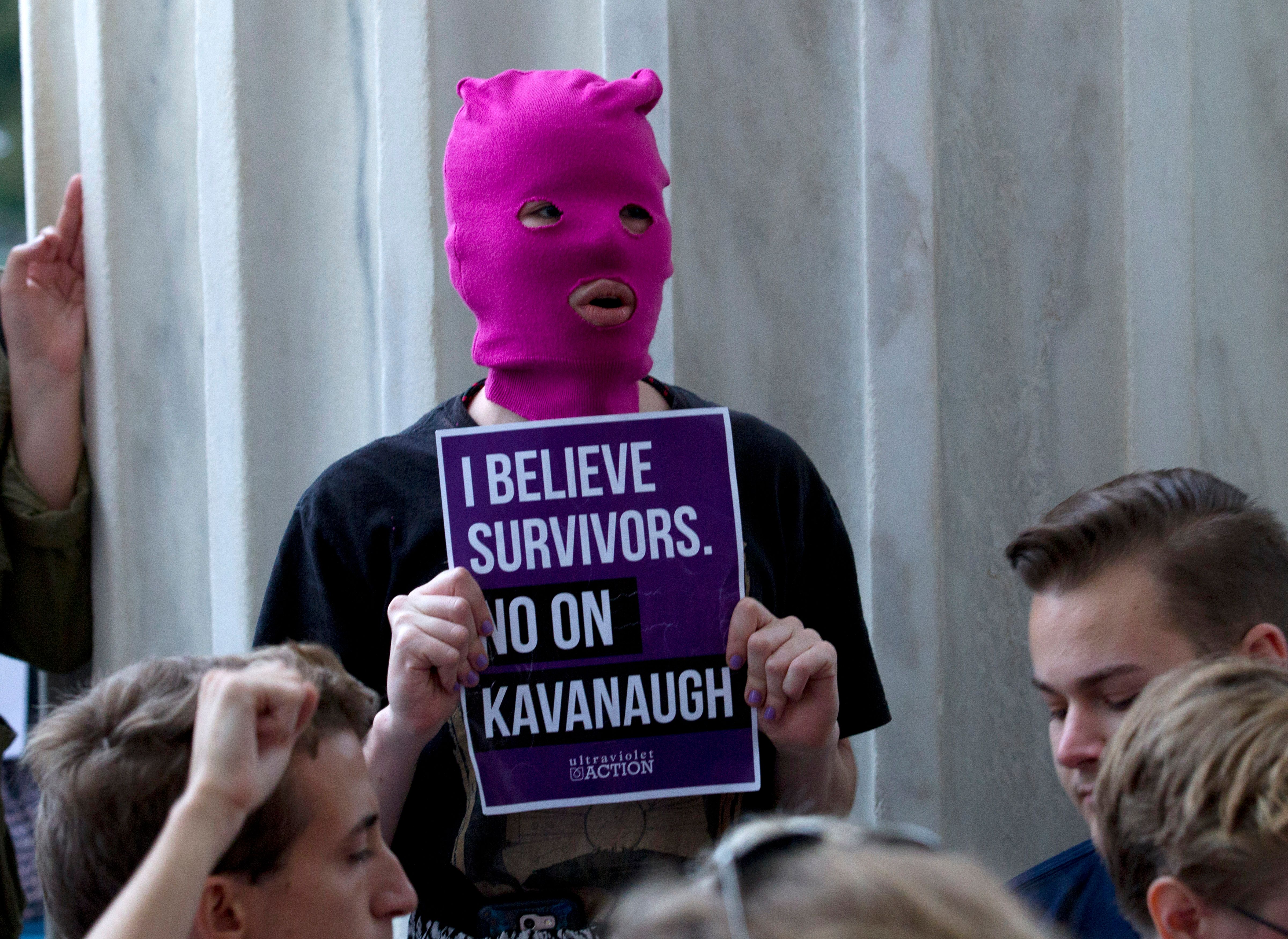 Demonstrators take the steps of the Supreme Court to protest against nominee Brett Kavanaugh. (JOSE LUIS MAGANA/AFP via Getty Images)

“Thank you, Dr. Christine Blasey Ford. You should not have to relive your trauma, but we are grateful for your willingness and courage to share your story. We believe you, and we believe all survivors,” Dawn Laguens, executive vice president of Planned Parenthood Federation of America, said in a September 27 statement.

The statement noted that “the unfortunate truth” is that too many of those who come forward with sexual assault stories “suffer further hurt and humiliation by having their story dismissed, their integrity doubted, or their motives questioned.”

“We Believe Dr. Christine Ford,” Planned Parenthood Action Fund said in a September 21 statement. The statement sympathized with the struggles of women who have experience sexual assault and elaborated at length on why Kavanaugh is unfit to serve as a Supreme Court justice, citing both Ford’s allegations and Kavanaugh’s opposition to abortion.

The organization also created a video slamming Kavanaugh for being accused of sexual assault by Ford.

“Sexual assault is a crime and an abuse of power,” the video says as dramatic music plays in the background. “Judges are not immune, Brett Kavanaugh is not entitled to a seat on the Supreme Court.”

Over a year later, the organization again highlighted Ford’s testimony and praised her for standing up against Kavanaugh.

We believe Deborah Ramirez, Dr. Christine Blasey Ford, and all survivors of sexual assault. Millions of women and countless survivors were watching a year ago, and we are still watching today. #BelieveSurvivors, always. pic.twitter.com/ah9iFQizMw

Planned Parenthood did not respond to multiple requests for comment from the DCNF regarding their messaging over Reade’s and Ford’s allegations, or why the organization waited to weigh in on the matter until it had already been announced that Biden would address Reade’s allegations.

1
Ilhan Omar Calls For The 'Dismantling' Of US Economy, Political System
Politics
2
Ben Shapiro Steps Down As The Daily Wire's Editor-In-Chief
Media
3
Two Californians Charged With Hate Crime For Painting Over Black Lives Matter Mural
US
4
This Name Is A Strong Contender To Replace The Washington Redskins. Will Fans Like It?
Editorial
5
'Well That Was Quite The Mic Drop': Harris Faulkner Reacts After Kayleigh McEnany Scolds Reporters
Media