Giorgi Rtskhiladze’s text message to former Trump lawyer Michael Cohen days before the 2016 election has been an expensive one.

The Georgian-American businessman says he has spent more than $100,000 on legal fees, on top of the damage to his reputation and businesses, as a result of the Oct. 30, 2016 text message to Cohen.

The message is quoted in the special counsel’s report, and was interpreted by President Trump’s critics as a possible reference to the Steele dossier’s most salacious allegation: that the Kremlin has video tapes of Trump with prostitutes in Moscow.

“Stopped flow of some tapes from Russia but not sure if there’s anything else. Just so u know,” Rtskhiladze wrote in the text message cited in the special counsel’s report.

While liberal commentators like MSNBC host Rachel Maddow seized on the text message, Rtskhiladze says that he had no direct knowledge of Trump-related tapes and that his full exchange with Cohen shows it.

“It would be laughable if it wasn’t devastating for me and my family,” Rtskhiladze told The Daily Caller News Foundation in a phone interview.

“Although I had nothing to do with the Steele dossier, the Mueller team connected my isolated text message about some gossip I heard from a friend in Moscow about some tapes I’ve never seen or believed ever existed and built the case against me, tainting my name forever.”

Rtskhiladze is now waging a reputation rehabilitation campaign. He’s out with a memoir, “Kompromat,” detailing his life as an immigrant from Georgia, his partnership with the Trump Organization, and his interactions with the special counsel over his text message. (RELATED: Georgian Businessman Releases Texts With Cohen That Were Left Out Of Mueller Report)

He’s also calling on Attorney General William Barr to formally apologize over the descriptions of him in Special Counsel Robert Mueller’s report of the Russia probe.

“I demand an official apology and correction to the Mueller Report. I deserve nothing less,” he wrote to Barr in a letter on April 21 shared with the DCNF.

The report refers to Rtskhiladze as a Russian businessman, which he considers a slight to his Georgian heritage. Rtskhiladze also asserts that the full exchange he had with Cohen shows that he did not have any direct knowledge of Trump tapes.

After Rtskhiladze mentioned tapes to Cohen, the Trump lawyer replied: “Tapes of what?”

“Not sure of the content but person in Moscow was bragging [that he] had tapes from Russia trip,” Rtskhiladze said. “Will try to dial you tomorrow but wanted to be aware. I’m sure it’s not a big deal but there are lots of stupid people.”

“You have no idea,” Cohen wrote.

Rtskhiladze was prompted to send the letter to Barr after the Senate Intelligence Committee reached out to his attorneys in late February with follow up questions regarding his interactions with the person who told him the sex tape rumor.

Rtskhiladze’s lawyers disclosed the identity of the source in a letter to the Senate panel on Sept. 16, 2019.

The letter, which has not previously been reported, said that Rtskhiladze’s friend and former business partner, Sergey Khokhlov, contacted him in October 2016 after he overheard someone at a restaurant in Moscow discussing a Trump tape.

Rtskhiladze’s lawyers said that Khokhlov, who was affiliated with a company called The Leader Group, was not part of the group discussing the alleged tapes.

“Mr. Rtskhiladze does not have any information about the location of this dinner or the individuals at the table next to Mr. Khokhlov,” Rtskhiladze’s lawyers added.

Rtskhiladze says he met Khokhlov in 2004 and has maintained sporadic contact with his over the years. They last met in person in 2009, Rtskhiladze’s lawyers told the Senate, but they speak by phone or text message every six months or so.

Rtskhiladze partnered with the Trump Organization in 2011 on a licensing deal for a Trump Tower in Georgia. He worked with Cohen in 2015 on a deal to build a Trump Tower in Moscow, but that project did not materialize. 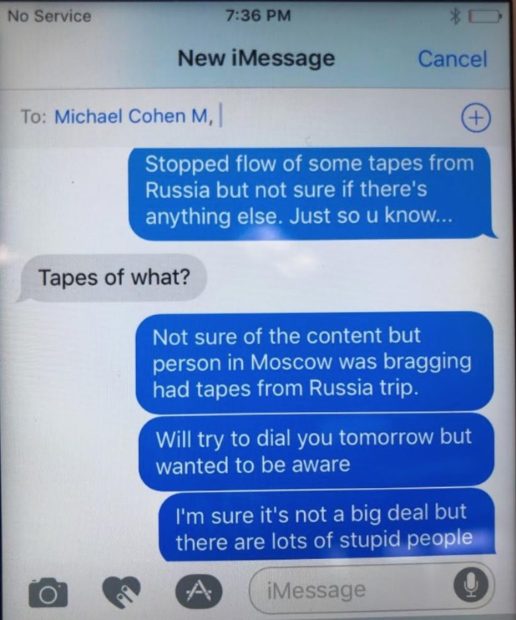 Rtskhiladze writes in “Kompromat,” his memoir, that he contacted Cohen about the rumored tapes because he was concerned about his business deals with Trump Organization. Weeks earlier, a tape of Trump from a 2005 “Access Hollywood” interview had been released in which the real estate mogul was recorded bragging about accosting women.

Rtskhiladze says that he contacted Cohen after hearing the rumor of a Russian tape, in part because of his own business dealings with the Trump Organization.

“In this case, I didn’t believe for a second that the bragging should be taken seriously, or even that there were any tapes — because honestly, it was hard for me to imagine Trump putting himself in such a position in a foreign land,” Rtskhiladze writes in his book.

“But given that the Access Hollywood tapes had just been released, the rumor of such a tape concerned me. Even an unproven rumor can be a dangerous thing.”

The DCNF was unable to contact Khokhlov. It is unclear if the Senate Intelligence Committee has contacted him. A spokesperson for Republican North Carolina Sen. Richard Burr, the chairman of the committee, did not respond to a request for comment.

The Steele dossier has come under intense scrutiny since the release of the special counsel’s report. In the first memo of the dossier, dated June 20, 2016, Christopher Steele wrote that a “former senior Russian intelligence official” said the Kremlin had blackmail material on Trump in the form of a tape of him in a Moscow hotel room with prostitutes.

No evidence of the tape has surfaced in the three years since the dossier was published. Trump has vehemently denied the allegation, and former Trump associates who were with him during his trip to Moscow have said that he was alone for only a few hours during his trip to Russia, which centered around the 2013 Miss Universe pageant.

A Justice Department inspector general’s report released on Dec. 9 said that Steele’s primary source of information disputed how the sex tape rumor is described in the dossier. The source said that he was not able to confirm that the Kremlin videotaped Trump, and that Trump’s tryst with prostitutes was “rumor and speculation.”

Footnotes from the IG report declassified last month said that the FBI received evidence in February 2017 that the allegation may have been fed to Steele as part of a Russian disinformation campaign.

Lawyers for Senate Intelligence reached out to Rtskhiladze’s attorneys on Feb. 21 inquiring about a text message that Rtskhiladze sent to Cohen on Jan. 2, 2017.

Cohen had asked Rtskhiladze to help his secure an invitation for his daughter to the birthday party at St. Barts for Roman Abramovitch, the Russian billionaire.

Rtskhiladze said that he tried to help Cohen by contacting Khokhlov.

The Senate sought clarification about whether Rtskhiladze was physically with Khokhlov, since he had previously said he had not met with his friend since 2009.

“He meant that Mr. Khokhlov was with him in helping to get Mr. Cohen access to a party in St. Barts, not ‘with him’ in the physical sense,” the lawyers said.

Rtskhiladze expressed frustration at the Senate’s renewed interest in him.

“The Senate seems to be going exactly same direction where Mueller went to, and they hit the wall with me for hours and hours of crazy investigation, interrogation, and grand jury,” he told the DCNF.

“This is done first to resuscitate the debunked Steele dossier, and to create a perception of collusion between the Trump team and Russia.”