A black man carrying a sign for a black history tour sharply criticized protesters who had threatened to tear down a statue of Abraham Lincoln freeing a slave in Washington, D.C. Friday night.

The Emancipation Memorial has been the subject of the ire of protesters – who argue the statue is demeaning and patriarchal – for the past week. Abolitionist and former slave Frederick Douglass spoke at the dedication of the memorial, which was funded by former slaves, in 1876, according to Washington D.C.’s tourism website.

“Y’all don’t even know the history of this statue, but you want to tear it down!” the man said into a megaphone. The man was wearing a tour guide uniform and carrying a sign with a website for a black history tour that includes the statue.

This man just walked in with his own megaphone:
“Y’all don’t even know the history of this statue, but you want to tear it down!” pic.twitter.com/RJv1VpwXrh

Later, a protester in favor of tearing the statue down spoke in response to the man.

“Are you guys done hearing from people who do not want change?” he said. (RELATED: Wisconsin Protesters Tear Down Statue Of Civil War Hero Who Fought To End Slavery)

He added: “We are going to TEAR THAT MOTHERFUCKER DOWN!”

Now the guy running the event is back on with his megaphone:
“Are you guys done hearing from people who do not want change?”
(Yeah!)
“Then what are we gonna do?”
(Tear it down!)
“We are gonna TEAR THAT MOTHERFUCKER DOWN!” pic.twitter.com/zmGy3eZKho

Protesters stormed the memorial Tuesday night and originally planned to topple it Thursday saying they would bring equipment. However, the National Park Service erected a fence Thursday around the memorial to block protesters from attacking it, The Wall Street Journal reported.

Meanwhile, Mayor Muriel Bowser said that there should be a peaceful debate over the fate of the statue, according to The Washington Post. Bowser said the city should “not have a mob decide they want to pull it down.” 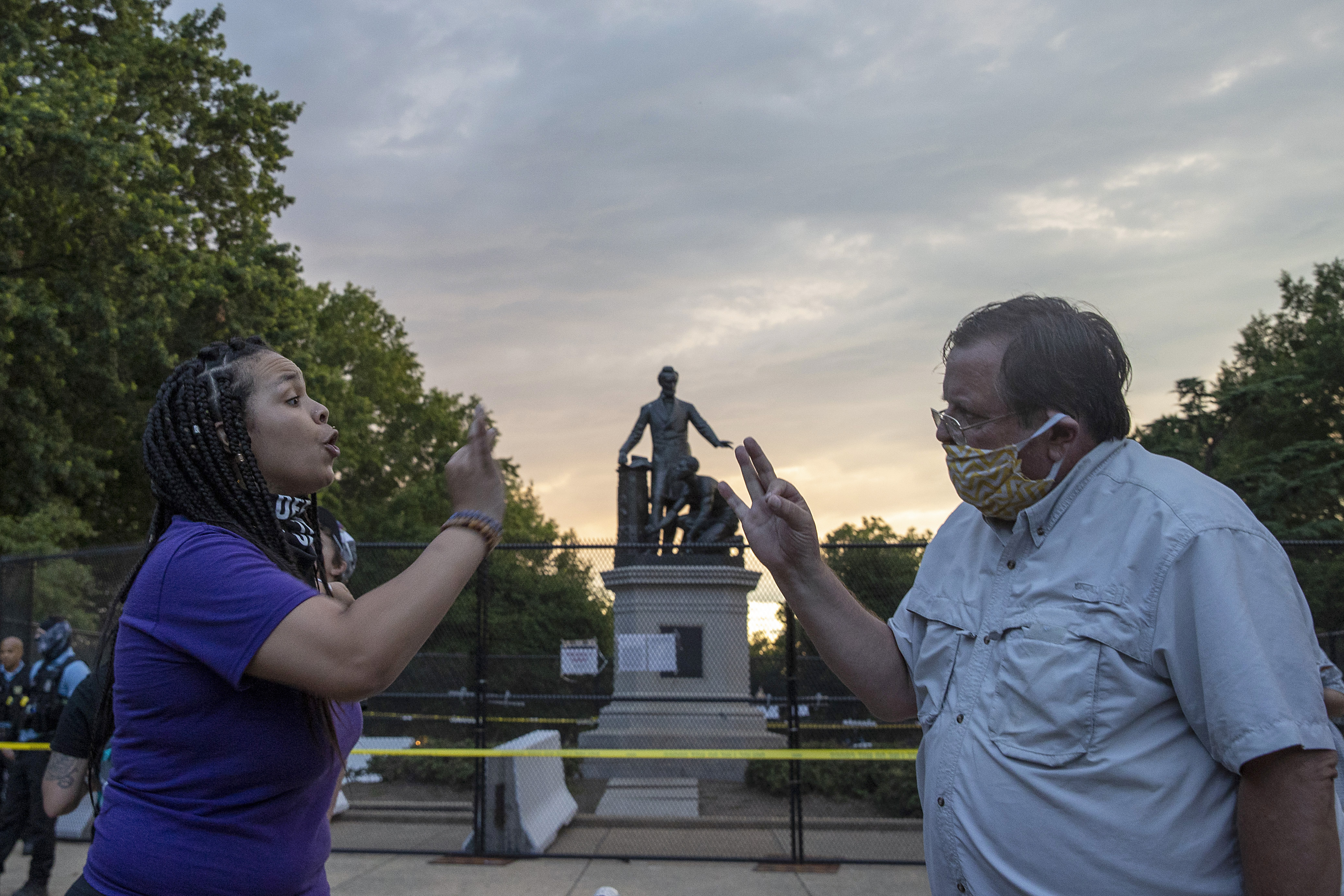 Statues and monuments have been under attack across the country in the aftermath of the death of George Floyd. Floyd died May 25 after a former Minneapolis police officer knelt on his neck for about nine minutes, video of the arrest showed.

“It’s a healthy expression of people saying let’s get some priorities here and let’s remember the sin and mistake that this nation made and let’s not celebrate it,” Democratic Gov. Andrew Cuomo said Tuesday.

Cuomo also reiterated his support for the removal of the Theodore Roosevelt statue outside the American Museum of Natural History in New York City.

Rioters attempted to tear down the monument of former President Andrew Jackson in Lafayette Park outside the White House on Monday night.