As official U.S. military travel is reportedly set to resume June 30, lagging airline policies could force military personnel to leave their pets behind.

The Department of Defense (DOD) issued an immediate travel ban April 2 for all personnel within and without the continental U.S., whether active duty military or DOD employee. This order was extended through June 30, at which point sources tell the Daily Caller the DOD and other government entities will be lifting their bans.

Military orders are resuming in anticipation of the June 30 travel ban expiration, but sources from within the DOD told the Daily Caller that their requests to transport their pets are being denied by the airlines.

When airlines tightened their belts by means including furloughs, flight cancelations and reduction of pet transport services, Reuters reported in May that many pets were left stranded. So far, there is no clear indication of when pet transport will resume. 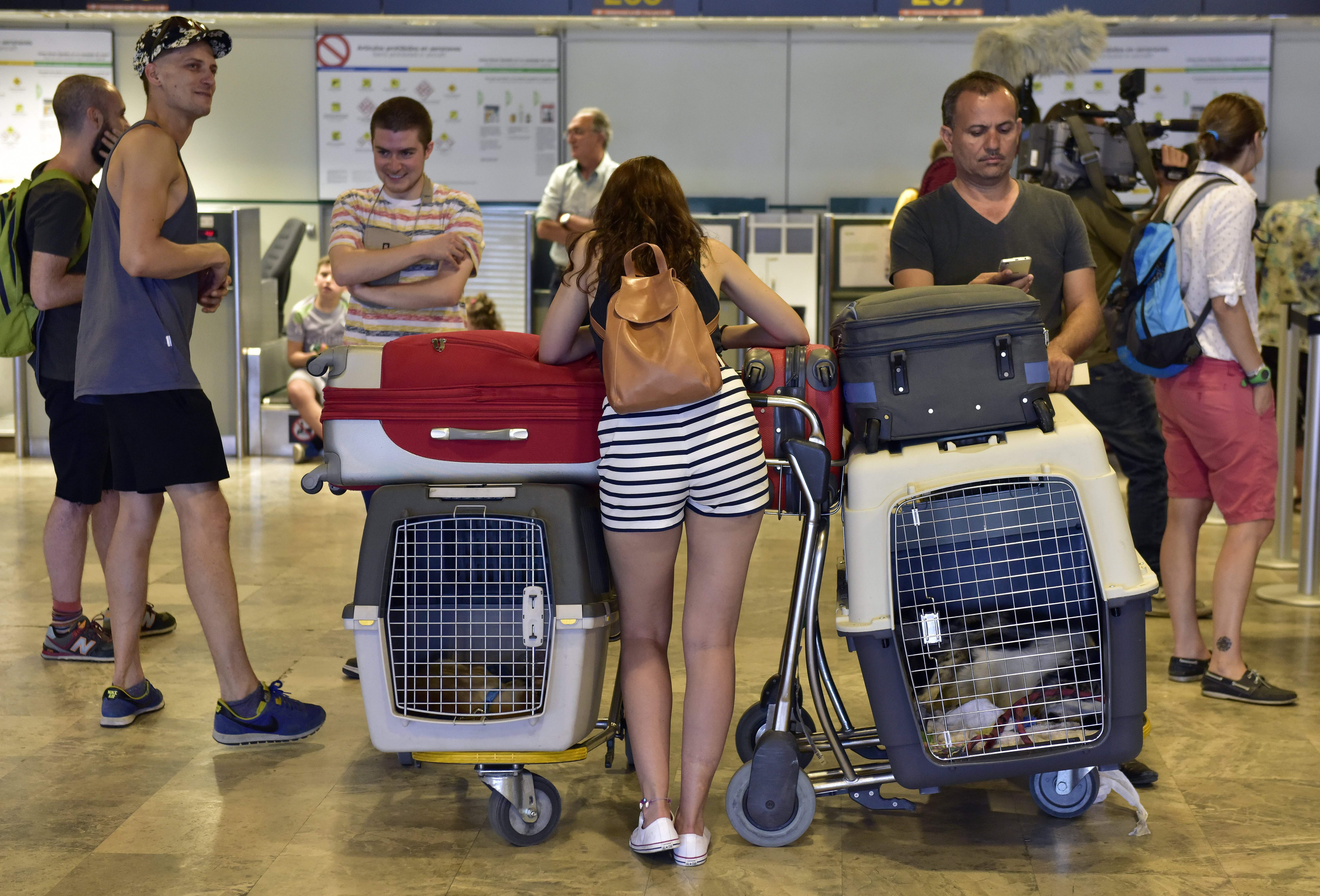 Pssengers and their pets wait to get a seat on an Aeromexico airways’s flight to Mexico at Madrid-Barajas international airport on 5 August 2016. Some 200 exasperated Aeromexico customers were camped out today at Madrid-Barajas airport, some for the past two weeks, waiting to see if in the coming days they will be able to fly to Mexico after purchasing at a low price dependent on availability. (GERARD JULIEN/AFP via Getty Images)

Airlines sub-contract animal transportation through the International Pet and Animal Transportation Association (IPATA). Kim Cunningham, communications director for IPATA, confirmed that with airline executives providing no plan for the companies supporting transport, military and government employees are being told to make other arrangements — even overseas.

“International pet movement, in most cases, takes many months of preparations to ensure that a vaccination and blood test schedule (as appropriate) is strictly followed to comply with the importing country’s regulations,” Cunningham told the Caller.

“International Pet and Animal Transportation Association (IPATA) have been working closely with their clients during this long period of no and slow movement due to border closures and country restrictions, and we are anticipating a flurry of booking requests to be submitted once restrictions start to ease as many pets are prepared and ready to fly,” Cunningham said.

Lufthansa Airlines is one of the major carriers contracted for overseas transport. The Caller spoke with Lufthansa customer service agents June 17 and confirmed that pets were not being booked for transportation. An agent told the Caller that only an email from corporate headquarters had been provided, suspending the transport of animals in cargo, with no date set for resuming services.

Tal Muscal, head of corporate communications for Lufthansa, told the Caller that Lufthansa had been “forced to suspend about 95% of its operations.” (RELATED: Report: Airlines Will Lose $100 Billion Because Of Coronavirus)

Muscal provided no timeline for resumption of pet transport.

United Airlines spokesperson Rachael L. Rivas told the Caller that the carrier has indefinitely suspended pet transport “due to the unprecedented effect of the COVID-19 pandemic on air travel … for the safety of pets until further notice.” Both the Centers for Disease Control and Prevention (CDC) and the World Health Organization (WHO) refute claims that pets can spread the virus.

Delta spokesperson Drake Castañeda confirmed the indefinite embargo on pet transport, but said Delta was making some exceptions for those on military or government orders. He did not respond to requests for further information as to how IPATA companies were to apply for these exceptions. 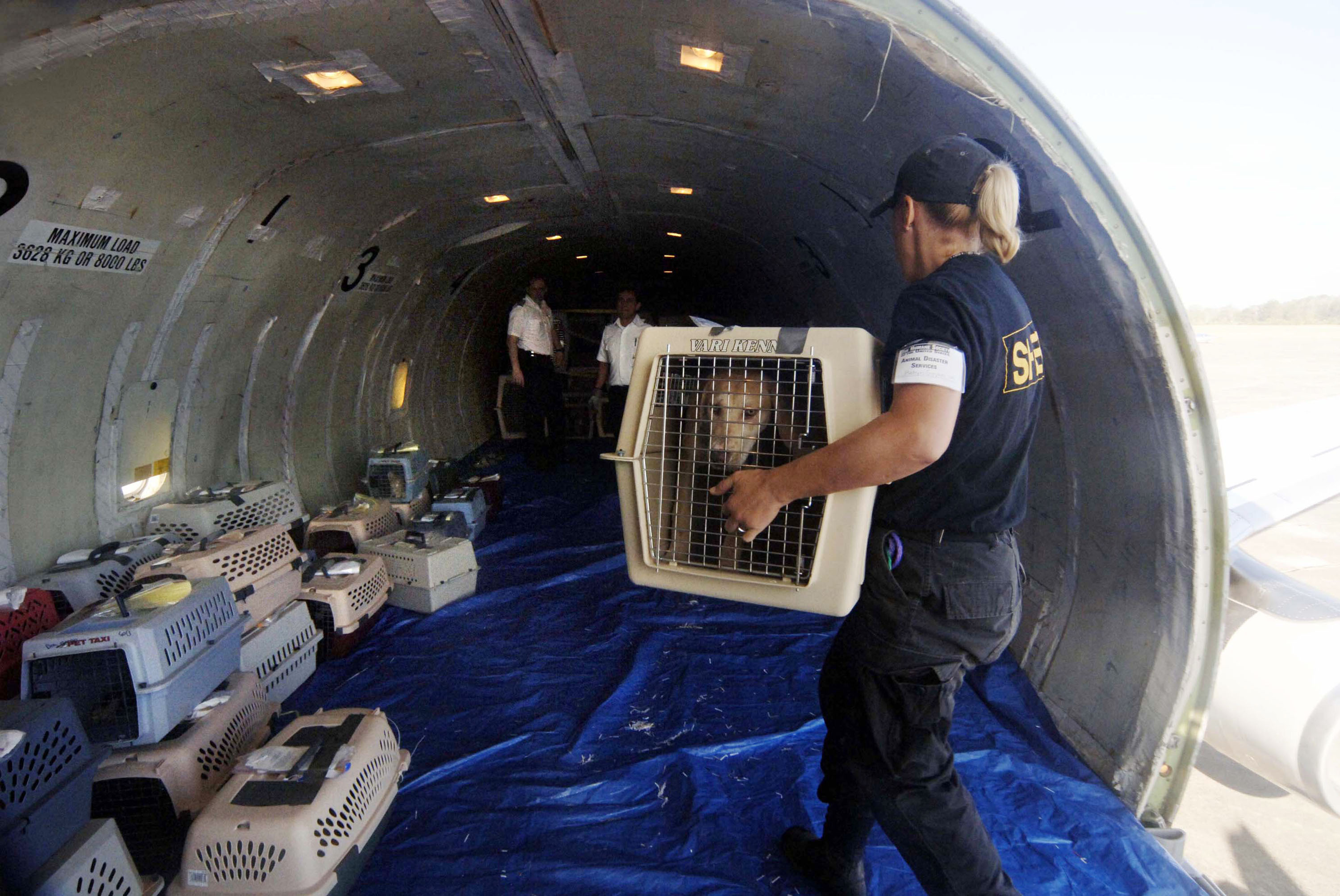 HATTIESBURG, MS – SEPT. 22: A worker with the Humane Society of Missouri loads a dog in a cage on a plane for flight transport to St. Louis, Missouri, Sept. 22, 2005 in Hattiesburg, Mississippi. The dog is one of over 100 being transported to be taken in by foster owners until they can be reunited with their owners or placed for permanent adoption. Together the United States Humane Society and the Humane Society of Missouri have rescued thousands of pets since Hurricane Katrina devastated the Mississippi Gulf Coast and New Orleans. (Photo by Marianne Todd/Getty Images)

“We require that our guidelines (based upon IPATA standards) be met when pets travel with us, but do not require travel to be booked through specific companies,” Rademacher told the Caller. “Some customers may choose to transport via a professional pet shipper to help with travel arrangements and customs clearance. We do offer this service as an add-on when booking from certain international destinations.”

When a service member deploys, they are required by the Department of Defense to provide a “family care plan,” but this doesn’t include plans for when pets are left stranded.

“Any good pet transport company would say that an owner must plan ahead and make alternate arrangements — it’s our responsibility to tell them this can happen,” said Linda Allison, an owner of Precious Pets Transport in military-heavy Hampton Roads, Virginia. “We are now suggesting they send their pets to family, friends or plan to board them as we face both the airline embargo and heat restrictions.”

When asked about pets being stranded, Allison said she had “never seen this happen long-term. This is new territory. If a pet missed a flight in the past, we would get them on the next available — sometimes that meant boarding, but not long-term. No, at this point, we’re telling them to plan to leave their pets with family or friends if they can.”

For now, it seems that there is limited support for military members and U.S. government employees who are moving overseas with pets in tow.

‘Leave no man behind,’ but perhaps you should be prepared to leave your dog.