A former spokesman for Hillary Clinton’s 2016 presidential campaign is shaming members of Facebook’s oversight board for supposedly allowing themselves to be deployed as public relations props while the social media platform “profits off hate.”

Nonprofit Accountable Tech launched a campaign Tuesday prodding members of the board into demanding greater authority over content on the platform. The nonprofit is also demanding the ouster of one of the board’s conservative members for reading a quote containing the n-word during a course he teaches on constitutional law.

The group is targeting Stanford Law professor Michael McConnell, a co-chair of the oversight board, which is made up of conservative and liberal judges who are tasked with determining whether specific comments, posts or links comply with Facebook’s terms of service. The judges can only review already-censored content, a limitation the nonprofit believes is unacceptable.

“He recently used a racial epithet in class and refused to apologize. Is this who should decide what constitutes acceptable speech? Michael McConnell has to go,” Accountable Tech wrote in a June 30 Facebook ad, referring to McConnell. NBC initiated reported on the ad campaign.

The ad referenced a quote McConnell made in May during a course on the creation of the United States Constitution. McConnell read the word to his students so they could understand the historical context of opposition to the Constitution, he told The Washington Post in June.

“I presented the quotation in its historical context, emphasized that they were not my words, and condemned their use,” McConnell wrote in an email at the time. “It is vitally important to teach the history of the American Founding warts and all, and not to bowdlerize or sugar-coat it.”

McConnell has not yet responded to the Daily Caller News Foundation’s request for comment on Accountable Tech’s ads.

Accountable Tech is the brainchild of former Clinton staffer Jesse Lehrich and Nicole Gill, a political organizer who helped found the 2017 Tax March. Lehrich worked as Clinton’s foreign policy spokesman and once warned in 2016 that Russia intervened on behalf of Trump’s campaign. 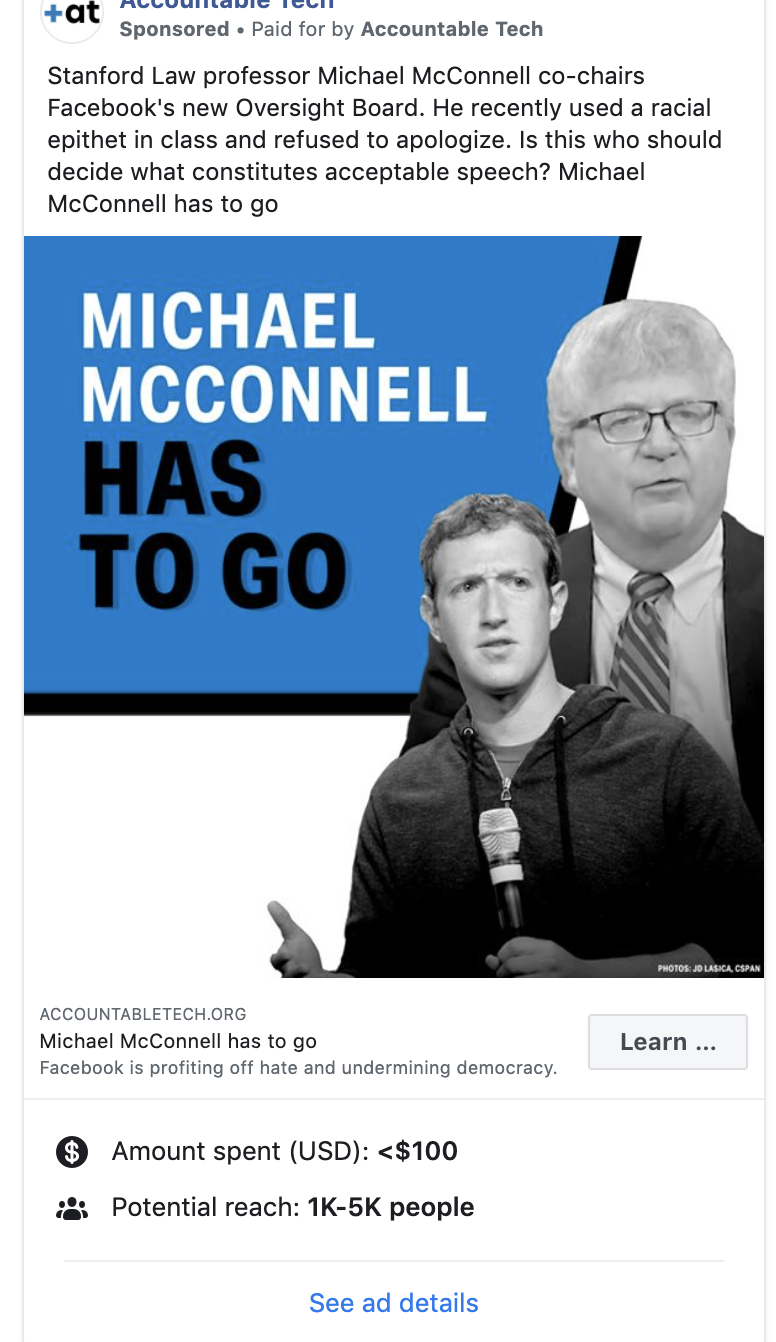 Accountable Tech’s campaign comes amid internal dissent inside Facebook over the platform’s handling of hate speech and misinformation, including a post Trump posted in May suggesting that “when the looting starts, the shooting starts.” The president clarified his comment in a tweet, telling his followers on May 29 that looting often leads to gun violence, something he wants to avoid.

The nonprofit produced ads in June lashing out at CEO Mark Zuckerberg for not censoring Trump’s comments. The ads reportedly targeted Facebook employees.

The independent oversight board named a slate of 20 members out of a projected full membership of 40 during its May 6 unveiling. Under this system, Facebook users who are unhappy with a moderator’s decision can file an appeal with the board, which will choose to take a handful of cases each year, similar to the Supreme Court.

“Jamal Greene is a constitutional law expert and lifelong advocate for progress. But now Mark Zuckerberg is using him and the toothless Oversight Board for cover as Facebook profits off hate and undermines democracy. Speak up or step down,” one of Accountable Tech’s ads state. The other ads accuse Aswad, Samples, and Karlan of being “PR props” for Facebook. 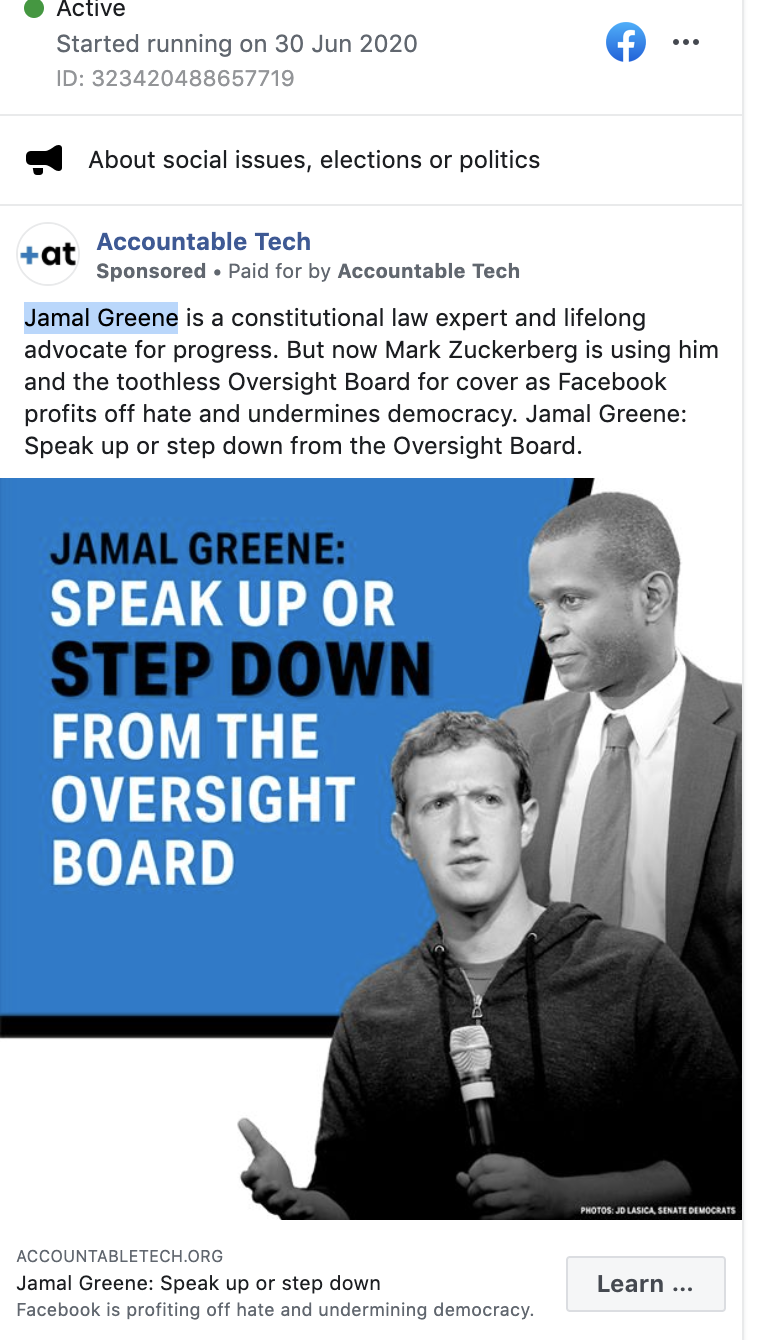 “Facebook is overrun by voting misinformation and hate,” Lehrich told NBC on Tuesday. “It’s incumbent on the board to demand they have legitimate authority to tackle these issues or they should quit.” (RELATED: Tale Of Two Silicon Valley Giants: How Facebook And Twitter Are Dealing With Calls To Ban Trump’s Content)

Accountable Tech does not focus exclusively on Facebook, Lehrich told the DCNF in June. The nonprofit focuses “disproportionately” on Facebook because the platform “has been uniquely egregious, and they have an outsized impact on the information ecosystem.” The group is also “keeping a close eye on Twitter” and other platforms, he said.

He added: “We’ll be rolling out more substantive policy recommendations in the days ahead that will not be limited to any one platform.”