The White House is framing President Donald Trump’s deregulatory initiative as a critical part of the post-coronavirus economic recovery, and Department of Housing and Urban Development Secretary Ben Carson said Thursday those policies will benefit black America and other minority communities in particular.

“President Trump has taken the necessary actions to eliminate regulatory barriers and provide opportunities for minority communities that previous Administrations talked about, but failed to do,” Carson told the Daily Caller. “As the Chair of the White House Council on Eliminating Barriers to Affordable Housing, I have traveled the country to sit down with minority communities to work to address and alleviate burdensome regulations that have disproportionally impacted Americans across the spectrum.”

Carson added that his department has “eased regulations to make housing more affordable, opened up pathways for alternative solutions to the housing challenges we face, and have returned power to localities who are more in tune with their unique community needs.”

Senior administration officials also briefed reporters ahead of a Thursday afternoon event on the White House South Lawn, where Trump is expected to deliver remarks alongside individuals who “have been transformed” by the administration’s policies. (EXCLUSIVE: Trump Says He ‘Should Be At 100 Percent’ Approval With Black Voters) 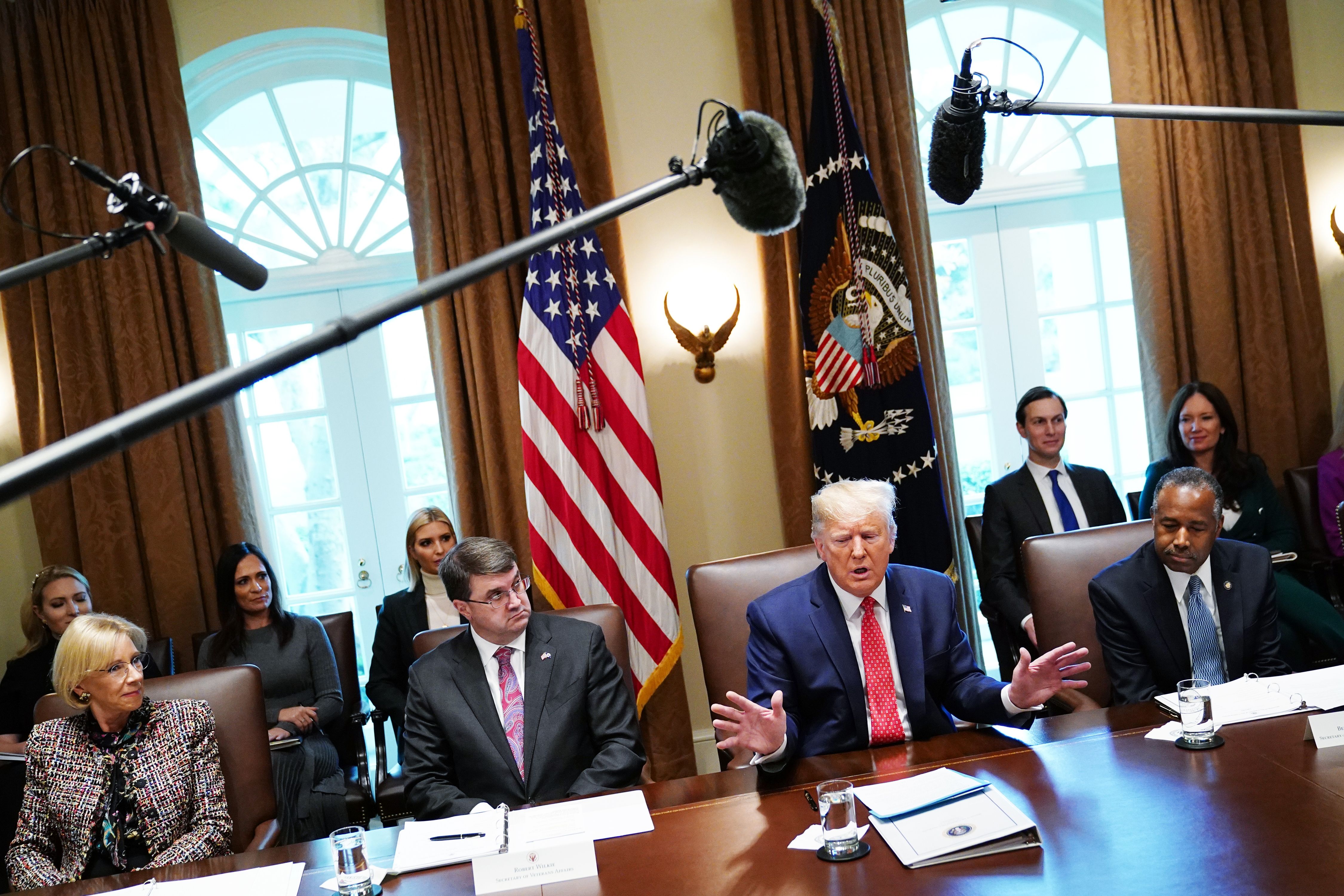 US President Donald Trump speak during a cabinet meeting in the Cabinet Room of the White House in Washington, DC on November 19, 2019, as (L-R) Education Secretary Betsy DeVos, Veterans Affairs Secretary Robert Wilkie, and Secretary of Housing and Urban Development Ben Carson listen. (Photo by MANDEL NGAN/AFP via Getty Images)

One official claimed that for every new regulation the administration has signed, it has rolled back seven. In response to a question from the Daily Caller about what specific deregulatory actions the administration is planning to boost black America, the officials said they didn’t want to “get out ahead of the president” on deregulation announcements.

Brooke Rollins, acting director of the Domestic Policy Council, told the Daily Caller in turn that the coronavirus pandemic not only illustrated but exacerbated economic disenfranchisement among African Americans. She pointed to Trump’s calls for school choice and recent investments to expand broadband networks as examples of the administration’s commitment to addressing the economic gap. Rollins also noted that the president specifically tapped Carson and White House Opportunity and Revitalization Council Executive Director Scott Turner to develop and implement additional avenues to help the black community through the end of the year and throughout a second term in office.

“We will continue this effort. Dr. Carson and several of the cabinet members have been really focused on it,” Rollins explained. “That will remain a priority for the president.” 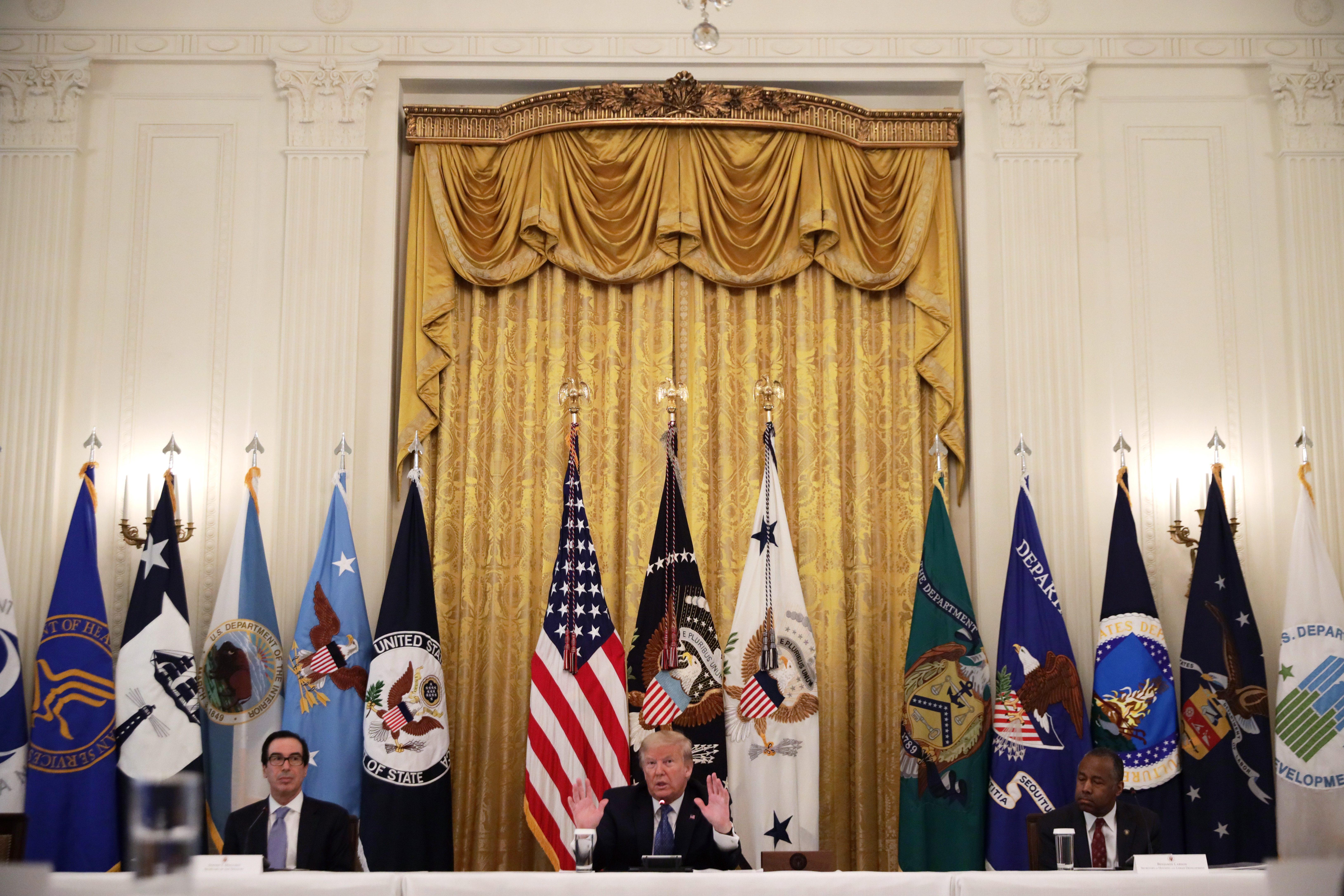 WASHINGTON, DC – MAY 19: U.S. President Donald Trump speaks as Secretary of the Treasury Steven Mnuchin and Secretary of Housing and Urban Development Ben Carson listen during a meeting with his cabinet in the East Room of the White House on May 19, 2020 in Washington, DC. Earlier in the day President Trump met with members of the Senate GOP. (Photo by Alex Wong/Getty Images)

Trump has taken a host of deregulatory actions to boost economic recovery from coronavirus. In May and June he signed executive orders waiving regulations prohibiting job growth and expediting construction projects.

He announced Wednesday an additional rule change to the National Environmental Policy Act that seeks to further streamline the approval process for infrastructure projects. The “One Federal Decision” policy requires that environmental reviews for infrastructure projects be limited to two years. Trump claimed that the previous regulations allowed the review process to last up to 20 years.

Still, the president’s critics have argued in recent months that the administration has not done enough to specifically address racial inequality. Trump told reporters in early June that the best way to address racially-charged police brutality was to lift up Black America was by reigniting economic growth for all Americans, a statement widely criticized by his political opponents.