Foreign powers are pouring into Libya as the country’s nearly decade-long civil war continues to heat up.

The western part of the country is now ruled by the internationally-recognized Government of National Accord (GNA) based in Tripoli, while the east is controlled by forces loyal to renegade Gen. Khalifa Haftar. The eastern-based parliament aligned with Haftar reportedly passed a resolution on Monday urging Egypt to militarily intervene in Libya to help stop what it calls a Turkish invasion and occupation of the country.

The war began when longtime dictator Muammar Qaddafi was overthrown by a NATO-backed revolution in 2011, prompting the two extant factions to form in 2014. Over the past several years, however, the conflict has turned into proxy war between numerous outside actors and foreign mercenary groups.

In recent months, Turkey has ramped up its military support for the GNA in a bid to acquire lucrative natural gas reserves located off just Libya’s coast. Turkey sent Syrian mercenaries to fight alongside GNA forces the Guardian reported in January, and provided air support for a recent offensive that has pushed Haftar’s troops back from the outskirts of Tripoli according to an Al Jazeera report from May.

The GNA’s growing success has alarmed neighboring Egypt, which reportedly fears that Haftar’s defeat would allow for Islamist forces aligned with the Muslim Brotherhood to take over Libya.

Egyptian President Gen. Abdel-Fattah el-Sissi warned that the Egyptian military would intervene in Libya if GNA forces and their Turkish occupied the strategic oil towns of Sirte and Jufrah, a move which he described as a “redline” for Cairo in a June Reuters report.

Turkey and Egypt are not the only major foreign players in Libya. Russia is also reportedly bolstering its military presence in the country, primarily through the use of private military contractors. There are between 800 and 1,200 Russian mercenaries currently fighting in Libya on behalf of Haftar, a recent report from the United Nations concluded. (RELATED: US Military Is Angry At Russia For Supporting Libyan Rebels, Escalating Tensions)

A United Nations report has concluded that Sudan and Jordan are providing the forces of Khalifa Haftar with illegal military support as he wages a brutal offensive on Libya’s Tripolihttps://t.co/4fIodBv6V6

U.S. Africa Command issued a statement on Wednesday claiming it had “verified photographic evidence” that Russian mercenaries are “indiscriminately” placing mines near the frontlines in Libya, reports the Military Times. The Pentagon has previously accused Russia of sending 14 fighter jets to Libya in support of its mercenaries there, per a Reuters report in May.

Libya’s National Oil Corporation reported in June that a contingent of Russian mercenaries and other foreign fighters had entered the country’s largest oil field.

The Kremlin, however, has repeatedly denied any Russian military involvement in Libya.

Russian Special Presidential Envoy for the Middle East and Africa and Deputy Foreign Minister Mikhail Bogdanov told Egypt’s Al-Ahram daily, “Information spread by some foreign sources, including the US State Department, that the Wagner Group’s members are present in Libya and participate in combat actions on the side of the Libyan National Army of Khalifa Haftar, largely relies on fabricated data and is aimed at discrediting Russia’s policy on Libya,” per Russian news agency Tass. 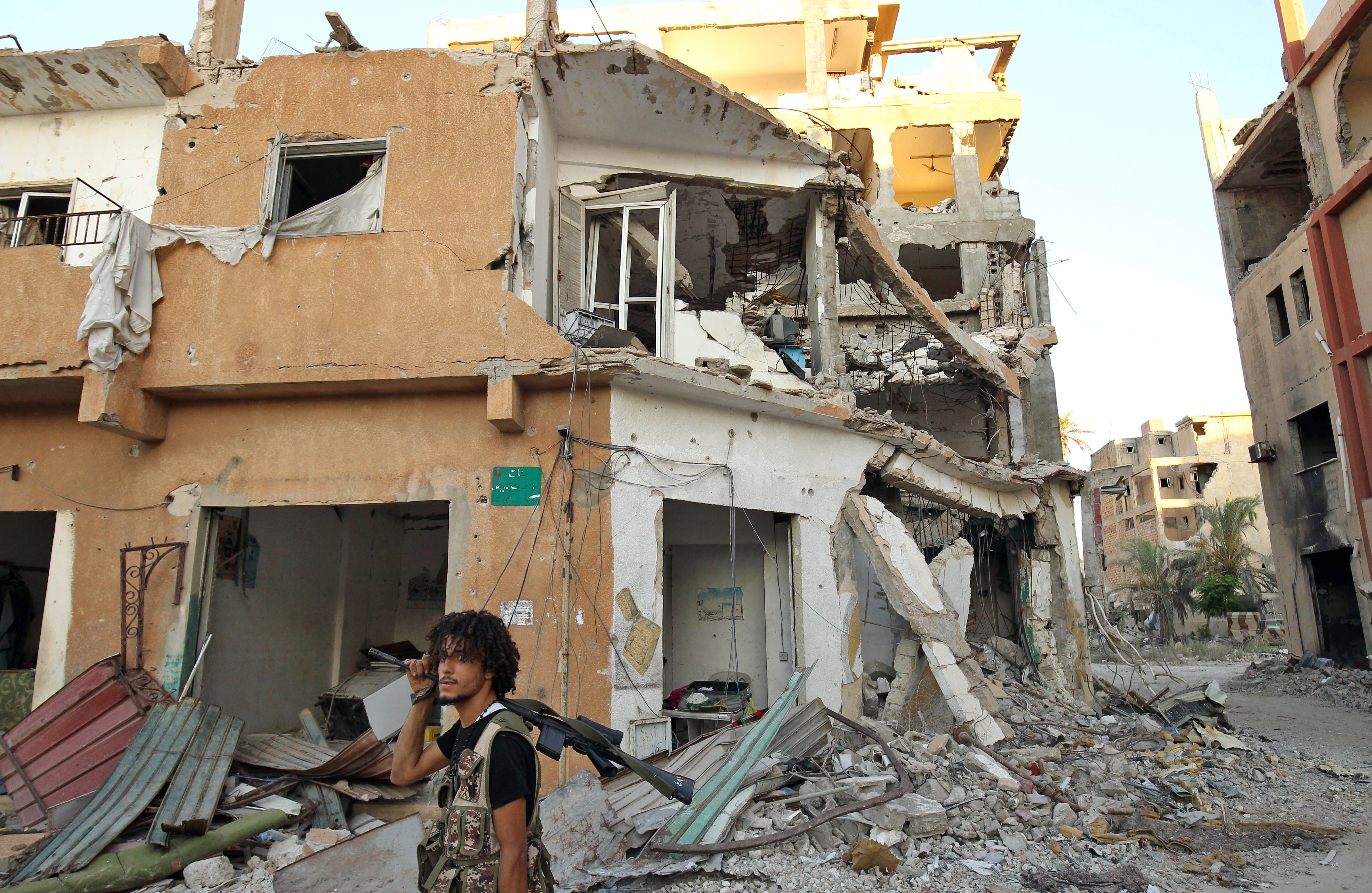 Members of the self-styled Libyan National Army, loyal to the country’s east strongman Khalifa Haftar, carries a rifle on his shoulder as he walks down a street in Benghazi’s central Akhribish district on July 19, 2017 following clashes with militants. Libyan military strongman Khalifa Haftar on July 5, 2017 announced the “total liberation” of second city Benghazi, which was overrun by jihadists three years prior. (ABDULLAH DOMA/AFP via Getty Images)

The war in Libya has had an “incalculable” impact on civilians since it began nine years ago, the United Nations reported in February. According to the United Nations’ estimates, nearly 900,000 Libyans currently require humanitarian assistance. The civil war has also revived open slave markets and extrajudicial killings in the country, per a 2018 Reuters report.

“In what has become an increasing pattern in and around Benghazi over the last two years, more bodies with signs of torture and hands bound were found in the streets,” Andrew Gilmour, U.N. Assistant Secretary-General for Human Rights, reportedly told the Geneva forum.

Gilmour also said armed groups are “the main perpetrators of grave human rights violations and act with almost complete impunity.” Detention centers run by armed groups, “including those with links to ministries” have the worst record, he said per Reuters.

The United States spearheaded the NATO intervention that toppled Qaddafi in 2011. Shortly after rebel groups killed the longtime dictator, then-Vice President Joe Biden touted the Obama administration’s military operation in Libya as a success story and a possible template for the future.

“NATO got it right,” he said, reported the Los Angeles Times. “In this case, America spent $2 billion and didn’t lose a single life. This is more the prescription for how to deal with the world as we go forward than it has in the past.”

In 2016, however, Biden was asserting that he had been “strongly against going to Libya” from the very beginning, as reported by CNN.