PORTLAND, Ore. — The Mark O. Hatfield Courthouse and federal officers continue to be targeted night after night in Portland, but some in the media are downplaying the violence.

Protests and riots in Portland are nearing 60 consecutive days. During that time, the courthouse and officers guarding it have repeatedly been subjected to violent acts by rioters, as Daily Caller reporters on the ground have reported. Despite this, many in the media have downplayed the violence, with CNN’s Brian Stelter claiming that it’s simply the “right-wing media” playing “up Portland protest ‘violence.'”

Stelter continued on to point to “local reporters” who appeared to tell the network that the blame for escalating violence was due to federal officers being deployed to guard the courthouse.

“Some local reporters, who have been hard at work covering Portland demonstrations since they first began, tell us there was a noticeable shift in protests after Trump sent in the Feds,” CNN correspondent Josh Campbell tweeted. “Protestors want the federal cavalry out now.”

Some local reporters, who have been hard at work covering Portland demonstrations since they first began, tell us there was a noticeable shift in protests after Trump sent in the Feds. Protestors want the federal cavalry out now. The Portland mayor tells @jaketapper he agrees. pic.twitter.com/nPF0HUu6Y0

Local reporters have not been the only ones downplaying the nightly violence. The Oregonian pushed back on claims of violence with a July 18 article titled: “Feds, right-wing media paint Portland as ‘city under siege.’ A tour of town shows otherwise.”

“And they occur exclusively during late-night hours in which only a couple hundred or fewer protesters and scores of police officers are out in the city’s coronavirus-hollowed downtown,” according to the newspaper, which described the violence as coming from “a small number” of “20- and 30-something demonstrators.”

Those events are hardly representative of daily life, including peaceful anti-racism demonstrations that have drawn tens of thousands of protesters, in a city of 650,000 people that encompasses 145 square miles. The vast majority of Portland residents spend quiet home-bound lives on hushed tree-lined streets with coronavirus and its resulting economic catastrophe as the greatest threat to their well-being.

While the violence is typically reserved for evening hours, the consistent barrage of attacks and methods used by rioters against the courthouse and officers is part of the story. It also seems that some in the media would be more comfortable dismissing the hours of violence each night.

Reporters on the ground have witnessed repeated attempts by large crowds to tear down fencing in front of the courthouse. Fires are often lit and firecrackers are launched at the courthouse and near officers standing guard. The crowd has been able to tear down the fence successfully on more than one occasion, and some shine lasers and lights into the eyes of federal officers.

Typically, the unrest begins in the evening and escalates as the night wears on. (RELATED: EXCLUSIVE VIDEOS: Portland PD Declares Riot, Works With Federal Officers To Battle Rioters After Courthouse Fencing Is Torn Down)

Officers often respond to escalations with tear gas, pepper bullets and other crowd control munitions. As the riots have continued, the crowd has become more aggressive and driven, often bringing shields and umbrellas that result in standoffs with officers.

Print newspapers such as the New York Times also pointed to “right-wing outlets” as seizing on the protests to push a narrative.

“Right-wing outlets and conservative media stars have seized on the weekslong protests in Portland as a rallying cry for law and order, instructing their followers to fear for their safety and blaming Democratic leaders for failing to restore peace,” the Times wrote on July 22.

“The nuances of the Portland protests — which reflect a diverse mix of grievances, including civil rights, anti-fascist causes and frustration with the president — have not been noted by the conservative media world,” the article continued. “Instead, in an echo of Mr. Trump’s portrayal, right-wing media has presented the situation as an urban nightmare. Far from recoiling at big-government interference, conservative hosts have loudly applauded the Trump administration for superseding city and state authorities.” 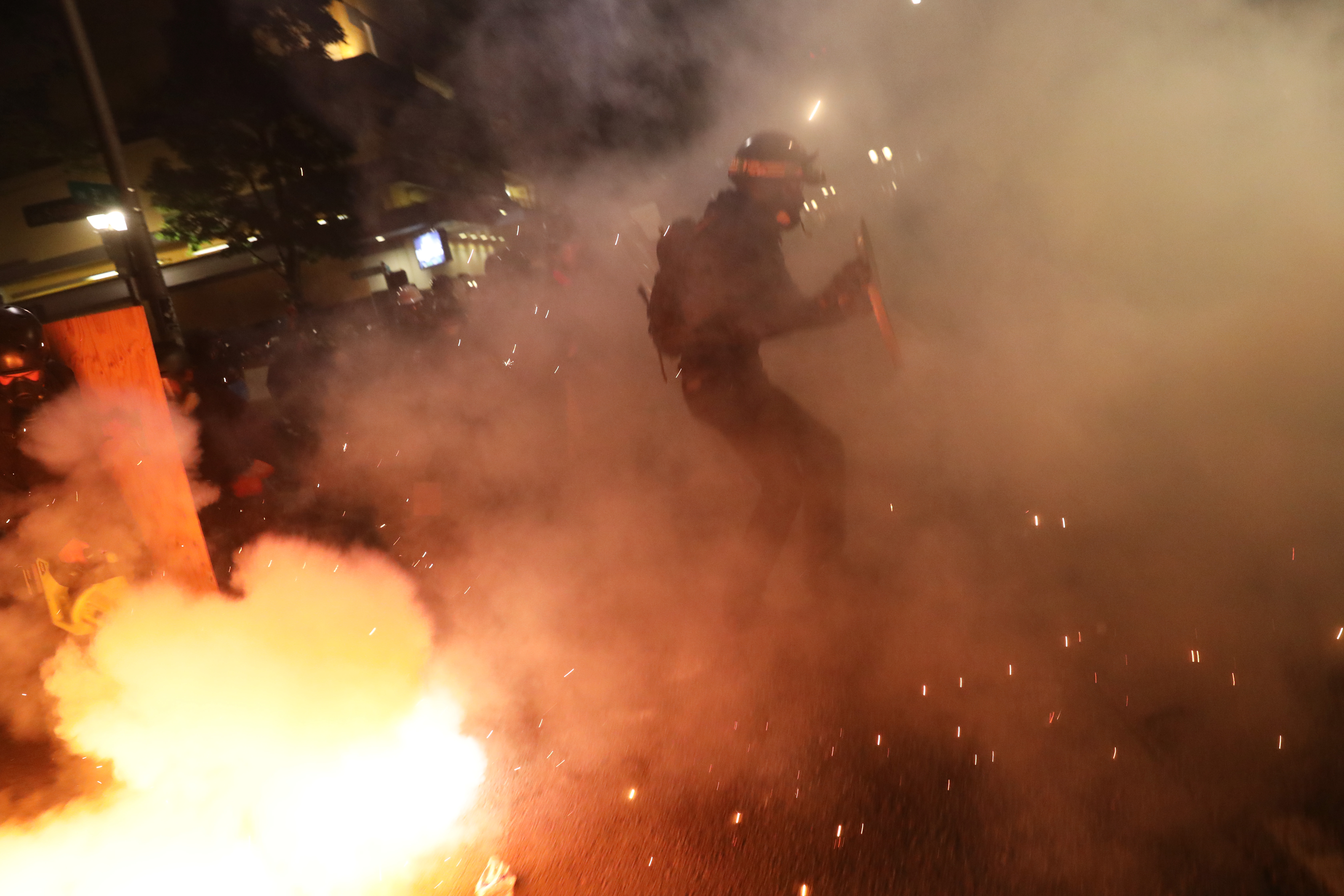 PORTLAND, OREGON – JULY 24: People gather in protest in front of the Mark O. Hatfield federal courthouse in downtown Portland as the city experiences another night of unrest on July 24, 2020 in Portland, Oregon. For 55 nights, protesters in downtown Portland have faced off in often violent clashes with the Portland Police Bureau and, more recently, federal officers. The demonstrations began to honor the life of George Floyd and other black Americans killed by law enforcement and have intensified as the Trump administration called in the federal officers. (Photo by Spencer Platt/Getty Images)

Newsbusters noted on July 23 that coverage of Portland “largely evaporated” on networks such as ABC, CBS and NBC following an escalation of violence on July 22.

“After noting that peaceful ‘protesters’ had ‘stormed the federal courthouse’ while shooting flares and fireworks (no mention of the rocks and bricks getting thrown, nor the attempts to maim officers by permanently blinding them with powerful lasers), [NBC] correspondent Erin McLaughlin reported: ‘Federal agents respond with tear gas. Portland police declared a riot. Among those gassed, Portland’s Democratic mayor,'” Newsbusters pointed out.

While McLaughlin noted that Portland Mayor Ted Wheeler, who is also the police commissioner, “was booed by protesters,” she failed to note that “police had been barred from helping the federal agents,” according to the publication.

Other shows on the the networks downplayed the evening’s violence, which saw rioters barricading officers inside the building and trying to set it on fire, Newsbusters reported.