Secretary of State Mike Pompeo signed an Enhanced Defense Cooperation Agreement with Poland on Saturday, marking the moment at a ceremony in Poland with President Andrzej Duda.

Trump and Duda announced plans to sign the agreement in June, and it appears to be part of Trump’s larger strategy of getting NATO nations to contribute their full financial shares toward the region’s defense.

Thousands of additional U.S. troops will now be transferred to Poland, with most of them coming from Germany, a country Trump has criticized for not contributing its fair share to the NATO defense fund.

“Our alliance cannot be at full strength without robust contributions from all allies,” Pompeo said in a statement. “President Trump is grateful for Poland’s leadership in contributing its fair share to our common defense.” (RELATED: Joe Biden’s Cold War Criticisms Of NATO And Germany Sound A Lot Like Donald Trump) 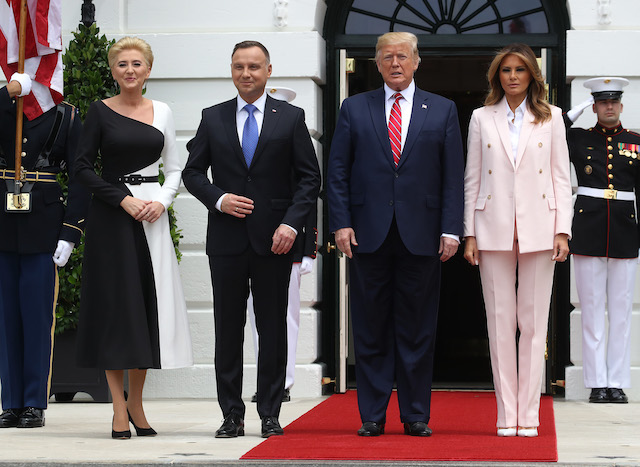 WASHINGTON, DC – JUNE 12: U.S. President Donald Trump and first lady Melania Trump welcome the President of Poland, Andrzej Duda and his wife Agata Kornhauser-Duda, after their arrival at the South Portico of the White House on June 12, 2019 in Washington, DC. The two leaders are scheduled to attends meetings at the White House before speaking at a Rose Garden news conference. (Photo by Mark Wilson/Getty Images)

Trump announced the withdrawal of 12,000 U.S. troops out of Germany on July 29, more than half of whom came back to the United States. Roughly 5,500 of the soldiers were re-deployed across Europe, including in Poland.

“We don’t want to be the suckers anymore,” Trump told reporters at the time. “The United States has been taken advantage of for 25 years, both on trade and on the military. We’re protecting Germany, so we’re reducing the force because they’re not paying the bills. It’s very simple. They’re delinquent. So we’re reducing the force. Now if they start paying their bills… I would think about it.”

While Duda has expressed gratitude to Trump for moving additional forces to Poland, he did express disappointment that troops were leaving Germany. Under the new system, more U.S. troops are present in Poland, but fewer are in Europe as a whole.

“I do not deny that I requested Mr. President that he would not withdraw U.S. forces from Europe because the security of Europe is very important to me,” Duda said at the White House in June.