Former President Bill Clinton, who will speak Tuesday night at the Democratic National Convention, has faced allegations of rape and sexual assault and reportedly traveled and vacationed with convicted sex offender Jeffrey Epstein.

Clinton’s Tuesday night speech follows the release of photos showing him receiving a massage from an alleged Epstein victim. Clinton and Epstein’s relationship has continued to draw attention throughout the summer of 2020 following the arrest of Epstein’ cohort, Ghislaine Maxwell.

Apart from suspicions about his relationship with Epstein, who died in jail in 2019 from apparent suicide while facing charges of sexual trafficking, Clinton has been accused of sexually harassing Paula Jones, of raping Juanita Broaddrick, of sexually assaulting Kathleen Willey, and of repeatedly sexually assaulting Leslie Millwee.

Clinton did not respond to requests for comment regarding this story. He has denied all of these allegations. 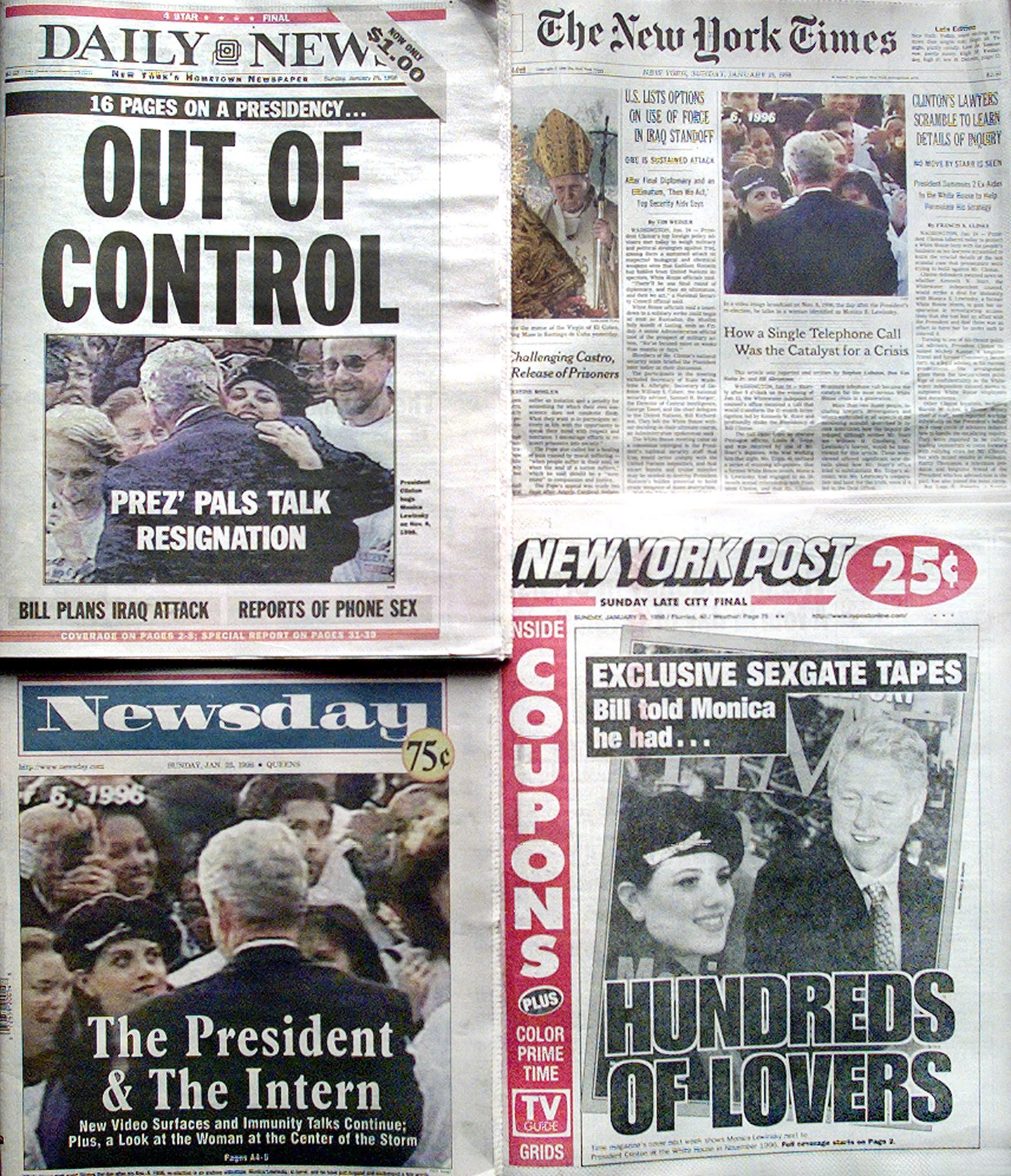 Clinton notoriously had an affair with a subordinate, Monica Lewinsky, while he was president of the and she was a 22-year-old White House intern. Clinton was 27 years older than Lewinsky at the time.

House Republicans impeached him, saying that Clinton had lied to federal investigators after he initially denied the relationship with Lewinsky, but the Senate acquitted him and Clinton stayed in the White House until 2001.

Lewinsky reflected on the experience in light of the #METOO movement to Vanity Fair in February 2018, noting that though she has called the relationship consensual and will not call it “sexual assault,” she also believes that it constituted “a gross abuse of power.”

“I now see how problematic it was that the two of us even got to a place where there was a question of consent,” she adds. “Instead, the road that led there was littered with inappropriate abuse of authority, station, and privilege.” 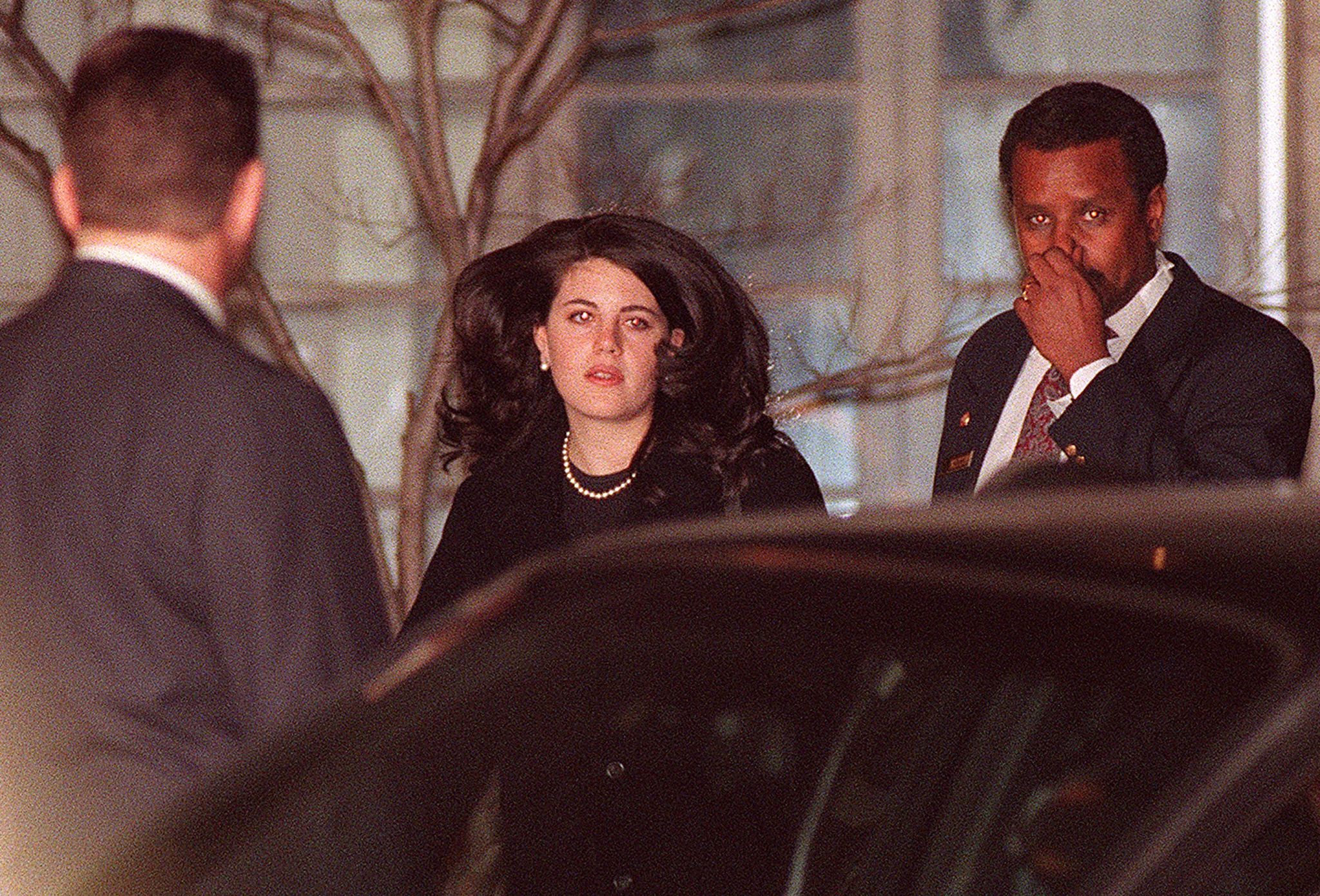 Monica Lewinsky (C), the former White House intern who allegedly had an affair with US President Bill Clinton, walks to a waiting car 29 January at the Cosmos Club in Washington DC. (TIMOTHY CLARY/AFP via Getty Images)

Former Arkansas state employee Paula Jones told Sean Hannity in 2016 that Clinton exposed his genitals to her and propositioned her for sex in 1991 during a government quality-management conference.

Jones said that state police approached her at the conference and told her that then Governor Clinton wished to meet her. A state police officer escorted her to Clinton’s hotel room, Jones alleges.

“He sat down, pulled down his pants, his whole everything and he was exposed, and I said, ‘I’m not that kind of girl, and I need to be getting back to my desk,'” Jones told Hannity. When she tried to leave the room, she said, Clinton rushed to the door and grabbed it, allegedly telling her, “You’re a smart girl — let’s keep this between ourselves.”

The police officer was standing outside the door the whole time, she said, and was smirking when she left the hotel room.

Jones sued Clinton for sexual harassment after she went public with her allegations in 1994, Business Insider reported. In 1998, her lawsuit was dismissed by a judge on the basis that she had not proved that the incident had harmed her personally or professionally.

Jones would appeal the ruling, according to Business Insider, and Clinton paid her $850,000 in part of an out-of-court settlement agreement without admitting liability. Clinton adamantly denied propositioning Jones.

Jaunita Broaddrick has accused Clinton of raping her. The Washington Post broke Broaddrick’s allegations in February 1999. Broaddrick told the publication that she met Clinton in April 1978 when he was 31 and the Arkansas attorney general running for governor. She was working as a volunteer for his campaign, the Post reported.

Broaddrick, who was 35 at the time, said she met Clinton while he stopped at the nursing home she owned in Van Buren. She said the two chatted and he invited her to his campaign office, an invitation which she accepted. Clinton later changed the location to her hotel coffee shop, then told her too many reporters were in the lobby and asked if they could have coffee in her room.

“Stupid me, I ordered coffee to the room,” Broaddrick told the Post. “I thought we were going to talk about the campaign.”

Broaddrick alleges that Clinton began kissing her, though she resisted, after which he allegedly pulled her onto the bed and raped her. Broaddrick told the Post that she did not scream as the alleged incident happened very quickly, and that Clinton grabbed onto her lip with his mouth, leaving it bruised and swollen.

“The last thing he said to me was, ‘You better get some ice for that.’ And he put on his sunglasses and walked out the door,” she told the Post.

Clinton’s legal team denied her allegations, the publication says, noting that when Jones’ attorneys had subpoenaed Broaddrick as part of Jones’ lawsuit, Broaddrick had testified in deposition that Clinton did not treat her inappropriately. She would later recant that testimony.

“Any allegation that the president assaulted Ms. Broaddrick more than 20 years ago is absolutely false,” said Clinton attorney David E. Kendall in a White House statement, the Post reported. “Beyond that we are not going to comment.”

Katherine Willey, a former White House volunteer, alleges that Clinton kissed her and touched her breasts without her consent and forced her to touch his genitalia in the Oval Office in 1993.

In an interview with Ed Bradley broadcast March 15, 1998, Willey alleges that she was “friends” with Clinton and had asked him for a promotion to a paying job after confiding in him about her husband’s financial difficulties. She said Clinton sympathetically suggested they speak privately in the Oval Office, where he allegedly assaulted her.

“My mind was racing and I thought: ‘Should I slap him? Or should I kick him? Or knee him?'” Willey told Fox News’ Sean Hannity in October 2016. “What do I do? Scream? Is the Secret Service gonna come in and descend upon me with guns?”

Clinton has said that he hugged Wiley and might have kissed her forehead, “emphatically” denying that his interaction with Willey was sexual, according to Business Insider.

Former television reporter Leslie Millwee alleges that Clinton sexually assaulted her in 1980 on multiple occasions. Millwee worked at a TV station in Arkansas where she said the incidents occurred.

“He followed me into an editing room,” Millwee told Breitbart News in October 2016. “It was very small. There was a chair. I was sitting in a chair. He came up behind me and started rubbing my shoulders and running his hands down toward my breasts. And I was just stunned. I froze. I asked him to stop. He laughed.”

She also described another occasion in which Clinton allegedly assaulted her: “He came in behind me. Started hunching me to the point that he had an orgasm. He’s trying to touch my breasts. And I’m just sitting there very stiffly, just waiting for him to leave me alone. And I’m asking him the whole time, ‘Please do not do this. Do not touch me. Do not hunch me. I do not want this.'”

On a third occasion, she say she did not know Clinton was in the building but that he “basically the same thing he did on the second time.”

After this third alleged assault, Millwee says Clinton came to her apartment and repeatedly knocked on her door for “probably five, ten minutes” calling her name and saying, “I know you are home. Please answer the door.” 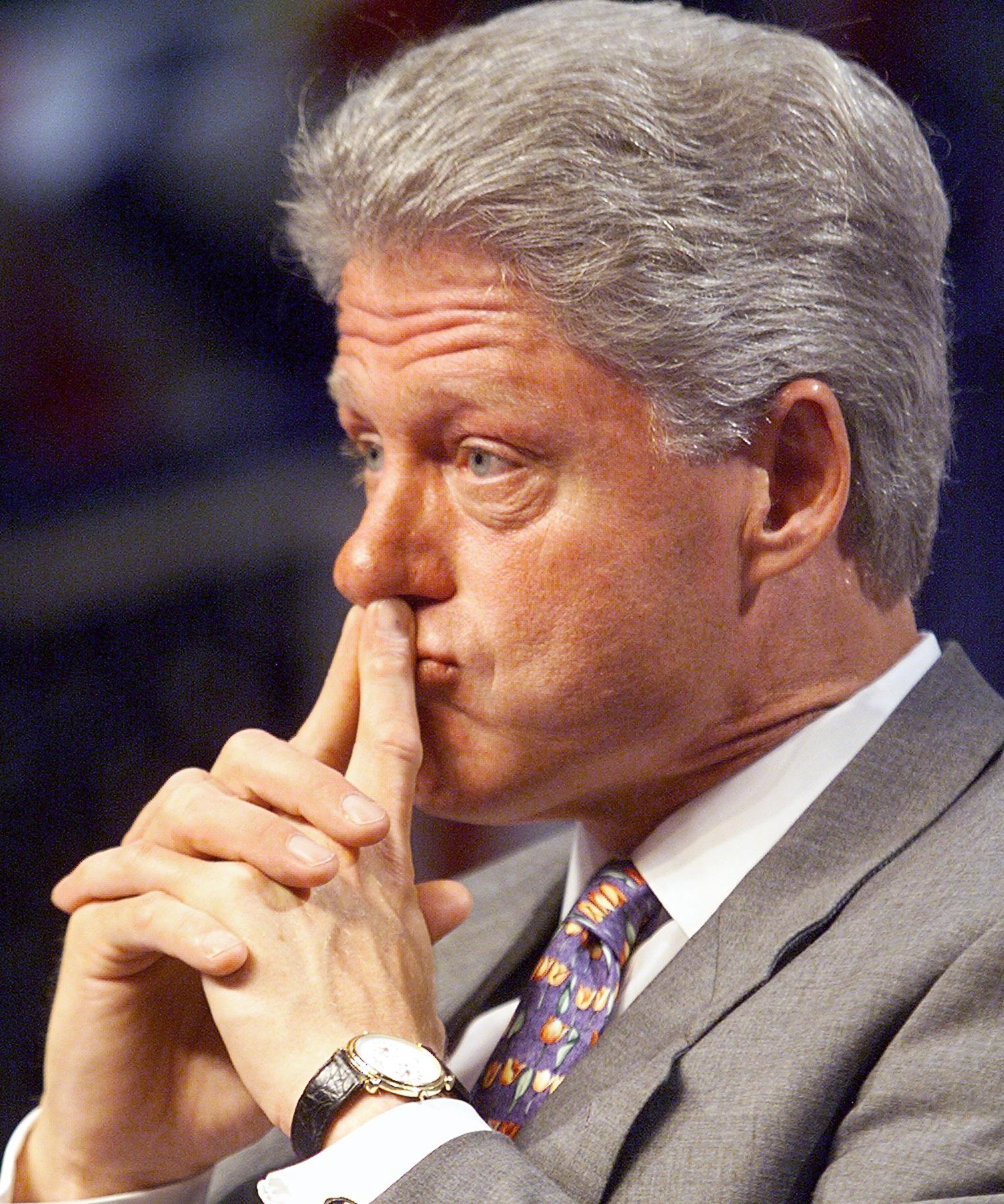 US President Bill Clinton listens to a speaker 27 July during a meeting on the Social Security hosted by the Concord Coalition at the University of New Mexico in Albuquerque. (LUKE FRAZZA/AFP via Getty Images)

“I did not answer the door,” she told Breitbart. Millwee said that her grandmother was staying with her at the time because she was afraid of Clinton. The following day, Millwee said she saw Clinton at a fair where neither of them acknowledged his alleged visit the night before.

The alleged incident was “the final straw” for Millwee, who told Breitbart that she decided to leave her job at the station.

Millwee had formerly written about Clinton allegedly touching her inappropriately, flirting with her, and showing up to her house in a book she published in January 2011, Breitbart noted. The book also says that she introduced her grandmother to him at the fair, an encounter that conflicts with her story to Breitbart.

The book, and her allegation, received little attention, according to Breitbart.

A Clinton spokesman told Newsweek in July that Clinton had “never been to Little St. James Island.”

Photographs reported by the Daily Mail Tuesday depict Clinton leaning back in an airport chair dressed in a yellow shirt and tan slacks, smiling and laughing as alleged victim Chauntae Davies rubs his shoulders.

Davies told the Daily Mail that the photos were taken in September 2002 after Clinton fell asleep on Epstein’s plane when Clinton and Epstein were traveling to Africa on a humanitarian trip.

Clinton was 56 at the time of the photos and Davies was 22, the publication reported. Davies has claimed that Epstein’s cohort Maxwell recruited her and that Epstein raped her several times, according to the Daily Mail.

Davies told the Daily Mail that Clinton was a “complete gentleman” during the trip and that Maxwell had urged her to give him a neck massage after Clinton complained of having a stiff neck from his nap.