“This isn’t hard. Vigilantism is bad. Police officers shooting black people in the back is bad. Looting and property damage is bad,” Murphy wrote in the now-deleted tweet, which was posted Thursday morning. “You don’t have to choose. You can be against it all. You can just be for peace.” 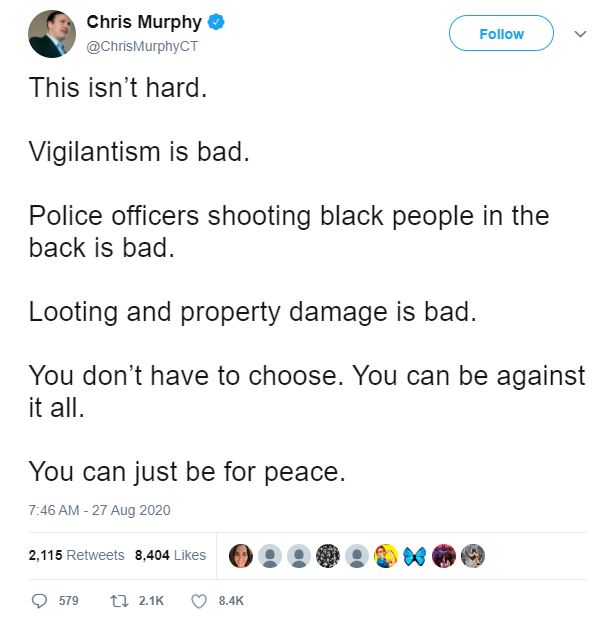 Murphy said he deleted the tweet because it “mistakenly gave the impression that I thought there was an equivalency between property crime and murder.”

I don’t normally delete tweets, but just got rid of one that mistakenly gave the impression that I thought there was an equivalency between property crime and murder.

Of course I don’t think that. So I just took it down.

Murphy deleted his condemnation of looting as riots have gripped Kenosha, Wisconsin, for days following the police shooting of Jacob Blake. (RELATED: Daily Caller Reporter Richie McGinniss Rushes To Save Life Of Man Who Was Shot In Head During Kenosha, Wisconsin, Riots)

Looting and rioting also broke out in Minneapolis on Wednesday afternoon after a homicide suspect committed suicide inside a shopping mall after he was surrounded by police.

Daily Caller contributor Kyle Hooten was robbed at gunpoint as he was covering the Minneapolis riots Wednesday evening.

Public support for protests has plummeted 25 points in Wisconsin since the police-custody death of George Floyd in late May, according to a poll released Wednesday.