Some Kenosha residents are rethinking their support for Democrats amid the rioting and violence that has erupted in the city, the New York Times (NYT) reported.

Several residents of the Wisconsin city expressed their fear in an interview with the NYT as the riots that struck many cities across the country following police shootings of Black men arrived at their doorstep.

Jacob Blake was shot by police Sunday in Kenosha, and later that night, unrest began to escalate, resulting in arson, vandalism and, a few days after, two people being shot to death. 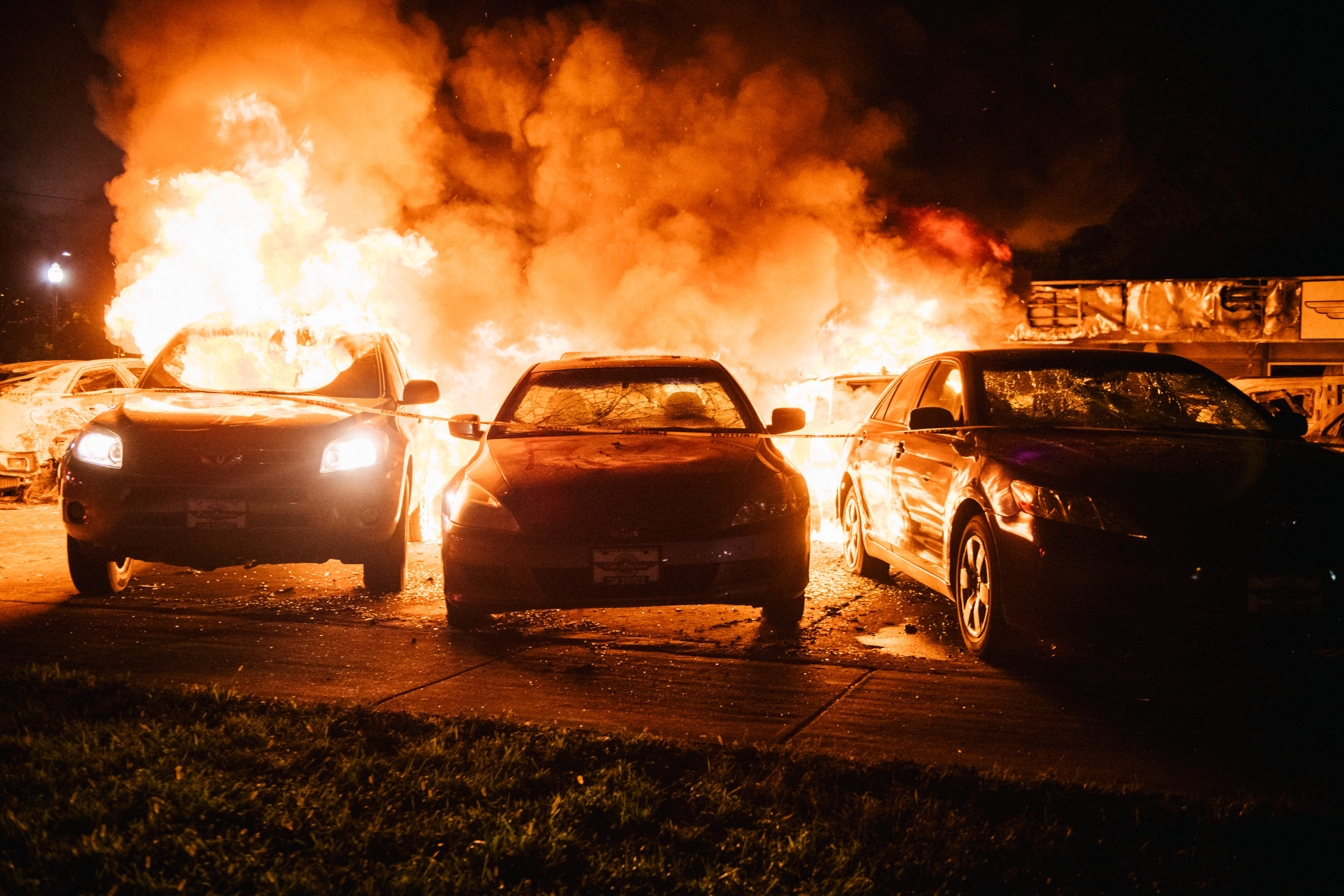 KENOSHA, WI – AUGUST 24: Cars are set on fire in a used car lot on August 24, 2020 in Kenosha, Wisconsin. This is the second night of rioting after the shooting of Jacob Blake, 29, on August 23. Blake was shot multiple times in the back by Wisconsin police officers after attempting to enter into the drivers side of a vehicle. (Photo by Brandon Bell/Getty Images)

Many residents say that Democratic leadership has been absent, and Democrats seem reluctant to denounce the violence.

John Geraghty, 41, works at a tractor factory and doesn’t pay attention to the presidential race. Although he was on the fence about who to vote for in November, he’s now unsure whether the Democratic state leaders are willing to remedy the violence.

“It’s crazy that it’s now happening in my home city,” he told the NYT. “We have to have a serious conversation about what are we going to do about it. It doesn’t seem like the powers that be want to do much.”

Former Vice President and Democratic presidential nominee Joe Biden responded Monday to the shooting of Jacob Blake, saying that “Equal justice has not been real for black Americans and so many others” and that the country “must dismantle systemic racism.”

Biden later condemned Wednesday the “needless violence” in Kenosha, and said that the protests over police brutality were “right and absolutely necessary” but that “burning down communities is not protest.”

Once again, a Black man — Jacob Blake — was shot by the police. In front of his children. It makes me sick.

Is this the country we want to be?

Needless violence won’t heal us. We need to end the violence — and peacefully come together to demand justice. pic.twitter.com/WdNqrxA3PK

Republicans have focused their attention on Wisconsin, which Trump won in 2016. The rioting was also mentioned at the Republican National Convention, which is taking place the same week that riots emerged in Kenosha.

Geraghty, a former Marine, told the Times his city began to resemble a “war zone” and that Democrats were “letting people down big time.” He also believes Trump bungled his management of the coronavirus pandemic, describing it as “laughable,” and that he didn’t like how Trump talked.

But he also said that it seemed the Democratic Party seemed most interested in attacking Trump and calling him a racist, an accusation made so often that it was only alienating people.

“The Democratic agenda to me right now is America is systematically racist and evil and the only people who can fix it are Democrats,” he said. “That’s the vibe I get.”

“I’m not 100 percent sure of anything yet,” Mr. Geraghty said of November. “But as of now I’m really not happy about how Democrats are handling any of this.”

The RNC dedicated several moments to emphasizing Trump’s “law and order” platform, and also criticized the movement to defund the police, attributing such a push to Democratic leadership. 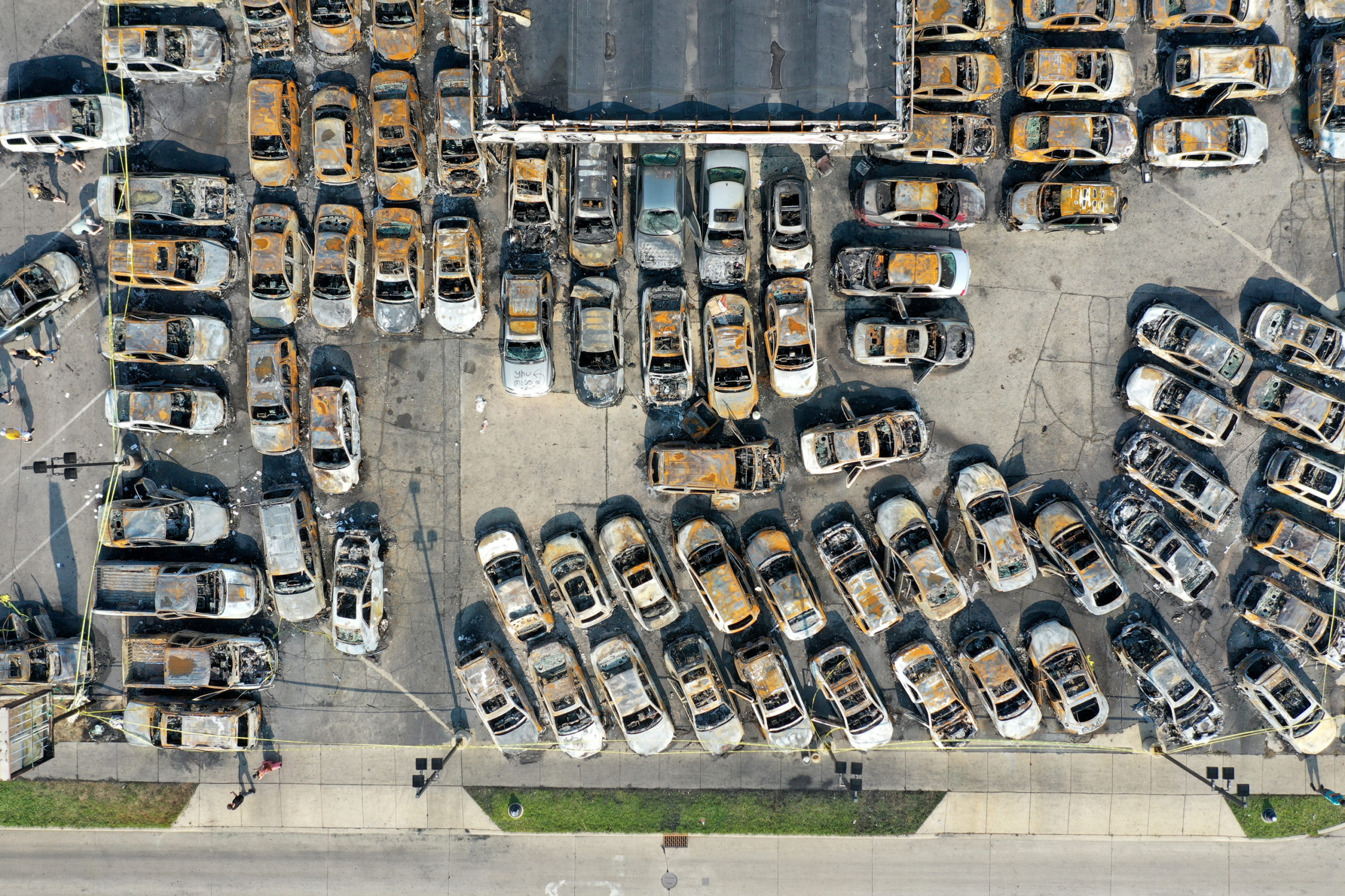 KENOSHA, WISCONSIN – AUGUST 25: An aerial view shot with a drone shows cars destroyed by fire at a used car lot following another night of unrest on August 25, 2020 in Kenosha, Wisconsin. (Photo by Scott Olson/Getty Images)

Public support for protests following the death of George Floyd has dropped in Wisconsin by 25 points since June according to a poll published by Marquette Law School Wednesday. While support for demonstrations against police killings stood at 61% approval to 36% disapproval in June, both figures changed to 48% in August. The poll was conducted before the protests and riots in Kenosha that began Sunday. (RELATED: POLL: Support For Protests Plummets In Wisconsin, Dropping 25 Points In Two Months)

Don Biehn, 62, owns a flooring company in Kenosha, and he bought a pistol for the first time in his life Tuesday amid the chaos in his city, citing the need to protect his business. He told the NYT he had been calling county and state officials for days to explain how grave the situation was in Kenosha.

“There’s people running all over with guns — it’s like some Wild West town,” Biehn said. “We are just waiting here like sitting ducks waiting to get picked off.”

“It’s chaos — everybody is afraid,” he added.

Although Biehn didn’t initially support Trump, he’s now grateful he’s president because he understand the situation in a way other politicians didn’t.

“There’s nobody fighting back,” he said. “Nobody is paying attention to what’s going on.”

Priscella Gazda, a waitress at a pizza restaurant, said she had voted only once in her life, and it was for Barack Obama in 2008, in hopes of getting health insurance. She told the Times she’s “not the one who would ever vote,” but after the unrest in Kenosha, she’s voting for Trump.

“He seems to be more about the American people and what we need,” she said.