Washington, D.C., Mayor Muriel Bowser said Tuesday she looks forward to advancing the recommendations made in a report that urged her to remove, relocate or contextualize the Washington Monument because of its “disqualifying” history.

The District of Columbia Facilities and Commemorative Expressions (DCFACES) said in a report Monday that it was tasked with evaluating whether statues and memorials in the city should be removed or contextualized if the historical figures they represent participated in “slavery, systemic racism, mistreatment of, or actions that suppressed equality for, persons of color, women and LGBTQ communities and violation of the DC Human Right Act.”

The working group recommended that Bowser, a Democrat, use her position on the National Capital Memorial Advisory Commission to support the removal or contextualization of the Christopher Columbus Fountain, the Benjamin Franklin Statue, the Andrew Jackson Statue and the Jefferson Memorial. 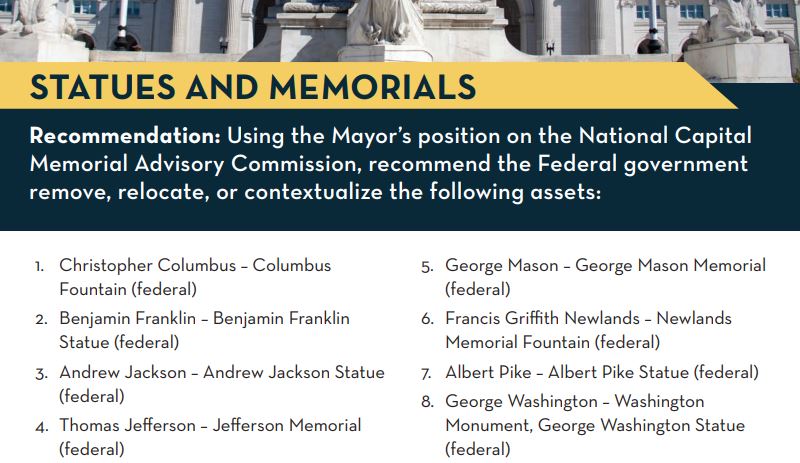 Bowser said looked forward to “reviewing and advancing” the recommendations made in the working group’s report in a tweet Tuesday.

This July, I tasked the DCFACES Working Group with evaluating public spaces to ensure the namesake’s legacy is consistent with #DCValues.

They have delivered the report, and I look forward to reviewing and advancing their recommendations.

DCFACES also urged the city to identify a diverse cast of candidates to honor in the city with statues, noting that 70% of the statues and memorials in the nation’s capital are named after white men. (RELATED: Christopher Columbus Statue In Philadelphia To Be Removed Because It Attracts Violence)

“Priority should be placed on ensuring future assets, especially and including those recommended for renaming by this Working Group, include more women, people of color and LGBTQ Washingtonians,” the report read.

“Across the country, communities are reflecting upon the systemic racism which has been engrained in our culture through policies and expressions impacting African Americans and other groups subject to discrimination,” DCFACES Co-Chair and Senior Advisor Beverly Perry said in a statement Tuesday. “This week we delivered recommendations to assure our assets in contemporary DC reflect concurrent DC values.”

DCFACES Co-Chair and DC Public Library Executive Director Richard Reyes-Gavilan said that the “vast majority of the people we heard from agreed that the District should take action on public namesakes that are inconsistent with our DC Values.”

“And one thing was clear: DC residents consider being the namesake of a public asset a high honor that should be reserved for esteemed persons with legacies that make DC proud,” Reyes-Gavilan added.