First lady Melania Trump has been making more headlines than usual over the past week thanks in part to her Tuesday night speech at the RNC and also to the reopening of the White House Rose Garden after its redesign the week prior.

Bette Midler and others mocked the first lady’s speech, with Midler implying she was a mail-order bride. The Rose Garden rework was discussed online as Trump having “stripped” the garden, others saying she “cut down Jackie’s [Kennedy] trees,” and some even speculating that the designs harbored secret white supremacist messaging. But little media coverage is offered to Trump’s BE BEST initiative, her chief initiative as first lady. Here’s a look at what is arguably her real legacy as first lady.

The BE BEST initiative was launched in May of 2017. Its stated focus is on ensuring children have a voice in government even while they’re too young to vote and that the government advocates for the nation’s innocents by promoting their physical, social and mental health and development. 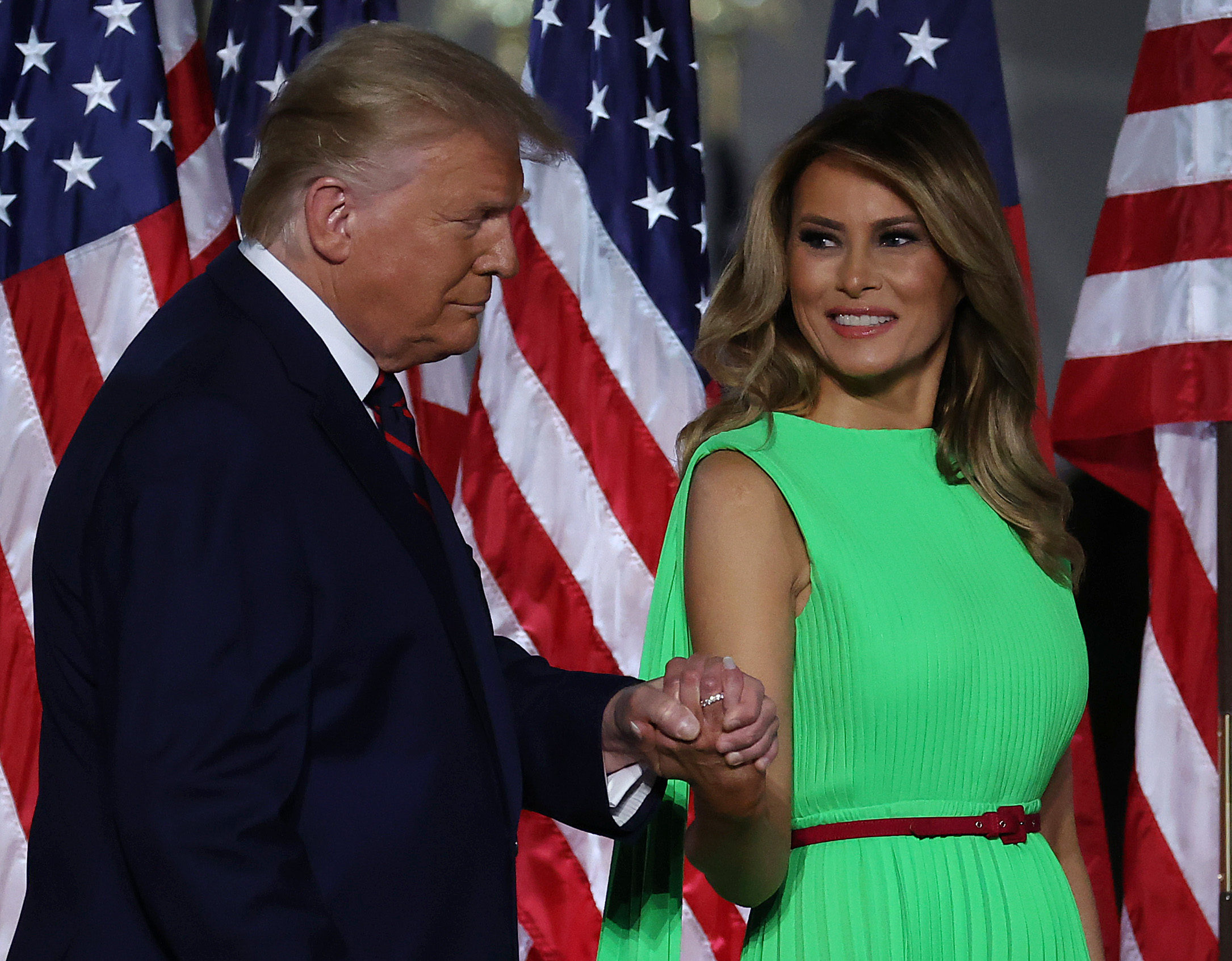 WASHINGTON, DC – AUGUST 27: U.S. President Donald Trump leads first lady Melania Trump off the podium as he prepares to deliver his acceptance speech for the Republican presidential nomination on the South Lawn of the White House August 27, 2020 in Washington, DC. (Photo by Chip Somodevilla/Getty Images)

While some have criticized BE BEST for being light on substantive policy proposals and concrete legislative items, Trump’s approach has predominantly focused on reforms and efforts within the executive branch.

Despite the criticism, the first lady has engaged in a rigorous but inconspicuous campaign to advance children’s well-being, online safety, and the opioid epidemic — the “three pillars” of the BE BEST initiative.

The first pillar, the promotion of children’s well-being, covers an array of topics ranging from living a healthy lifestyle to instilling values such as kindness and respect. This focus gave rise to the Executive Order on “Strengthening the Child Welfare System for America’s Children.”

The order seeks to improve the foster care system by “facilitat[ing] close partnerships between State agencies and nongovernmental organizations, including public, private, faith-based, and community groups” that often lead to improved outcomes for affected children, and use technology to improve accessibility of educational material and health care for foster families. 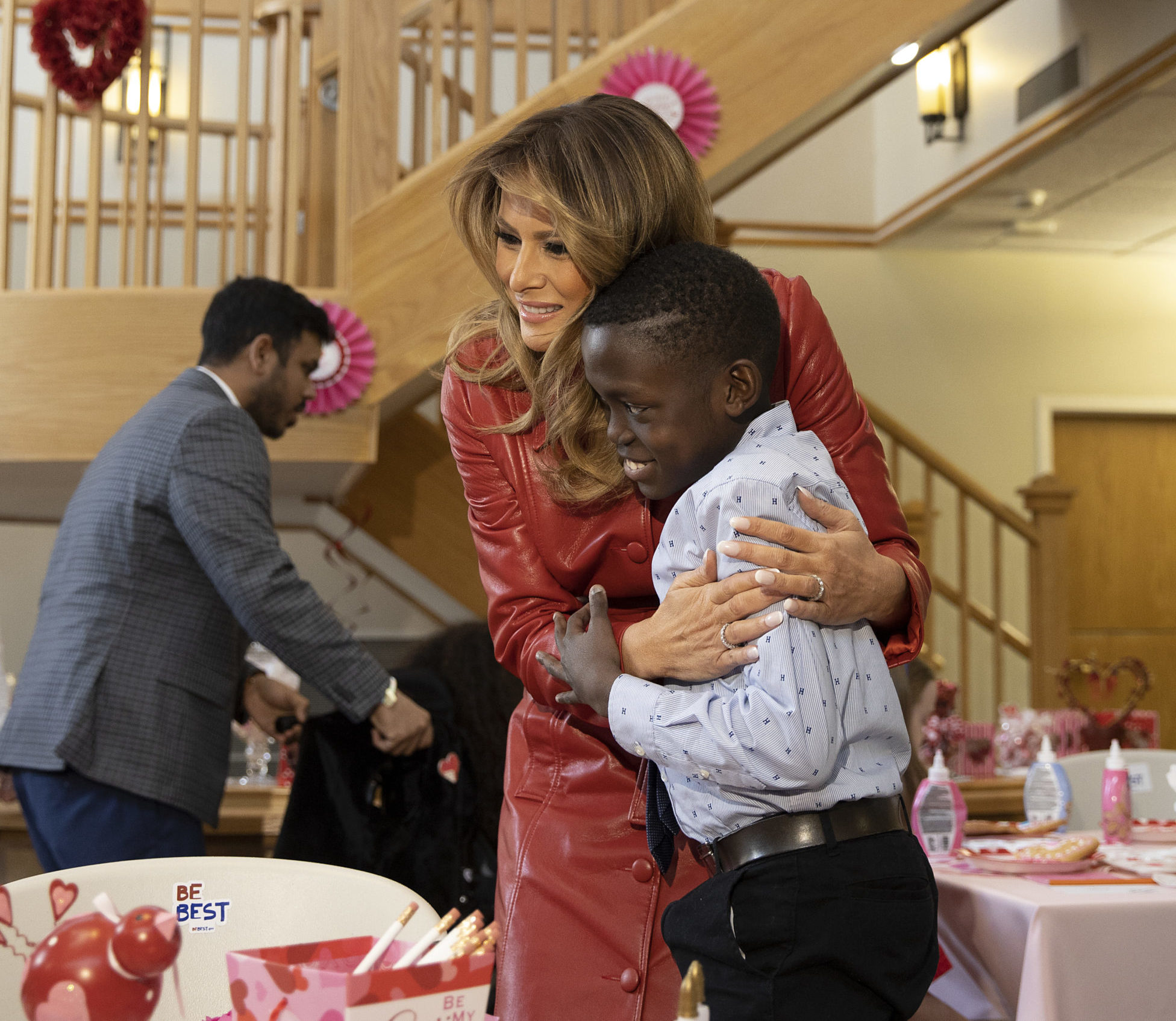 In the fall of 2019, the first lady promoted her BE BEST initiative on a trip to Teton National Park in Wyoming. She highlighted public resources that promote healthy lifestyles and help children get outdoors while connecting with American history, and distributed passes that gave children free access to any national park. She also traveled to Charleston, South Carolina with second lady Karen Pence for a visit a local elementary school to bring attention to American Red Cross’ Pillowcase Project, which helps children learn about disaster preparedness.

Earlier this year, Trump helped organize a Governors’ briefing on the coronavirus pandemic. At her request, the spouses of the governors were also represented. She noted how the virus has increased “anxiety, depression, loneliness, isolation and fear.”

“Children need the support of healthy, caring adults who can help them understand the changes in the world around them as we begin to safely reopen our country,” she said.

Trump’s attempts to promote online safety for children is the part of the BE BEST initiative that has garnered the most criticism from the media, with many citing the president’s conduct on social media. The Huffington Post went so far as to run a headline calling her the “Queen of Irony” when telling children to be kind to one another.

Psychologist and anti-bullying lecturer Joel Haber told the Washington Post “It’s difficult for her to talk about kindness” because “within her home there’s behavior that contradicts her message,” which undermines the first lady’s credibility by his account.

Trump has been forthcoming about the perceived dissonance between her message and some of the president’s statements, telling reporters in Cairo in 2018 that she “do[esn’t] always agree with what he tweets, and I tell him that. I give him my honest opinion and honest advice. And sometimes he listens and sometimes he doesn’t. But I have my own voice and my opinions and it’s very important for me that I express what I feel.”

In an October 2018 interview with ABC News, Trump acknowledged that she “will be hit with criticism to talking about cyberbullying,” while noting that it “will not stop [her] to do what is right.” 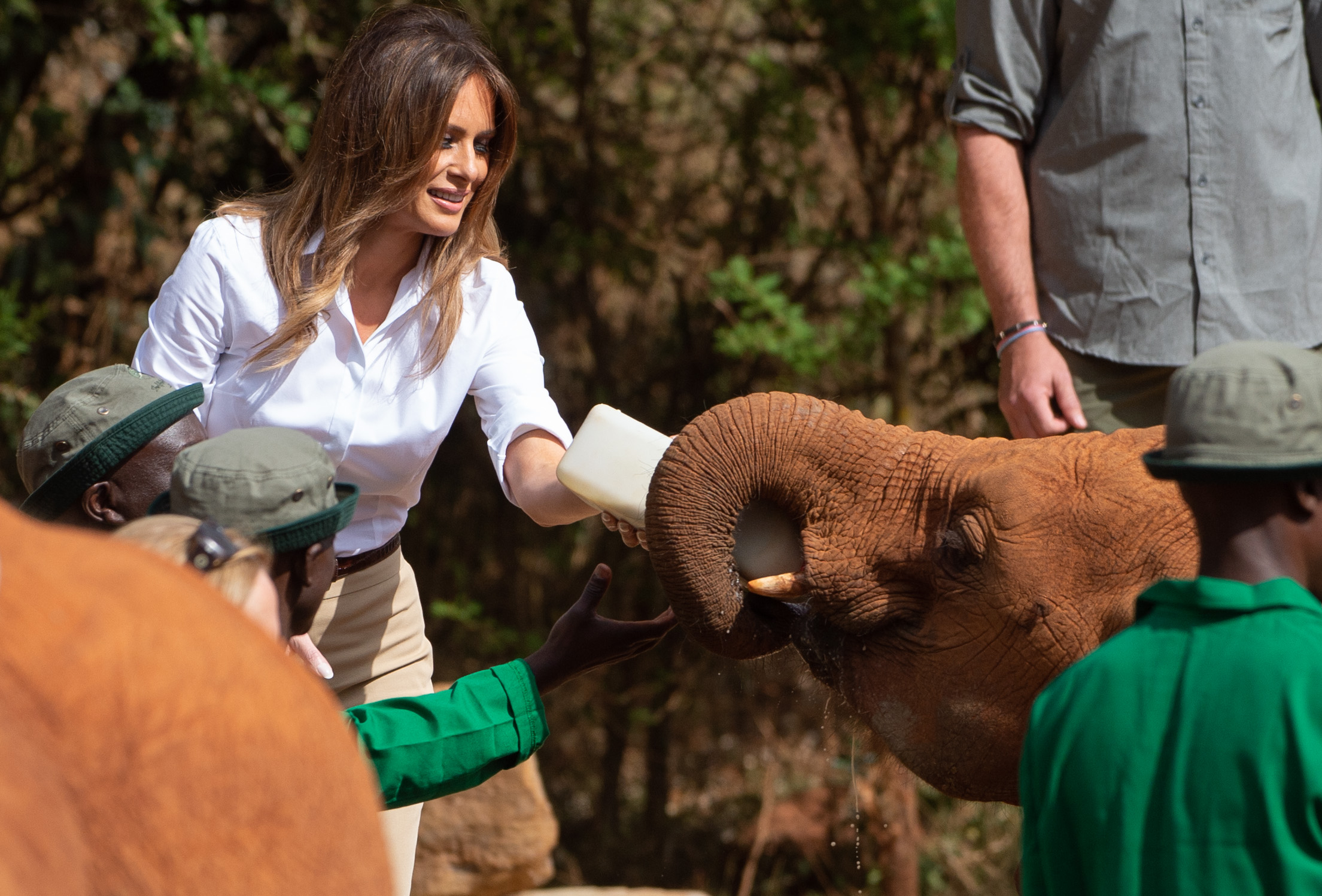 US First Lady Melania Trump feeds a baby elephant at The David Sheldrick Elephant Orphanage in Nairobi on October 5, 2018, as she pays a one day visit to the country during her solo tour of Africa promoting her children’s welfare program. (Photo by SAUL LOEB / AFP)

In October of 2018, Trump hosted a screening of the movie “Wonder,” a film about tolerance and acceptance of peers, for local sixth-graders at the White House.

The first lady has also been an active participant in the Bullying Prevention Summit on Cyberbullying and addressed more than 300 teachers and administrators at the Parent Teacher Association (PTA) legislative conference in order to draw attention to cyberbullying’s effect on the mental health of students.

Before Trump launched her BE BEST initiative, she visited Lily’s Place in 2017 accompanied by Kellyanne Conway. Lily’s Place is the nation’s first nonprofit infant recovery center focusing on helping infants harmed by the opioid epidemic and promoting healthy pregnancies.

The opioid epidemic later became a pillar of her BE BEST initiative, and her initiative has been instrumental in both raising awareness and passing legislation to confront the opioid crisis.

Trump advocated for the SUPPORT Act, which seeks to address the opioid epidemic by increasing program accessibility and treatment options for affected families while increasing oversight. However, the law has garnered criticisms from some conservative think tanks such as The Heritage Foundation for redundant provisions already covered by different federal and state laws regarding criminal sentencing on healthcare fraud.

A year after the bill’s signing into law, she met with members of Congress to highlight the legislation’s successes in providing resources to babies with neonatal abstinence syndrome like the infants she encountered at Lily’s Place in West Virginia. Since then, the first lady has gone back to West Virginia to meet with representatives from Lily’s Place to follow up on how the legislation is improving circumstances for mothers and babies. 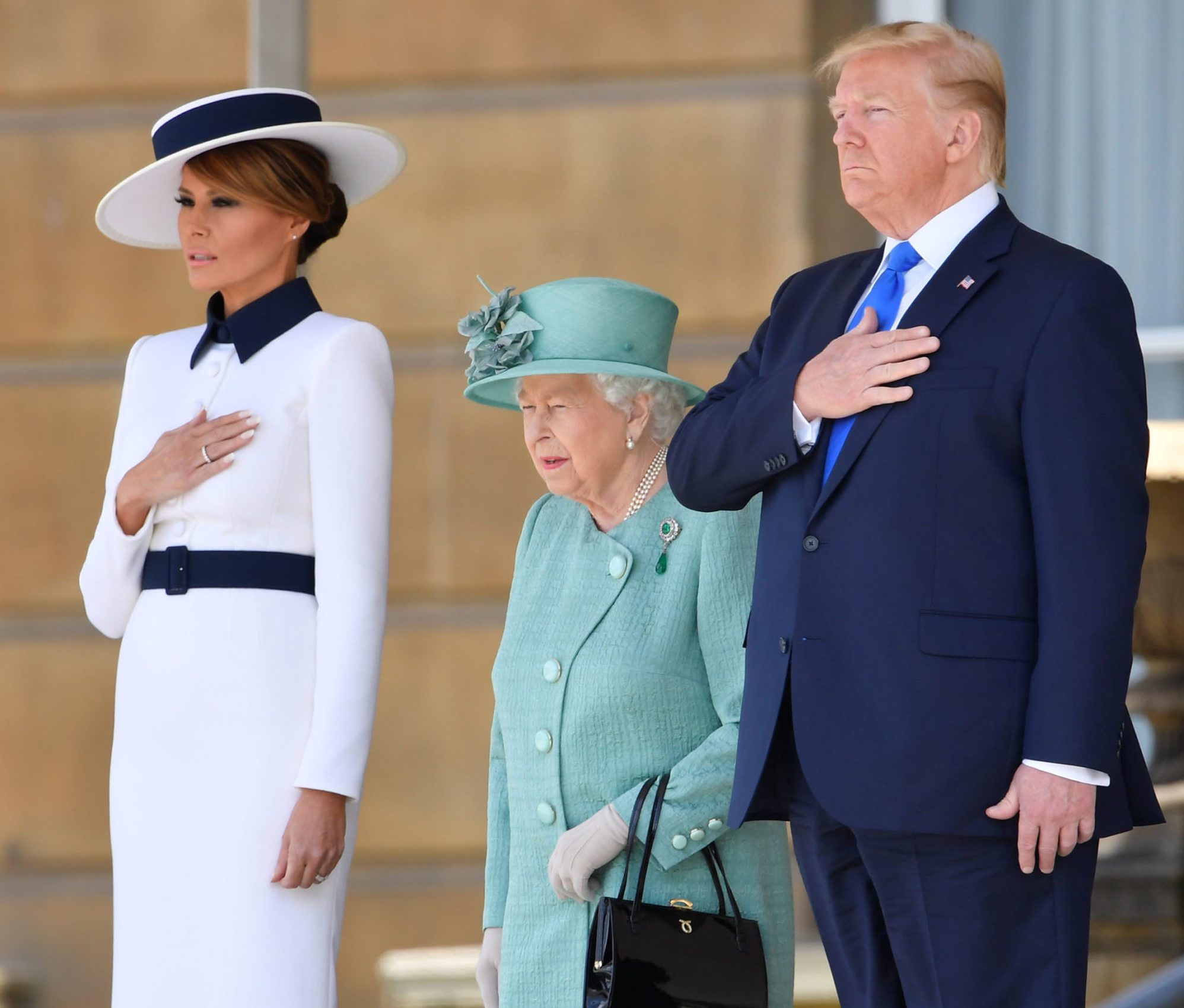 LONDON, ENGLAND – JUNE 03: Queen Elizabeth II stands with US President Donald Trump and US First Lady Melania Trump as they listen to the US national anthem during a welcome ceremony at Buckingham Palace on June 3, 2019 in London, England. (Photo by Toby Melville – WPA Pool/Getty Images)

Trump has also expanded her BE BEST initiative beyond the United States borders, meeting with children in India, the United Kingdom and Japan to promote healthy living both in-person and online.

On her first solo state trip, she visited Ghana, Kenya and Egypt, where she met with children of all ages and received briefings on how USAID was helping these countries ensure children have access to vital resources for a healthy upbringing.

Trump is the latest in a long line of first ladies that have devoted their efforts to protecting and elevating the status of children in the country, such as Michelle Obama and Nancy Reagan.