An American consulting firm that serves as a propagandist for Beijing received loans of up to $350,000 each under the coronavirus relief program, government documents show.

BLJ Worldwide received a loan of between $150,000 and $350,000 through the Paycheck Protection Program (PPP), according to analysis of the federal database that tracks payments for the coronavirus relief program.

The New York-based firm received $144,000 from the Chinese embassy and $313,200 from the China-U.S. Exchange Foundation (CUSEF) from Jan. 1 through June 30, according to a disclosure BLJ Worldwide filed with the Justice Department this week under the Foreign Agents Registration Act (FARA), which was enacted in 1938 to counter Nazi propaganda.

CUSEF has come under scrutiny in the U.S. because of its founder Tung Chee Hwa’s links to the Chinese Communist Party. He is vice chairman of the National Committee of the Chinese People’s Political Consultative Conference, a top advisory group to the Chinese government, according to CUSEF’s website.

BLJ Worldwide received its PPP loan on April 13, according to analyses of the PPP database conducted by CNN and ProPublica.

The Small Business Administration has provided loans to small businesses to pay employees and cover other expenses in order to deal with the economic setback from government-imposed shutdowns due to the pandemic.

Companies can have their loans forgiven if they meet certain requirements in the program. BLJ Worldwide obtained its loan to protect 16 jobs, according to the government database. The Daily Caller News Foundation also received a loan through the program.

Loans to businesses linked to China have come under scrutiny because of Beijing’s alleged cover up of the severity of the coronavirus pandemic in its early stages. 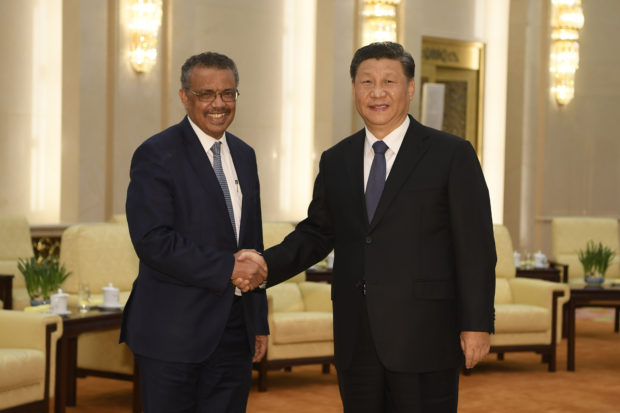 U.S. officials and health experts have accused the Chinese government of withholding data about the virus from health authorities for more than a month after it began to spread. The virus, which originated in Wuhan, China in November 2019, has caused more than 850,000 deaths across the globe.

BLJ Worldwide, which signed an agreement with the Chinese embassy in June 2017, has amplified Beijing’s spin through the embassy’s social media platforms. In a Facebook post on May 5, the embassy claimed that it has showed “transparency every step of the way” during the coronavirus pandemic.

“#China has shared information on the disease with the international community timely and worked with other countries in the fight against the #coronavirus,” the post reads.

BLJ disclosed in previous filings with the Justice Department that it maintains the Chinese embassy’s Facebook account.

On Jan. 23, the embassy account touted its cooperation with the World Health Organization in the coronavirus response. Just nine days earlier, WHO cited false assurances from the Chinese government that coronavirus was not spreading through human-to-human transmission. (RELATED: WHO Tells Everyone Don’t Worry Because China Says Coronavirus Isn’t Contagious)

The embassy account has also been highly critical of demonstrators in Hong Kong, who took to the streets beginning last year to protest a fugitive law proposed by Beijing.

On Nov. 14, 2019, the embassy account accused demonstrators in Hong Kong of “ruining their homeland.”

“Their actions are on the brink of terrorism,” the post reads.

In a post on Nov. 19, 2019, the embassy called the Hong Kong demonstrations “a revolution started by a bunch of hot heads who do not understand the cost, pain and goal of a revolution.”

BLJ Worldwide has provided other consulting services to the embassy, the FARA filing says.

The firm has drafted and placed op-eds written on behalf of Chinese diplomats, and arranged meetings with “key influencers, politicians, leaders in academia and business leaders,” according to the filing.

The firm conducted four media training sessions in coordination with the embassy, including a “large lecture on diplomatic skills” and “a special media training for senior diplomats.”

“BLJ has also helped the Embassy to re-craft its core policy points into talking points, and has helped to edit speeches for Embassy hosted events, or events in which the Embassy has participated,” the FARA filing says.

For CUSEF, the Hong Kong-based nonprofit, BLJ has “engage[d] openly with academic and thought leaders, including through the use of salon style dinners.”

BLJ has also supported CUSEF-sponsored trips to China for journalists at Vox, Slate, the Boston Herald, the Boston Globe, and The Huffington Post, according to the FARA filing.

It is unclear from the filing when those trips occurred. A journalist writing for Vox disclosed taking a CUSEF-sponsored trip to Beijing in a June 13, 2018 article for the website. A Slate article published on July 30, 2018 discloses that the author visited China on a trip sponsored by CUSEF.

In a FARA filing on Tuesday, Rogich Communications said it represents the Chinese embassy, the People’s Republic of China and Cui Tiankai, the Chinese ambassador to the United States.

The firm said in the filing it did not provide any services for its clients this year or received any payment.

Neither BLJ Worldwide nor Rogich Communications responded to requests for comment for this story.