Grazing off hi-cap Para magazines, the 9mm Rock Island TAC series keeps plenty on tap for anything that goes bump in the night.

Why The Rock Island TAC Series Is An Ideal Home-Defense Pistol:

One of the “evergreen” tactical problems that some obsess over is how and when to do a proper reload. Entire book chapters have been devoted to this subject, as well as countless magazine articles.

After all, it would be most embarrassing to be standing at the pearly gates, trying to explain to Saint Peter, “Well, I would have done all right if I’d just had another round or two to use.” The mockery you’d receive from those behind you in line who “knew” they would have done better might be unbearable. (Do they issue halos with an asterisk in heaven?)

Here’s a solution: Have enough ammo in your pistol so that you don’t need to reload. Instead of six, seven or 10 rounds, how about 17 rounds—or even more—and in a pistol that holds a light, has enough heft so that recoil isn’t a problem and that will work and work and work? In other words, how about a steel, high-capacity 9mm 1911 – as in the Rock Island TAC series?

So, take a competition-bred hi-cap 9mm, make it tactical-adapted and have it on your nightstand ready to go. Does that sound like a deal? (Cost? We’ll get to that.) 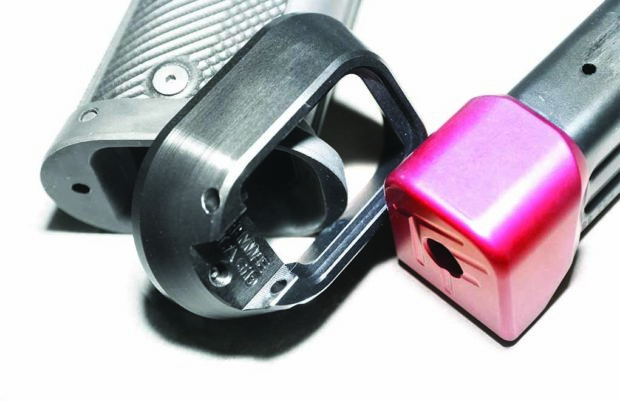 You can start with the flush magazine for 17+1 rounds. Additionally, you can use, or add, an extended baseplate to gain a couple more rounds. This is a good start.

The Rock Island TAC series on the hi-cap frames are built around the design of the Para Ordnance magazines and frame size (“built around?”—we’ll get into that). The Para is no more, but the established market of pistols means that magazines are readily available (assuming you live in a state that allows them), and they’ve been competition tested (that’s another thing we’ll discuss).

It was fashionable awhile ago to pooh-pooh competition guns as “range queens,” “maintenance hogs” or fussy, match-only guns that choked at the first sign of trouble. Well, that might have been the case when Ronald Reagan was in office, but it hasn’t been the case for decades. The guns you see on ranges these days are the most tested, proven and reliable guns to be had, because there’s a lot of loot, glory and status to be gained with reliability (not to mention personal safety), and those lessons have come down to production guns.

So, the Rock Island pistols are reliable and accurate.

The Rock Island TAC series use the hi-cap Para magazines, holding 17 rounds of 9mm per. If you want more (and who doesn’t?), you simply ring up or click on Taylor Freelance, and Robin and the crew will send you some magazine extensions. These will add four rounds to the count (a few magazines might add only three. That’s one of those quirks of the business beyond the control of anyone involved). That means you’ll be starting the “Bump-in-the-Night Olympics” with 22 rounds in the gun. When you do order extensions, be sure and specify in this case that you have a Rock Island pistol.

And a reload gets you 21 more, should you be that deep in trouble.

A full-sized 9mm TAC (you can have a commander-sized one if you want) will tip the scales at 3 pounds. That’s 48 ounces. And, if you find the recoil of 9mm ammo from a 48-ounce pistol is too much, you need to re-think your options. Because it’s all steel, the TAC is going to shrug off 9mm+P loads, and the recoil will still be mild.

The frame has a dust cover with a full-length accessory rail, so there’s almost no option you can’t mount there. Any light that’s made-to-fit-a-Picatinny” rail will fit.

There’s a lightweight trigger and, because this is a 1911, the trigger pull will be a lot easier to handle than on a basic plastic striker-fired 9mm. On the back end is an ambidextrous thumb safety, along with a generous grip safety and beavertail tang, so you’ll have a solid grip, recoil control and ease of shooting.

Below all that is a set of aggressively textured G10 grips that are designed to keep your hands tightly in control of the pistol and recoil.

At the bottom of the frame there’s an accessory that comes to you courtesy of the competition lessons learned: a magazine funnel. Yes, a tapered-top, hi-cap magazine is easy to reload, but a funnel makes it even easier. And, if your hands are the right size, the lip of the funnel acts to lock your grip in place even tighter. If you want a bigger funnel, you can have one, but the competition-sized funnels can get to humongous proportions. And, here’s a plus: The bigger funnel acts even more to give your hand a bottom ledge to lock into and keep your grip secure.

The slide has cocking serrations front and rear, which some shooters object to. They’ll often call the front serrations “holster shredders.” However, this pistol is meant for home defense, so it won’t be seeing a lot of holster use. And even if it does, the price of a shredded holster (which takes a lot of work to achieve) is a small price to pay for all these features.

The ejection port is lowered and sculpted at the rear, and there’s no way 9mm brass is going to fail to exit the scene after it’s been used to fire a round. The sights are also competition tested and proven. The fiber-optic front presents you with a red-dot in the blade—a dot that’s illuminated by ambient light. The rear sight is a low-profile, but adjustable, sight dovetailed into the slide, and it has paired white dots, one on each side of the notch. This is about as fast a setup as you’ll get (short of installing a red-dot optic). 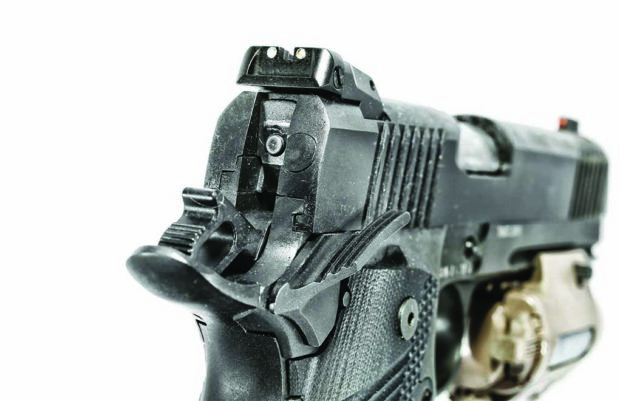 The two white dots on the rear sight work well with the red fiber-optic front blade.

Inside, the barrel has an integral feed ramp, so the cases are fully supported, offering even more support to +P ammunition. The 5-inch barrel is going to wring out just about all the velocity any 9mm load can produce … and, these days, some of them can really generate some energy. Keep in mind, however, that hi-cap 1911s are not all sunshine and roses—they can be a handful.

The mainspring housing is flat and checkered—flat to let you get a grip and checkered to make that grip non-slip. The front strap is smooth, except for a small set of grooves, top to bottom, along the centerline. Rock Island frames are made of ordnance steel—4140 alloy—that’s given a durable, parkerized finish.

Fully checkering the frame would be expensive, so if you really feel you need a surface that’s even more non-slip than the grooves provide, do what the competition shooters do: Put a strip or swathe of skateboard tape on the front strap (for the tightest bond, degrease the front strap first).

What about a light?

There’s no lack of tactical lights for pistols; and here, you’ll have to make a decision based on your situation: What’s the farthest distance you’ll need to light up? How wide an area? What’s the background? The first time I took a super-lumen tactical light to search inside a house that was for sale, the reflection off the newly painted Navaho white walls almost blinded me. So, consider where you’ll be using the light, your needs and what options you have. In this instance for sure, there’s no such thing as “one size fits all.”

Similarly, you’ll want to tailor your bullet penetration to the task at hand. No one else to worry about? Use FBI-compliant ammo for penetration. Family members in adjacent rooms? You might want to consider loads that are less penetrating. As always, pick tools for the task … such as the Rock Island hi-cap 9mm. 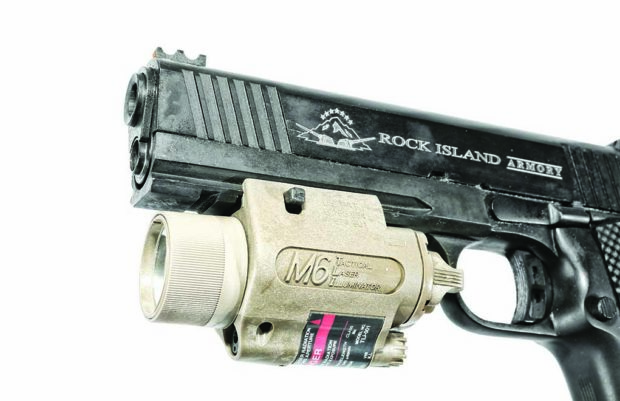 An accessory rail is a great place to put a light, because when you pick up the pistol, you also have a light at your disposal. No two-handed juggling will be involved.

Testing the Rock Island TAC 9mm wasn’t any kind of an ordeal: It was a pleasant day at the range for me to generate chrono data, accuracy results and do a bunch of falling-plate drills.

Keeping In Mind – The Last Detail Is Price

Competition guns can be expensive. However, the TAC 9mm is a defensive gun with competition tuning. Its MSRP is just over $900.

Sure, you can get a plastic, striker-fired pistol for less than that, but you lose the nice trigger and the extra recoil-killing weight. Magazines are still readily available (I don’ foresee a time when you won’t be able to source a Para or Para-derived magazine), and they generally cost between $30 and $40 per. For instance, a Taylor Freelance magazine basepad that adds rounds will run you $35.

The Rock Island Armory TAC uses what the industry calls the “short-frame” magazine dimension. Consequently, you’ll want RIA-specific magazine extensions; and, if you order from a company other than Rock Island (but why would you?), make sure to buy magazines that are full length. 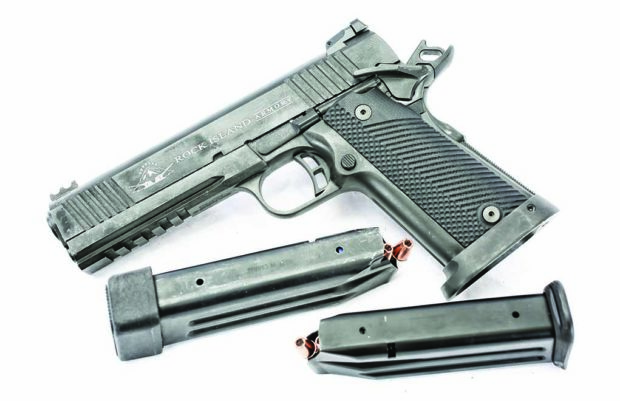 I have a drawer full of Para and Para-derived magazines, so when it came time to set up the Rock Island TAC, it was easy to simply haul the drawer to the range, check what fit and then range-test them in order to build a set comprising the TAC 9mm pistol, a main magazine and one or two spares. You probably don’t have a drawer like that, so buy Rock Island Armory mags—or be absolutely clear when ordering from another vendor.

With a bit of diligence, you’ll have an ensemble that has 64 rounds of 9mm at your beck and call. And, just to be clear: My Rock Island TAC looks a bit different, because I’ve had it here, at “Gun Abuse Central,” for a few years now. Rock Island changed the markings, but the pistol you’ll find today is the same solidly built hi-cap.

So, there you have it: enough ammo so that a reload is now a very, very small likelihood. But, if you do, there’s plenty more in the next one or two. This, in a soft-recoiling, accurate pistol with a light attached, all ready to go on the nightstand (and locked in the safe when you go to work each day) for security where you live. All this for not a lot of money. Is this still a great country, or what?

This article originally appeared in the 2020 Concealed Carry issue of Gun Digest the Magazine.