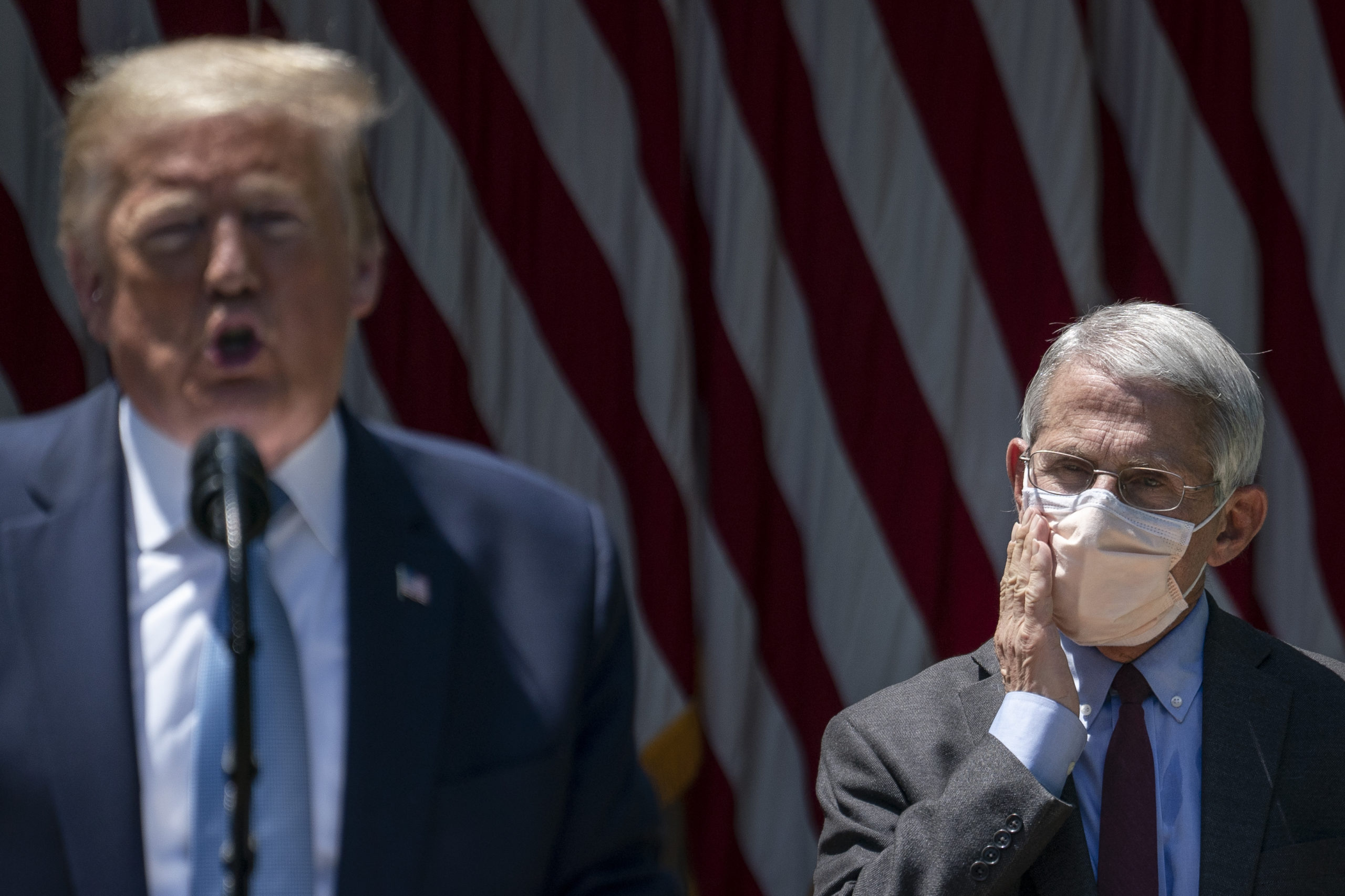 WASHINGTON, DC – MAY 15: Dr. Anthony Fauci (R), director of the National Institute of Allergy and Infectious Diseases, looks on as U.S. President Donald Trump delivers remarks about coronavirus vaccine development in the Rose Garden of the White House on May 15, 2020 in Washington, DC. Dubbed “Operation Warp Speed,” the Trump administration is announcing plans for an all-out effort to produce and distribute a coronavirus vaccine by the end of 2020. (Photo by Drew Angerer/Getty Images)

“Ooooh,” Trump responded. “Don’t tell anybody, but let me wait until a little bit after the election. I appreciate the advice.”

“He’s a nice man though, but he’s been wrong on a lot,” the president added. “Do not under any circumstances wear a mask, he said. Do not close up to China, he said, then he said later on that Trump — President Trump saved tens of thousands of lives because I closed early.”

Crowd chants “Fire Fauci” during Pres. Trump’s campaign rally in South Florida: “Don’t tell anybody, but let me wait until a little a bit after the election,” the president says in response. “I appreciate the advice.” https://t.co/rlgU1dKT2A pic.twitter.com/Mqa2RwbP3i

CNN reported earlier this summer — as tension between Trump and Fauci escalated — that under federal law, Trump cannot directly fire Fauci from his post as the director of the National Institutes of Health’s National Institute of Allergy and Infectious Diseases. He can, however, pressure Health and Human Services Director Alex Azar to remove him from the position, a process that would allow Fauci to appeal and would likely take months to complete.

Fauci predicted in an interview published Saturday by The Washington Post that coronavirus cases in the United States would surge over the winter.

“We’re in for a whole lot of hurt. It’s not a good situation,” Fauci stated. “All the stars are aligned in the wrong place as you go into the fall and winter season, with people congregating at home indoors. You could not possibly be positioned more poorly.”

The White House did not respond to inquiries on the president’s comments by press time, but deputy press secretary Judd Deere attacked Fauci’s comments in a Sunday statement.

“As a member of the Task Force, Dr. Fauci has a duty to express concerns or push for a change in strategy, but he’s not done that, instead choosing to criticize the president in the media and make his political leanings known by praising the president’s opponent — exactly what the American people have come to expect from The Swamp,” he stated, further claiming that Fauci “has no confidence in the American people to make the best choice for themselves armed with CDC best practices.”