Biden and Harris delivered speeches before blaring car horns at a socially-distanced victory rally in Biden’s hometown of Wilmington, Delaware. Biden declared victory hours after Fox News, the Associated Press and numerous other outlets called the race in his favor earlier Saturday. Trump, however, has declared that the election is “far from over,” pointing to states like Georgia headed toward likely automatic recounts and his campaign’s various legal challenges to vote counts across the country.

Biden: “I pledge to be a president who seeks not to divide, but unify. Who doesn’t see red states and blue states, only sees the United States. I work with all my heart with the confidence of the whole people to win the confidence of all of you.” pic.twitter.com/qmVAxtWfYq

Biden vowed to “get COVID under control,” as well as address climate change and racial tensions. He said he would name a group of experts on Monday to create a plan to address the ongoing pandemic.

Biden also quoted a hymn that he said was special to his now deceased son, Beau Biden.

“And he will raise you up on eagle’s wings and bear you up on the breath of dawn and make you shine like the sun and hold you in the palm of his hand. And now together, on eagle’s wings we embark on the work that God and history have called upon us to do, with full hearts and steady hands,” Biden said. 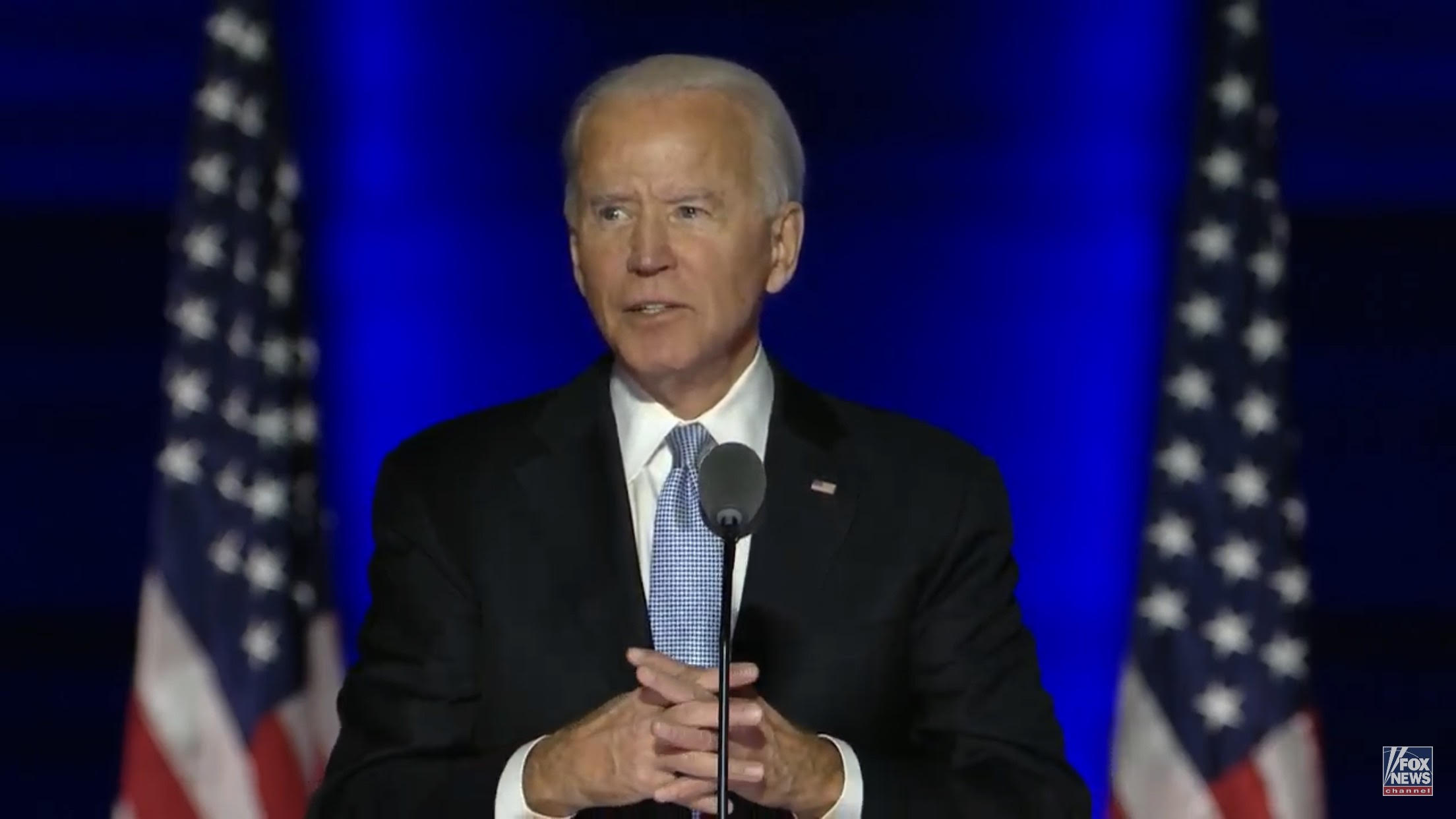 Biden’s election campaign has centered on a message of reuniting America after four years of polarization under the Trump administration. He said Saturday evening that while he is a proud Democrat, he will be a “president for all Americans.”

America, I’m honored that you have chosen me to lead our great country.

The work ahead of us will be hard, but I promise you this: I will be a President for all Americans — whether you voted for me or not.

I will keep the faith that you have placed in me. pic.twitter.com/moA9qhmjn8 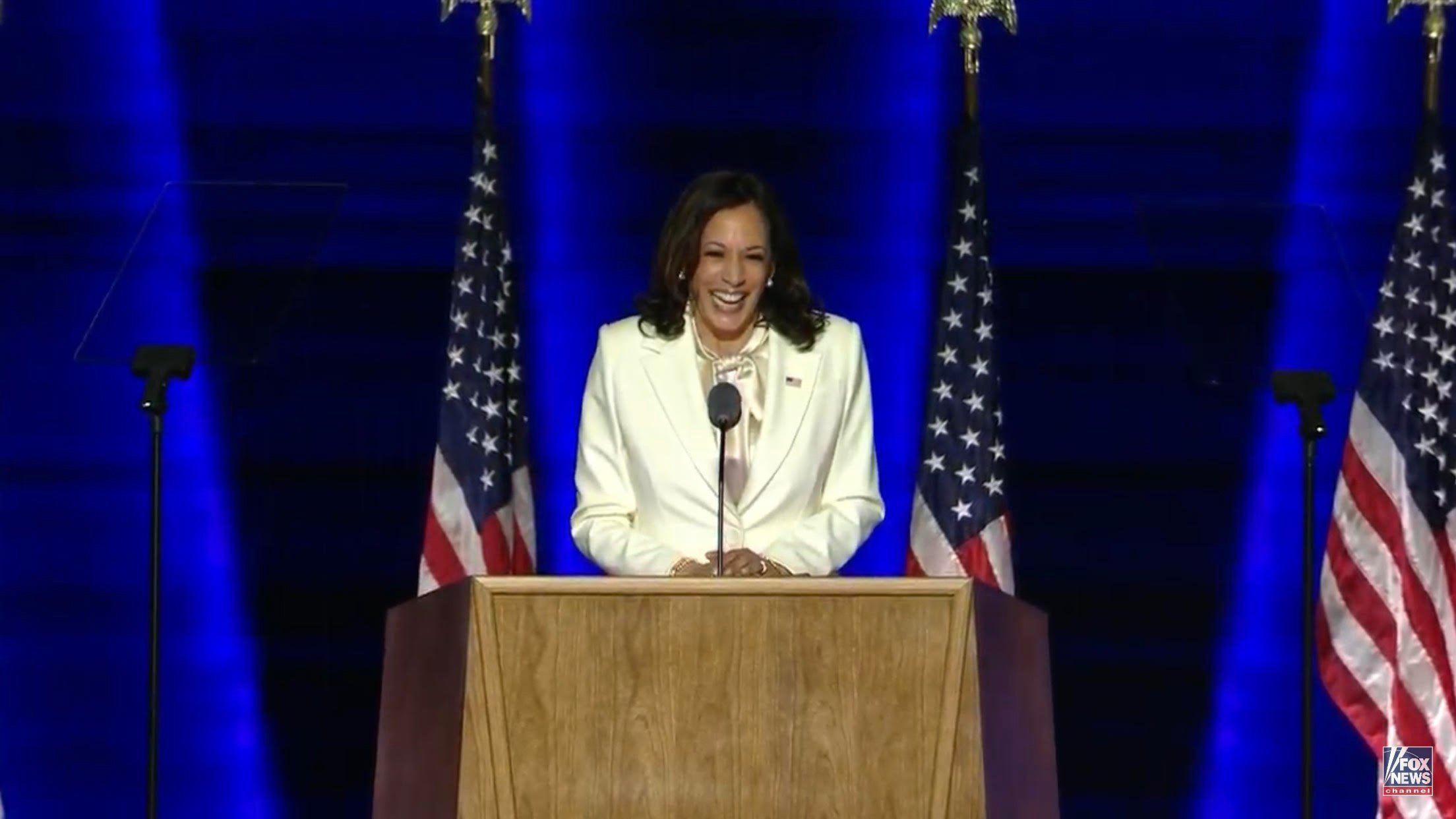 Harris’ speech highlighted her status as the first black and female vice president and reiterated the Democratic Party’s devotion to racial diversity.

“For four years, you marched an organized for equality and justice, for our lives, for our planet, and then you voted,” Harris said. “You delivered a clear message. You chose hope and unity, decency, science, and yes: truth.”

.@KamalaHarris: “To the American people, no matter who you voted for, I will strive to be a vice president like Joe was to President Obama.

Loyal, honest, and prepared. Waking up every day thinking of you and your family.” pic.twitter.com/SGUpmDP5iz

Trump has not made an official statement regarding the election since his initial denial of Biden and Harris’ win Saturday morning.

“The simple fact is this election is far from over,” Trump’s statement read. “Joe Biden has not been certified as the winner of any states, let alone any of the highly contested states headed for mandatory recounts, or states where our campaign has valid and legitimate legal challenges that could determine the ultimate victor.” (RELATED: Boris Johnson, Other World Leaders Congratulate Joe Biden And Kamala Harris On Winning Election)

“This is the only way to ensure the public has full confidence in our election. It remains shocking that the Biden campaign refuses to agree with this basic principle and wants ballots counted even if they are fraudulent, manufactured, or cast by ineligible or deceased voters,” the statement continued.

Trump and his campaign allege that GOP poll watchers were denied entry to vote counting areas and that when they were allowed in, they were forced to stand so far away from the actual counting that they could not provide any “meaningful” observation. The campaign has sued to allow poll watchers to stand closer to vote counters and to force the recounting of any votes counted without proper observation.

Trump’s Saturday statement presented a somewhat different tone from his previous statements on the integrity of the election. In the days since November 3, Trump has routinely made vague and unsubstantiated accusations of widespread fraud at the polls. This statement forgoes those direct accusations and points only to the ongoing lawsuits and imminent recounts.