A promising immunotherapy drug for patients battling non-Hodgkin’s lymphoma may fail to gain federal approval due to COVID-19 precautions, according to company executives and a quarterly report.

Liso-cel, manufactured by Bristol-Myers Squibb, originally had its Food and Drug Administration (FDA) application accepted in February, but has yet to have one of its contracted manufacturing sites undergo FDA inspection due to the coronavirus pandemic. Not only is the drug’s approval contingent on the facility inspections from the FDA, according to multiple company executives, but its application expires on Nov. 16, meaning that if the plant is not inspected in the coming days Bristol-Myers may have to completely resubmit the drug’s application as a result.

While the first of two facility inspections occurred, the planned inspection of Bristol-Myers’ contracted Houston facility has not “due to COVID travel restrictions and health risks,” according to a Sept. 8 conference call with Citi biopharma analysts and the company’s chief medical officer.

The coronavirus pandemic has posed challenges for both “us and the FDA,” and “it does pose a risk [for liso-cel’s approval] because the FDA staff, like many of us, are operating under the constraints of COVID,” Samit Hirawat, Bristol-Myers’s chief medical officer said during the call.

“What I can say today is the FDA has informed us that they will require inspection of both our contracted facilities in Washington State as well as the manufacturing organization for the vector, which is located in Texas. These inspections have not yet taken place. We are working very closely with the FDA to keep this application on track,” he added.

“We do not plan to provide additional details or ongoing updates on the FDA’s process,” the administration said when asked by the Daily Caller News Foundation if liso-cel was at risk of failing to get approval.

The drug, which in clinical trials triggered a positive response in 73% of patients and remission in 53% of patients, according to Bristol-Myers, must receive FDA approval by Nov. 16. If it fails to be approved, it must resubmit its application, further delaying its approval by months, if not years, potentially costing thousands of lives as a result.

Each year, approximately 77,000 Americans are diagnosed with non-Hodgkin’s lymphoma, and about 20,000 Americans die, according to the American Cancer Society. (RELATED: Trump’s Latest EO Aims To Reduce Health Care Costs, But Some Fear It May Do The Opposite)

Hirawat also said on the Sept. 8 call that while he understood the FDA’s need to prioritize the development and approval of coronavirus treatments and vaccines, he said that “they also need to manage” other “diseases that are life-threatening” as well.

When pressed on whether the delay could potentially torpedo the drug’s approval, Hirawat added that he could not further elaborate except that its approval “is [a] very, very high [priority] for us.”

On Sept. 15, Bristol-Myers CEO Giovanni Caforio said on a conference that while the approval process was “going well,” the FDA’s inability to inspect the Texas site due to COVID was “a main concern” that “somewhat increases the risk” that the drug would fail to receive approval before its deadline. 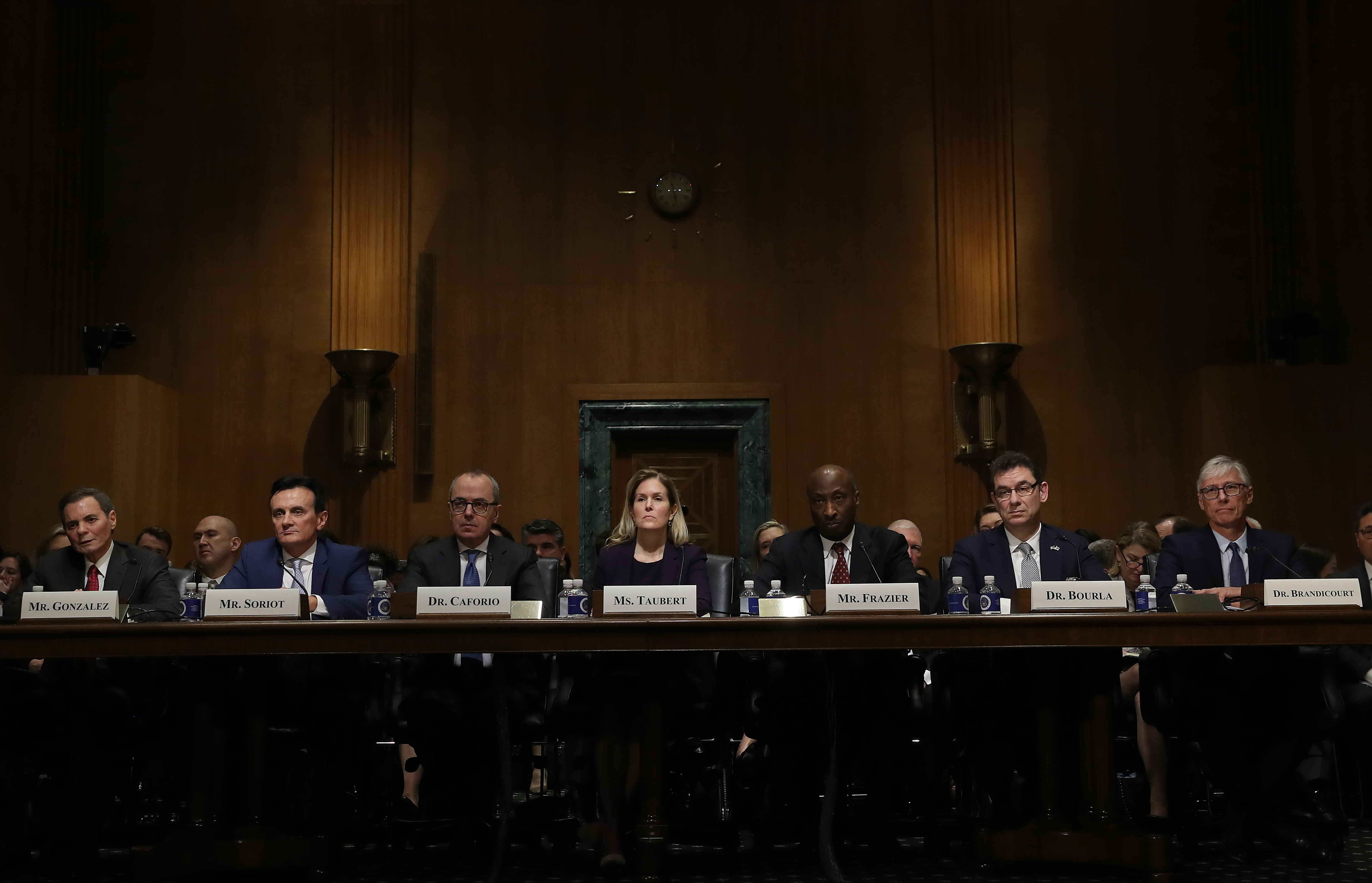 Chief Executive Officers of pharmaceutical companies testify before the Senate Finance Committee on “Drug Pricing in America: A Prescription for Change, Part II” February 26, 2019 in Washington, DC. Giovanni Caforio, chairman of the board and CEO of Bristol-Myers Squibb Co, appears third from left. (Win McNamee/Getty Images)

To receive approval, the drug needed FDA inspection at both of its contracted manufacturing plants. While the first inspection occurred months ago in Washington State, the second has not even been scheduled even though the two inspections are independent from one another, according to the company conference call.

In Bristol-Myers’ third-quarter financial report, it acknowledged that COVID-19 could delay the “ability for the FDA to conduct on-site inspections, such that the review of [liso-cel] could be delayed” as well.

During another event at the end of September, Hirawat conceded that an inspection had not even been scheduled, saying that “right now we don’t have a date for inspection of the plant. So they have not been inspected yet.”

Bristol-Myers did not say whether the drug was in jeopardy. “Bringing liso-cel to patients in need is a top priority for Bristol Myers Squibb,” a company spokesperson told the DCNF in an email.

“The FDA has not yet inspected [Bristol-Myers’] contracted manufacturing facility in Texas. [Bristol-Myers’] is committed to working with the FDA to ensure a safe and timely inspection of that facility, despite the challenges posed by the COVID-19 pandemic,” the spokesperson added.