After the owners of one of Russia’s largest private banks announced in 2016 that they would give away all of their wealth, a top official at the Atlantic Council saw a chance to fill the Washington-based think tank’s coffers.

“This could open an opportunity,” Anders Aslund, a Swedish economist, wrote in an email on May 20, 2016, to his colleagues at the Atlantic Council, one of the Beltway’s most prominent foreign policy think tanks.

Mikhail Fridman and Peter Aven, the billionaire co-owners of Alfa Bank, had just announced they would both give away their wealth to charity, Aslund wrote, citing a Russian news report.

“To date Fridman has been extremely stingy,” Aslund said, noting that Atlantic Council executives had hosted the banker in Washington, D.C. months earlier “and got nothing.”

“I shall tentatively have dinner with Aven in Moscow Sunday night so I might be able to ask him what he wants,” Aslund wrote in the email, which was revealed in a lawsuit that Fridman, Aven and a third Alfa Bank owner filed over the infamous Steele dossier.

Other Atlantic Council officials wrote of forming a relationship with the bankers, according to emails from the lawsuit.

In one, Atlantic Council CEO Fred Kempe wrote of a potential partnership between the think tank and Letter One, an affiliate of Alfa Bank.

“I’m also copying Rick Burt, who is helping us think about our relationship with Letter One, but perhaps there’s also a larger role for you personally to play at the Atlantic Council,” Kempe said in a letter to Aven on July 27, 2015.

Burt, a former U.S. ambassador to Germany, is a director at the Atlantic Council and adviser to the Alfa Bank owners.

The Atlantic Council’s fundraising attempts were unsuccessful, a spokesman for the think tank told the Daily Caller News Foundation. But the emails provide a rare glimpse into the fundraising tactics of one of the think tank world’s most respected institutions.

The Atlantic Council, the Brookings Institution, the Center for Strategic and International Studies and other prominent think tanks have come under intense scrutiny in recent years over their relationships with foreign governments, as well as domestic and foreign corporations. (RELATED: Atlantic Council Partnered With Burisma Despite ‘Uneasiness’ Over Bribery Allegations)

The State Department issued a notice in October calling on think tanks and other research institutions to disclose any funding they receive from foreign governments or government-linked companies. The New York Times has published a series of reports detailing the increasingly cozy relationship between think tanks and their government and corporate clients.

The relationships have stoked concerns that donors have been able to shape their beneficiaries’ analyses and that the think tanks are used as points of access for donors to the policy makers, diplomats and journalists who frequently attend think tank events.

Few if any think tanks register their activities under federal lobbying laws, allowing their benefactors to avoid the stigma attached to traditional lobbying relationships.

The Atlantic Council boasts a deep roster of former diplomats, military officers and other government officials on its board and as directors of its research programs.

H.R. McMaster, a former national security adviser to President Donald Trump, is a board member, as is Michael Hayden, the former director of the CIA and National Security Agency.

The Alfa Bank emails included Atlantic Council officials Richard Morningstar, John Herbst, Daniel Fried and Burt, all of whom have been U.S. ambassadors to European or Eurasian countries.

The Atlantic Council has faced perhaps the most scrutiny of the major think tanks over its donor relationships.

Its affiliation with the government of Turkey has drawn outcry because of Turkish President Recep Tayyip Erdogan’s increasingly authoritarian grip on his country.

Atlantic Council officials, including Kempe, met with Erdogan just after his bodyguards attacked a group of peaceful protesters in Washington, D.C. on May 16, 2017. 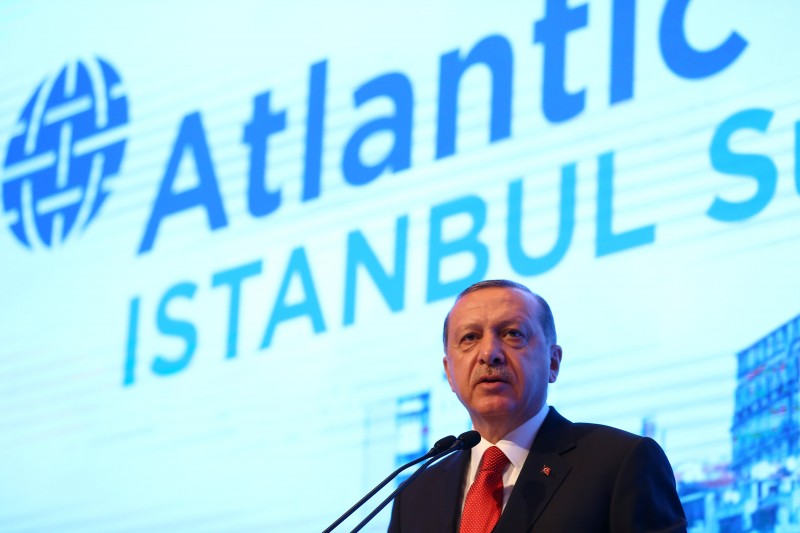 Atlantic Council has also partnered with Burisma Holdings, the Ukrainian energy firm that tapped Hunter Biden as a director in 2014.

Herbst, a former ambassador to Ukraine who serves as director of Atlantic Council’s Eurasia Center, was the think tank’s chief liaison to Burisma.

State Department emails show that Herbst contacted U.S. diplomats in late 2016 regarding the Atlantic Council’s possible partnership with Burisma. George Kent, an assistant secretary of state, pushed back on the idea, according to the emails, citing ongoing bribery and money laundering investigations into Burisma’s owner.

That did not deter Herbst or the Atlantic Council, which entered a cooperative with Burisma in January 2017, the company announced at the time. Herbst informed Kent about the arrangement through an email and noted that there was still “some uneasiness” about the partnership because of bribery allegations against Burisma.

Burisma had also hired a consulting firm owned by Sally Painter, an Atlantic Council director, to lobby U.S. government officials as part of a campaign to burnish the company’s reputation in the U.S., Painter told Senate investigators during a deposition on Aug. 31. Painter told the investigators that Devon Archer, a business partner of Hunter Biden’s who also served on Burisma’s board, approached her about working for the company.

According to BuzzFeed, one of the Latvian banks, ABLV, was seeking approval to establish a branch in the U.S. The effort failed after the U.S. Treasury Department identified ABLV as a “primary money laundering concern.”

Aslund’s emails regarding Alfa Bank’s owners were revealed in court filings in a lawsuit that they filed against Fusion GPS regarding its role disseminating an anti-Trump dossier authored by former British spy Christopher Steele in 2016.

Steele alleged in the dossier, which was funded by the Democratic National Committee and the Clinton campaign, that the Trump campaign conspired with the Kremlin to influence the 2016 election.

One of the 17 memos, dated Sept. 14, 2016, alleged that Aven and Fridman — the Alfa Bank owners — had bribed Russian President Vladimir Putin.

Fusion GPS and Steele also investigated the now-debunked claim that Alfa Bank had a covert communications channel with the Trump Organization in 2016.

Steele testified in a lawsuit that Michael Sussmann, a partner for Perkins Coie, the firm that represented the Clinton campaign and the DNC, told him in July 2016 of the alleged connection between Alfa Bank and Trump. Steele said Glenn Simpson, the owner of Fusion GPS, directed him to dig up dirt on the bankers as part of his investigation into the Trump campaign.

A British judge ruled against Steele in July in the lawsuit filed by the bankers, saying that the allegations in the dossier were “inaccurate” and “misleading.”

Lawyers for Fusion GPS cited the Aslund emails in their request to depose Burt, the Alfa Bank adviser and Atlantic Council director.

“Having managed their relationships and appearances in Washington, Amb. Burt can testify about keeping up a Russian oligarch’s appearances with Western investors and government officials in Washington,” Fusion GPS’s lawyers wrote in a court filing on Nov. 6.

The meeting in May 2018 generated controversy at the time after critics of the Russian government alleged that Fridman and Aven had close ties to the Kremlin.

Aslund and Herbst defended the dinner, suggesting that they maintained relations with the bankers in order to gain insight into Russia’s economy and politics.

They did not disclose that the Atlantic Council had courted Aven and Fridman as potential donors to the think tank.

“They come here fairly often. They just want to know what’s happening in D.C., and this is natural,” Aslund told Voice of America’s Russian service in an article published May 23, 2018.

“We talked about Russian economy and how it is affected by the sanctions,” added Aslund, who declined to provide additional details of the meeting because it was off the record.

Herbst issued a rebuttal to the critics, saying that a meeting with Aven and Fridman were “well-connected people” who could “provide a wealth of insight” into Russia’s economy and government.

“This does not mean we are giving them a sweetheart platform. Our private meetings are known for their candor, possible because they are private,” Herbst said.

He characterized the meetings in 2015 and 2016 as “informal exchanges … about a possible funding partnership.”

“Those discussions never advanced to a formal stage of consideration, and Dr. Aslund did not offer anything in return for Alfa Bank’s support,” Kisling said. “Neither Ambassador Herbst nor Dr. Aslund made any request for funding from Alfa Bank around the 2018 meeting.”

Aslund’s wooing of Alfa Bank presents an inconsistency in his response to the Steele dossier.

He has touted the allegations in the dossier regarding collusion between the Trump campaign and Russia, while ignoring Steele’s uncorroborated allegations about the Alfa Bank owners.

Aslund praised the dossier as “outstanding intelligence” and said that “most of” Steele’s information had been proved true. He wrote an essay for the Atlantic Council in February 2018 touting the dossier. The think tank has since retracted the essay and removed it from its website, according to Newsweek.

Aslund also praised Igor Danchenko, the analyst who served as Steele’s primary source. Aslund wrote in a tweet on Oct. 21 that Danchenko was an “excellent” graduate student of his at Georgetown University. Danchenko was identified as Steele’s source in July and gave interviews to several news outlets last month.

Despite Aslund’s praise, the dossier’s most explosive allegations about Trump have either been debunked or remain uncorroborated. The special counsel’s office issued a report that said investigators found no evidence of a conspiracy between the Trump campaign and Russia.

Danchenko himself said that his sources provided him only with unverified rumors about Trump and his campaign aides’ activities related to Russia.

Aslund told the DCNF he still views the dossier as “largely credible.” He said he does not have an opinion on whether Steele’s allegations about Alfa Bank are accurate.

“I have no view whether the Alfa Bank issue in the Steele Dossier is credible or not,” he said in an email. “One cannot know what one does not know.”