A Russian-born analyst living in the United States has been identified as the primary source for Christopher Steele, the author of a now-debunked dossier regarding Donald Trump and members of his campaign.

Igor Danchenko, 42, was identified as the dossier source through a series of events that began with the July 17 release of an FBI memo of interviews conducted with Steele’s primary source in January 2017.

The FBI redacted all information in the memo that might identify Danchenko and six of his sub-sources, but a Twitter user pieced together clues from the memo — such that Danchenko worked as a “facilitator” and had studied in the United States — to identify him as the likely source. The Twitter sleuth created a blog laying out information about Danchenko.

On Saturday, The New York Times confirmed that Danchenko was the source.

“Mr. Danchenko is a highly respected senior research analyst; he is neither an author nor editor for any of the final reports produced by Orbis,” Danchenko’s lawyer, Mark Schamel, told the Times.

“Mr. Danchenko stands by his data analysis and research and will leave it to others to evaluate and interpret any broader story with regard to Orbis’s final report,” said Schamel, referring to Orbis Business Intelligence, the London-based firm owned by Steele.

Danchenko, a former analyst at the Brookings Institution, a liberal foreign policy think tank, undercut some of the dossier’s most explosive allegations about Trump and members of his campaign. His statements to the FBI also suggested that he has far fewer connections to Kremlin insiders than Steele’s allies and the media have suggested. (RELATED: FBI Memo Raises Doubts About Sources Behind Dossier, Ex-CIA Station Chief Says)

Danchenko told the FBI that he shared “rumor and speculation” with Steele that he received from his sources, but that Steele suggested in the dossier that the information was confirmed.

He said that he heard rumors that Trump had used prostitutes in a Moscow hotel room in 2013 and that the Kremlin had video tape of it. Danchenko said that one of his sources inquired at the hotel about the alleged incident but was unable to confirm that it happened.

Steele alleged that Page, a member of the campaign’s national security team, was a central figure in the “well-developed conspiracy of coordination” between the Trump campaign and Kremlin. Steele wrote that it was Page’s idea to use WikiLeaks to release Democrats’ emails during the campaign. He also alleged that Page met secretly with Kremlin insiders in July 2016 to discuss relaxing sanctions against Russia in exchange for election help.

Regarding Cohen, Steele wrote that the former Trump acolyte flew to Prague in August 2016 to meet with Kremlin officials regarding the election.

The special counsel’s report debunked the claim about Cohen, saying that he did not visit Prague. It also said that no Trump associates conspired with Russia or helped release emails through WikiLeaks.

A Justice Department inspector general’s report of the FBI’s investigation said that the bureau received evidence on Jan. 12, 2017, two days after BuzzFeed published the dossier, that the Cohen allegation may have been the product of Russian disinformation.

The FBI and Justice Department identified Danchenko as Steele’s source the following day, according to The Times.

The IG report said that the FBI received other evidence that Russian intelligence operatives knew that Steele was investigating the Trump campaign as early as July 2016.

Danchenko describes six sources in all that he used for information in the dossier. One of those is purported to be Sergei Millian, a Belarusian-American businessman referred to as “Source 6” in the FBI.

News outlets with close ties to Fusion GPS fingered Millian on Jan. 24, 2017, as the main source behind the Trump sex tape claim.

But Danchenko’s statements, if true, are inconsistent with the narrative that Millian is a source for the salacious Trump allegation. Danchenko told the FBI that he never met Millian and believes he spoke to him by phone only once in late July 2016.

Steele’s memo regarding the sex tape allegation is dated June 20, 2016.

According to information he put online, Danchenko attended high schools in the United States in the 1990s as part of an exchange student program. He graduated from Perm State University in Russia and received a master’s degree from the University of Louisville in 2005.

He worked for five years at the Brookings Institution as a Russia analyst. While there, he wrote a paper with Fiona Hill, who joined the Trump White House in 2017 as its top Russia expert.

Danchenko was charged in federal court in March 2013 with disorderly conduct, drunk in public and failure to restrain a child in a safety seat, court documents show. 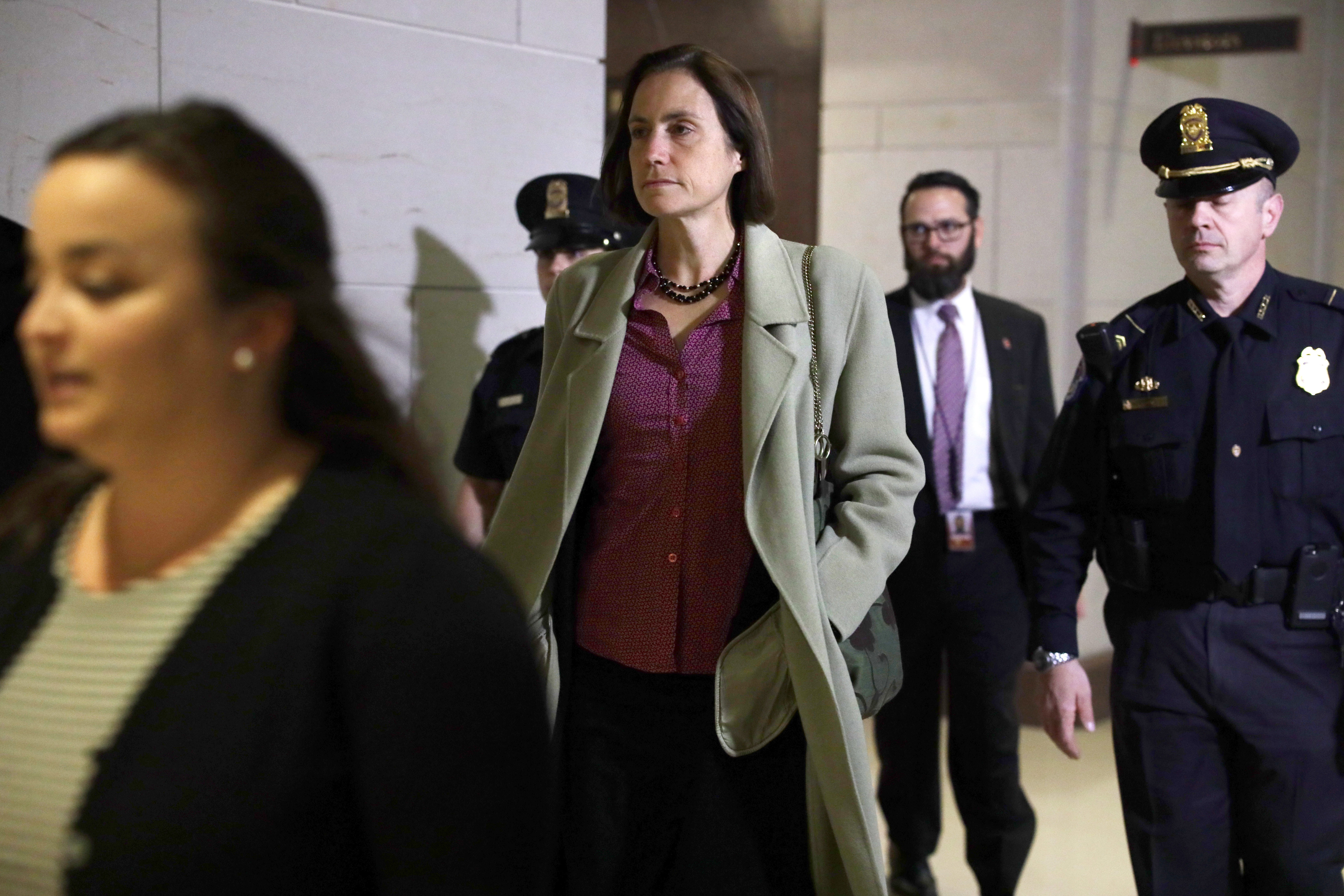 Fiona Hill, former deputy assistant to the President and Senior Director for Europe and Russia on the National Security Council staff, arrives at the U.S. Capitol on November 4, 2019 in Washington, DC. (Photo by Alex Wong/Getty Images)

The court filings, first reported by Real Clear Investigations, also show that Danchenko was a Russian national who has a visa to work in the United States.

Hill said that she was floored when she learned that Steele was behind the document. Hill, who had worked with Steele while he was with MI6, said that she believed the dossier contained Russian disinformation.

Rep. Devin Nunes said this week that he is looking into the role that Brookings played in spreading the dossier.

Danchenko appears to have left Brookings years before he began working on the dossier project.

Danchenko told the FBI that he met Steele several years before the start of the Trump investigation. Steele testified in a British court case in March that he paid the source up to $5,000 a month on retainer. (RELATED: EXCLUSIVE: Steele Told British Court His Emails Were ‘Wiped,’ Had No Information From Dossier Source)

Danchenko told the FBI that in March 2016, Steele asked him to look into Paul Manafort, a Republican political operative who joined the Trump campaign a month later.

Steele worked for a law firm that represented Oleg Deripaska, a Russian oligarch who had a business dispute with Manafort.

Danchenko told the FBI he was perplexed by Steele’s tasking because he knew little about Manafort.

He said that Steele tasked him with working on the Trump project several months later.

Steele had been hired in June 2016 by Fusion GPS, an opposition research firm employed by the Clinton campaign and the Democratic National Committee to investigate Trump’s possible ties to Russia.

The FBI identified Danchenko as Steele’s source on Jan. 13, 2017, and conducted interviews with him from Jan. 24-26, 2017. The FBI’s memo says that Danchenko spoke to the FBI and prosecutors under a proffer agreement, meaning that he had immunity for anything he might say in the interview.

The IG criticized the FBI for withholding information it received from Danchenko that undermined the dossier. The report said that the FBI characterized Danchenko as appearing to be reliable and truthful, but failed to disclose that his information raised doubts about the dossier.

The Daily Caller News Foundation called a phone number associated with Danchenko earlier this week. A man who answered said that Danchenko was not available and that he would pass along a message.