For many Portlanders, the small red house on North Mississippi Avenue is much more than just a house – it’s a means to fight back. Whether against gentrification, systematic displacement, racism or predatory lending, take your pick. It’s a giant, red middle finger to The Man around which the community has found purpose.

The general details sound like a story straight out of Hollywood: Civil rights activists flock to protect a black, indigenous family and the historic home that’s been in their name for decades from the big, bad and probably racist government. But the story gets significantly stranger beneath the feel-good veneer, court documents reveal.

The now-infamous Portland, Oregon, home is located in the midst of new, multi-million-dollar condominiums. Built in 1896, it’s been in the Kinney family for 65 years, according to a website advocating for the home. The website’s domain name is owned by the “Kinney Family,” according to WHOIS records.

Three family members at the center of the current controversy are William Kinney Jr., his wife Julie and their son William III, who now goes by William X Nietzche. The Caller reached out to Nietzche seeking clarity on both the website and details of the family’s court filings, but requests for comment went unanswered. (RELATED: Portland Autonomous Zone Is ‘Stockpiling Weapons,’ Has Armed Patrols, Police Say)

Protesters have been present at the home since September in an effort to prevent eviction after the family let the mortgage lapse and city officials attempted to forcibly remove them. Months later in early December, the protesters expanded efforts into what they called an “eviction blockade.”

The family and others involved in the fight blame the situation on a mortgage scam and fraud, according to the site, and have declared it an unfair, targeted eviction. Perhaps as a result, the backlash against city officials is strong, and the family has reclaimed the property – despite it being sold by the bank.

The reality, however, is not so simple. 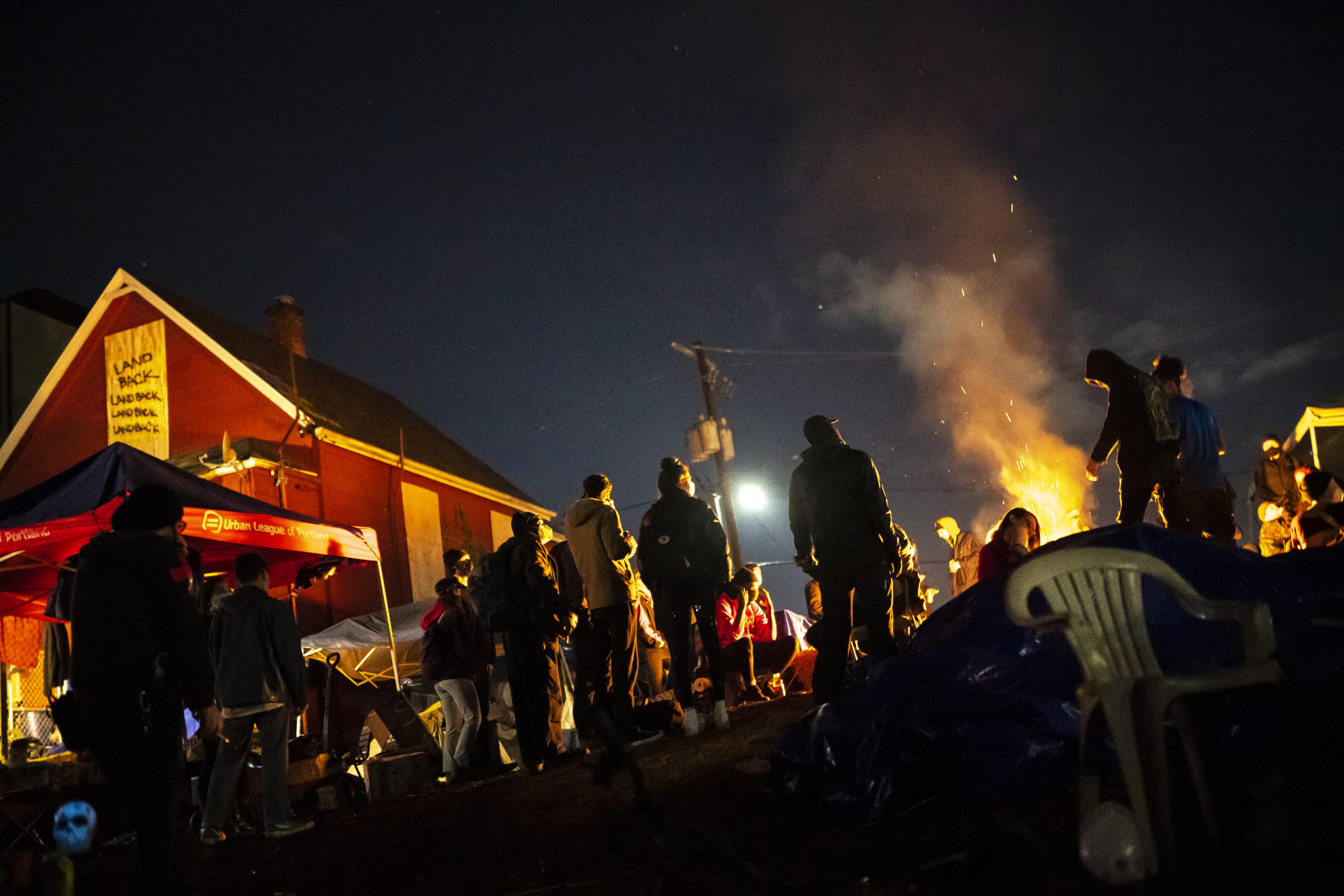 Protesters plan their next action while standing around a fire near the Red House on Mississippi Street on December 9, 2020 in Portland, Oregon. (Nathan Howard/Getty Images)

The issues, according to the Kinney family, date back to 2002

The Kinney family trace their issues back to 2002, when they took out a loan against their home for legal fees surrounding their son, William III. The “Kinney Family” website describes this incident lightly, noting that “William III was taken to prison at the young age of 17 for an automobile accident.”

In fact, William III pleaded guilty to a felony hit-and-run, third-degree assault and what Oregon Live described as the “juvenile equivalent” of “criminally negligent homicide.” He was driving with a suspended license and speeding when he ran a stop sign and hit a car, ultimately killing an 83-year-old man and injuring his wife.

These details are not noted in the “Kinney Family” website.

The Kinneys refinanced their loan in 2004 but eventually stopped making the loan payment when, according to them and court documents, they began receiving paperwork from two different entities. In May 2018, according to the “Kinney Family” website, “Clear Recon Corporation was appointed as successor trustee of the 2004 Deed of Trust and they initiated the process to foreclose on the Kinney’s home.”

The Kinneys did more than oppose the foreclosure suit in Oregon state court; they filed two separate but ultimately unsuccessful lawsuits in federal court trying to stop it from going forward. These lawsuits came despite the fact that the Kinneys were given multiple notices and options to pay their outstanding debt and ultimately prevent foreclosure.

When the Kinneys received the opportunity to pay back the money in January 2017 and throughout the State Court foreclosure proceedings, Julie Kinney responded with a lengthy statement declaring herself a “living American sovereign,” one court document dismissing their complaint shows.

In essence, the Kinneys claimed to be citizens of a country that they invented, and Julie Kinney’s statement listed five reasons for rejecting the offer. One was common — Julie alleged that the foreclosing mortgage company, Rushmore, “failed to state a lawful claim upon which relief can be granted.” The other four were atypical for mortgage disputes:

The court documents detail a bizarre, years-long process of a family willing to cook up just about any claim as they fought to stay in a home they stopped paying for.

In one pleading from their first federal lawsuit, filed November 2018, the Kinneys admitted that they stopped making payments on their second mortgage loan in January 2017 upon receiving payment notices from two separate mortgage servicing companies. Banks often sell their loans to service companies and as a result, the loan can change hands.

Rather than working to straighten out the confusion, which is what homeowners typically do, the Kinneys appear to have used the situation as a reason to stop making payments altogether.

The notice describes William Kinney as “Mickey Pharaoh” and his wife Julie as “Jew-el Empress of Compassion.” Their son, who represented the family after multiple lawyers reportedly turned them down, goes by “Heir Apparent.” 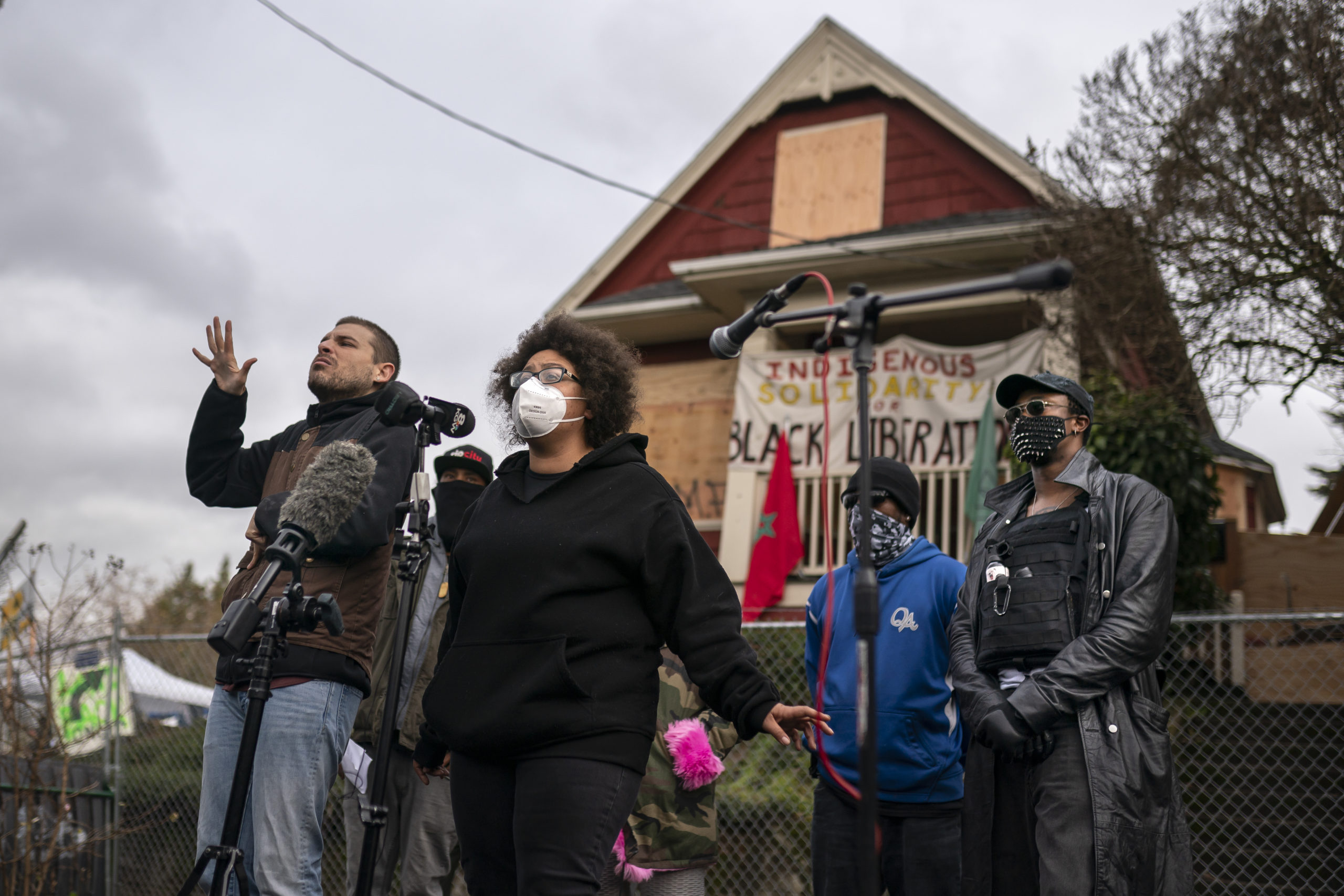 Activists and the Kinney family speak to the press about the citys attempted eviction of residents from the Red House on Mississippi Ave on December 9, 2020 in Portland, Oregon. (Nathan Howard/Getty Images)

These elaborate signatures were likely meant to further bolster claims that the family are an indigenous and sovereign people, and therefore somehow exempt from the foreclosure.

An amended complaint in that same case added allegations of genocide and claimed that the foreclosure process was a violation of the United Nations Declaration on the Rights of Indigenous Peoples.

The court dismissed all of the Kinney family’s claims “with prejudice,” noting that as to the genocide inclusion, “There is no private right of action under this criminal statute.” Similarly, it declared that the United Nations declaration “does not create obligations binding in federal court that give rise to a private right of action.”

The Court dismissed the entire first complaint – comprising some 26 different causes of action against 21 named defendants, including some defendants that had never appeared in the case – because “Even under the generous standard afforded pro se litigants, Plaintiffs fail to state a claim against any Defendant.”

In yet another twist, the first federal lawsuit was filed in the name of a trust called “House of KRME.” The trust claims to be “domiciled in the ancient Mosan/Salish Territory for Multnomah Republic.” (At some point it appears that the Kinneys attempted to transfer ownership of the Red House to the trust.)

The first dismissal did not discourage the Kinneys.

The second complaint quickly deemed “incoherent” by the Judge

The family filed a second complaint in January 2020, once again against a whole slew of defendants. They even sued the judge from the first case, court documents reviewed by the Caller show. Most of the claims had nothing to do with the foreclosure.

The Kinneys’ second lawsuit accuses the first judge of being an alter ego of the Urban Housing Development LLC, another defendant. It also accused him of acting outside of his authority and sought damages of “the lesser of $1,000,000 per say or $5,000,000” from him personally.

“Plaintiffs 81-page complaint is largely incoherent, and rests on conclusory statements and bare allegations that do not state plausible or legally cognizable claims,” Mosman wrote.

The judge further noted that the second complaint included “vague allegations” that “go nowhere,” and pointed out that the allegations against the first judge – Judge Michael H. Simon – failed “to state a plausible claim for relief.” 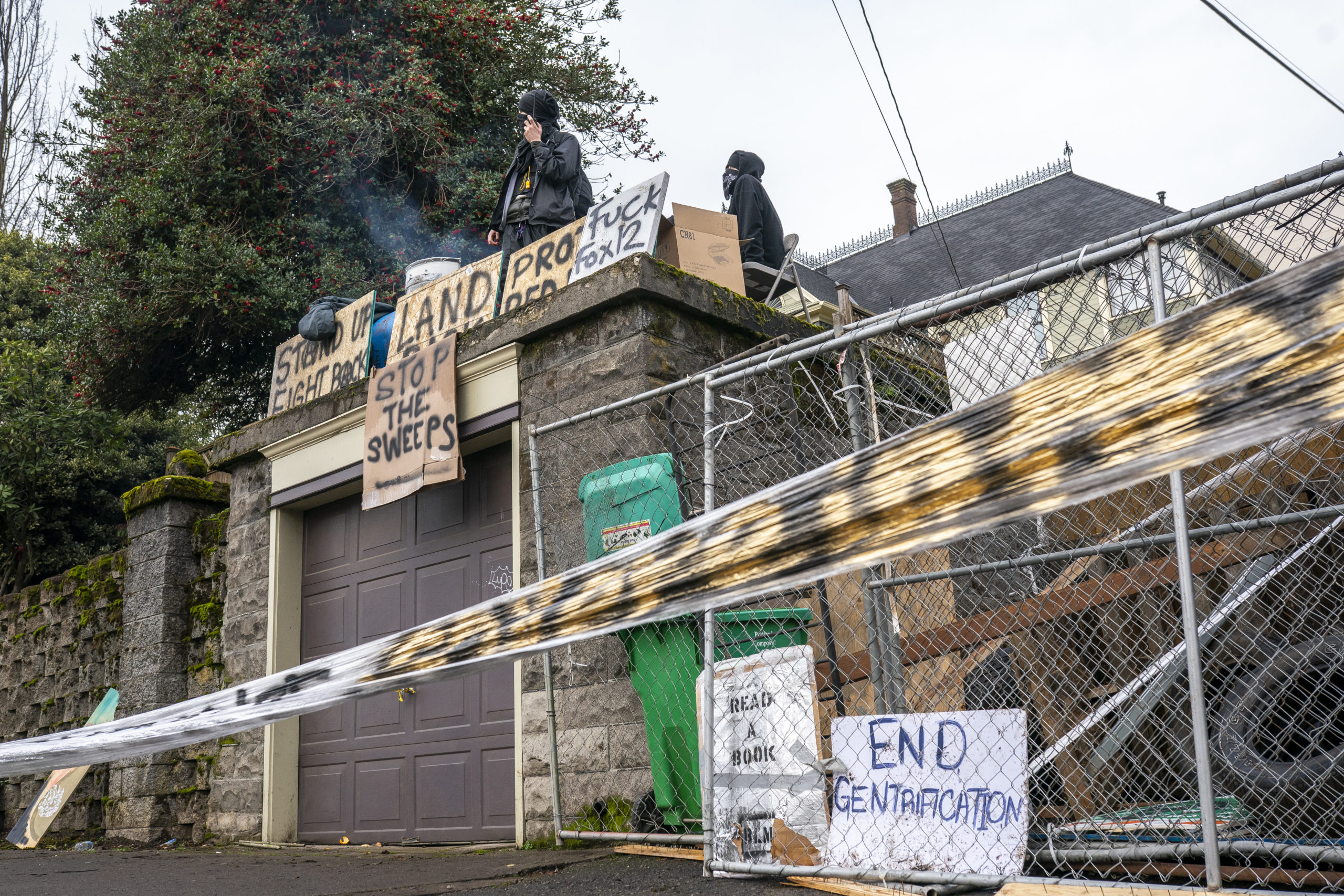 Protesters keep watch at the edge of an eviction blockade on December 10, 2020 in Portland, Oregon. (Nathan Howard/Getty Images)

Ultimately, this second complaint “appears to be an effort to re-litigate grievances that received over a year of attention from this court and were ultimately dismissed with prejudice,” Judge Moseman ruled.

Despite two court rulings dismissing the Kinneys’ complaints, the family is now appealing the first district court’s decision to the U.S. Supreme Court. This request is a publicly available document – but William Kinney is selling it on Amazon for $9.98.

The family even owns a second house in the same neighborhood

Part of the allure surrounding this story is the fact that America is in a global pandemic and there is an eviction moratorium in Oregon. The Red House was foreclosed on back in 2018, however, well before COVID-19 hit the world.

The Kinneys also reportedly own a second home in the neighborhood, Oregon Public Broadcasting reported Dec. 11. This second home is very close to the Red House and has been owned by the family since 1966. The Kinneys are currently living there, according to OPB:

Property records show the home is owned by Pauline Kinney, who alongside her husband William TR Kinney, purchased both properties in the 50s and 60s. Pauline Kinney sold the red house to her daughter, Julie Kinney, in 1995 for $20,000. Julie Kinney’s sons have helped lead the legal fight and protest to keep the red house in Kinney family ownership.

A Twitter page linked by the “Kinney Family” website pushed back on OPB’s reporting and claimed that it is “the Kinney siblings’ grandma’s house” and that it “is NOT a second home.”

An activist group involved in the blockade announced Sunday that the Kinney family reached a tentative deal with city officials, despite the fact that the situation has already gone through the courts. Negotiations remain ongoing, but protesters agreed to remove the barricades by Monday evening with the expectation that police will refrain from forcibly removing the family until an official agreement is reached, Oregon Live reported.

Meanwhile, a GoFundMe organized by Coya Crespin, a Portland Metro Regional Organizer, has raised over $308,000 so far for the family to buy back the Red House. Crespin works with the Community Alliance of Tenants, a grassroots organization that “educates, organizes and develops the leadership of low-income tenants,” according to its website.

The GoFundMe money is not going directly to any of the three Kinneys noted throughout the legal filings. Instead, the benefactor is listed as Michele Metcalf, whom Oregon Live described as Nietzche’s sister.

It remains to be seen what will become of the Kinney family or the activists pushing for them to remain in a home they no longer own. Roman Ozeruga of Urban Housing Development, reportedly the home’s new owner, appears willing to sell the house back to the Kinney family.

What’s unclear, however, is if a family willing to invent a new country in order to avoid paying debt will come to the table.