Public schools across the country may face a crisis as enrollment levels plummeted following closures of in-person learning, the Associated Press reported.

The AP and Chalkbeat’s analysis of 33 states’ data on K-12 public school enrollment showed that more than 500,000 students have left the system. The 2% decline is significant, because trends have previously shown that overall enrollment was increasing until schools began to close in 2020, shifting education entirely online for thousands of students.

NEW: A @Chalkbeat + @AP analysis of fall enrollment data from 33 states shows that K-12 public school enrollment has fallen by ~2% or 500K+ students. Of that ~30% is attributable to a drop in kindergarten. w/ @lamarr_lemee @LeahMWillingham + @larry_fenn https://t.co/4HyudiJn5k

The enrollment decreases could begin to affect funding, since it’s tied to head counts.

The analysis reportedly doesn’t yet include 17 states that have released their data on enrollment numbers, meaning analysts expect the number of students that have left the public school system to grow.

Kindergarten enrollment accounted for 30% of the decline, as many families may have chosen to either skip it because it’s not required or pursue a different education setting for young children.

It was unclear from the analysis how many families opted for private schools, which may have opened while local school districts remained closed, or homeschooling. In Massachusetts, public school enrollment dipped by 3%, and half of the students that left were instead being homeschooled or enrolled in private schools, but 7,000 students were unaccounted for.

In Wisconsin, a study showed that 34 districts that started the school year with virtual learning saw a 3% decrease in enrollment, while the state’s school enrollment declined 2.67%. Meanwhile, private school choice programs grew by more than 2,700 students as public schools saw declines of 36,000.

Virginia’s largest school system, Fairfax County Public Schools, has had 8,700 students withdrawn from the district, marking a 5% enrollment decrease. The district’s own report also found that students were increasingly failing virtual classes. (RELATED: ‘We Are Breaking’: Parents Describe How Virtual Learning Has Traumatized Their Children) 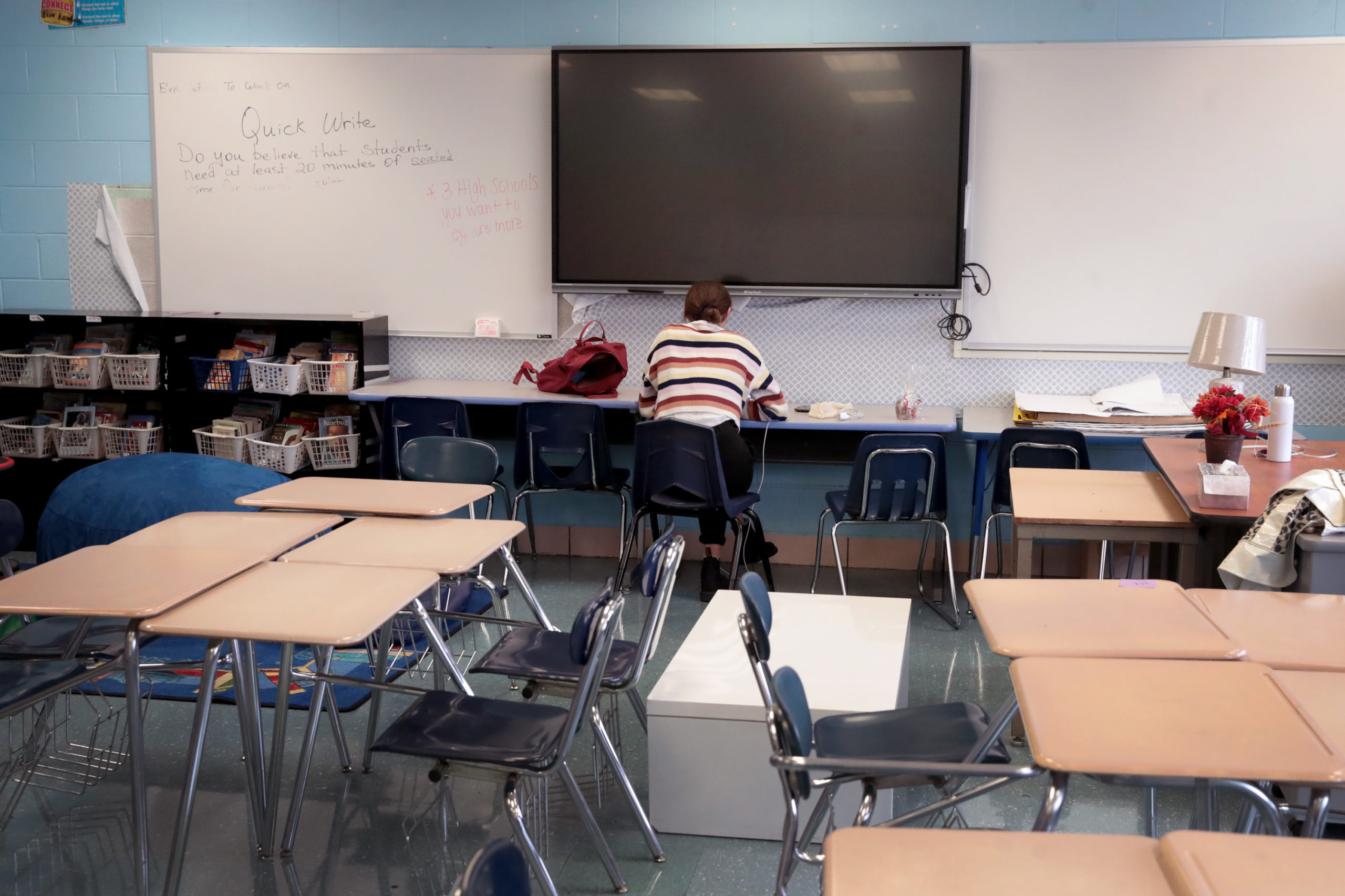 CHICAGO, ILLINOIS – SEPT. 08: Hannah Chorley, a teacher at King Elementary School, sits in an empty classroom teaching her students remotely during the first day of classes on Sept. 08, 2020 in Chicago, Illinois. (Photo by Scott Olson/Getty Images)

The switch to virtual schooling has raised concerns about students’ mental health and academic performance, especially in districts where students have yet to return to classrooms after the initial wave of shutdowns in the spring. The White House has warned of the “unintended consequences” of not reopening schools, such as causing long-term damage to childhood development and disproportionately impacting minority and low-income students.

President-elect Joe Biden pledged to reopen most schools within the first 100 days of his presidency, as long as Congress provides enough funding for students and teachers to return.