Some formerly-incarcerated activists alleged to the AP after their release that the cells holding them were “massively crowded,” lacking adequate ventilation, proper medical treatment, or basic amenities.

“Humid walls covered by parasites, the shocking lack of sanitary measures, shivering cold and a rusting bed — that was what I got in prison in Mogilev instead of medical assistance,” jailed 35-year-old musician Kastus Lisetsky told AP via telephone. “I had a fever and lost consciousness, and the guards had to call an ambulance.”

A wave of COVID-19 has engulfed prisons in Belarus that are packed with people in custody for demonstrating against the nation’s authoritarian president.

Lisetsky had received a 15-day sentence for attending a protest, according to AP. Eight days after being imprisoned, he was hospitalized for contracting a severe fever. Lisetsky was diagnosed with COVID-19 induced double-sided pneumonia, the outlet reported.

He blamed the Belarusian government for allowing the virus to spread wildly among political prisoners.

“The guards say openly that they do it deliberately on orders,” Lisetsky said.

Before his imprisonment, Lisetsky and three bandmates were reportedly detained in a Minsk jail and forced to sleep on a cell floor intended for two people. All four had contracted COVID-19, according to AP. 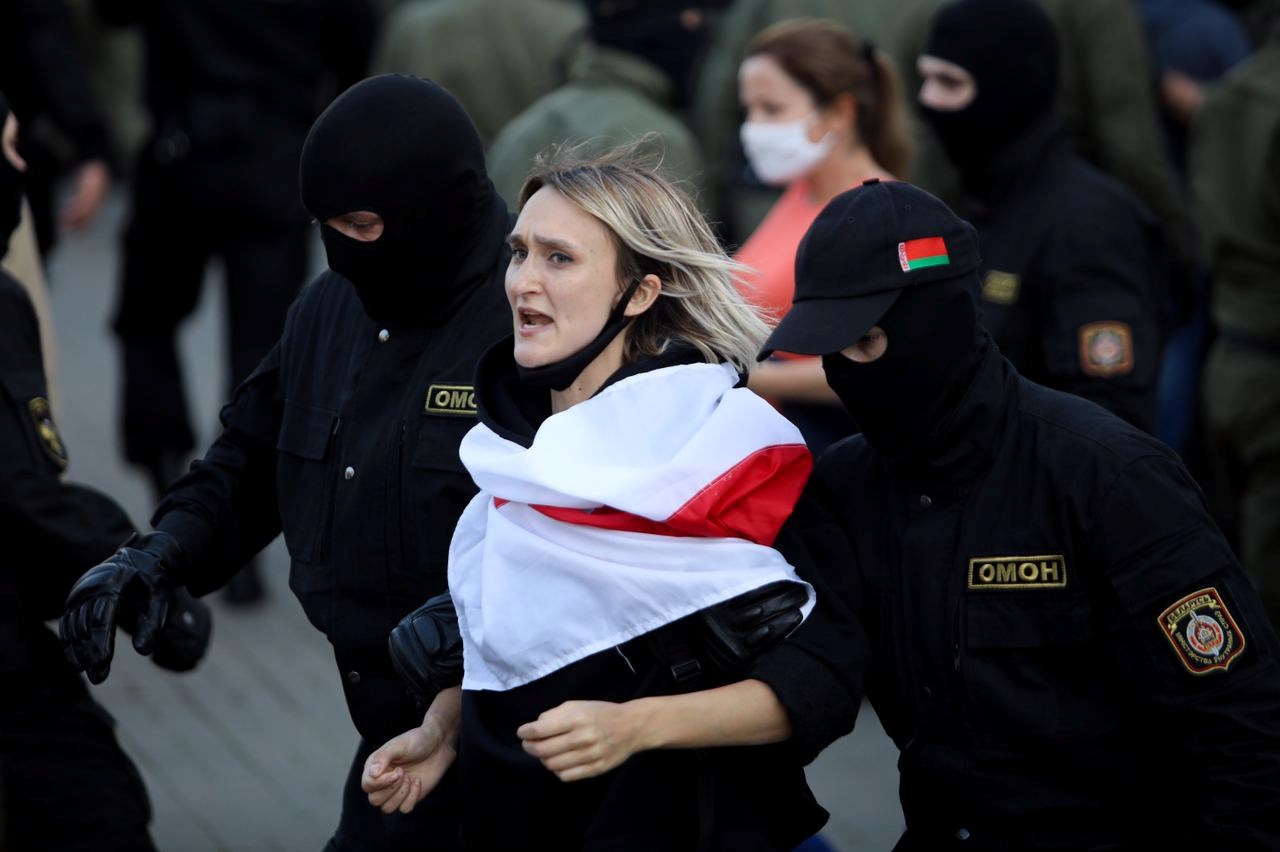 Belarusian law enforcement officers detain a woman during an opposition rally to protest against police brutality and to reject the presidential election results in Minsk, Belarus September 19, 2020. The Belarusian government’s crackdown on similar protests has resulted in the United States slapping sanctions on the ruling regime. (Photo Credits: BelaPAN via REUTERS)

“It was like a mockery, doctors weren’t responding to pleas and complaints,” Artsiom Liava, a 44-year-old journalist who contracted COVID-19 during his wait in jail for a court hearing, told AP. “It was forbidden to lie down during daytime and mattresses were folded up. We all felt exhausted, but we were forced to stay seated on iron beds in the basement without any access to fresh air.”

On Wednesday, the United States sanctioned additional actors close to the Belarusian regime for their role in Belarus’ “fraudulent” August presidential election and the subsequent crackdown on peaceful demonstrations against the election’s results.

On October 25, Belarus police used stun grenades on 100,000 people who protested their current President Alexander Lukashenko. This was part of a series of violent crackdowns the Belarusian regime engaged in against its civilians following the disputed election.

The United States and the European Union states have sanctioned the regime for “repression” and “undermining democracy.”