A recent dinosaur fossil from China currently on display at the Senckenberg Museum of Natural History in Frankfurt, Germany, includes the hole that the animal used to urinate, defecate and copulate.

The fossil is of a Labrador-sized dinosaur called Psittacosaurus, according to CNN, and preserves the animal’s cloaca. While most mammals have more than one hole for different bodily functions, many other animals have a cloaca, a singular hole for performing those functions. 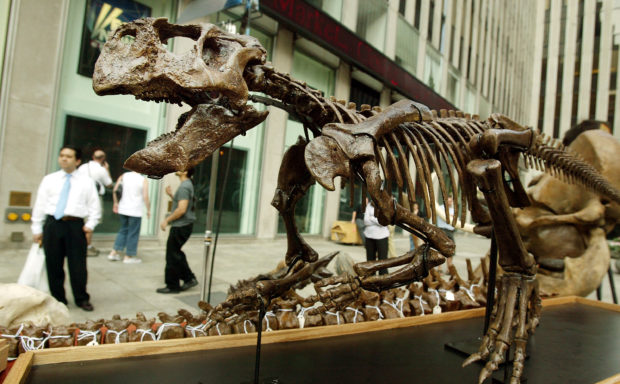 Though the fossilized cloaca on the Psittacosaurus specimen confirms that dinosaurs had it, it is quite different from those found on living animals. (RELATED: Dinosaur Sells For $3.5 Million In Paris Auction)

“It’s very unique,” said University of Bristol paleontologist and senior lecturer Jakob Vinther. “Most cloacas form a kind of slit. Sometimes it’s a vertical split, sometimes it’s a smiley face, sometimes it’s a sour face. This thing has a V-shaped structure with a pair of nice flaring lips and there’s not a living groups of animals that have morphology like that.”

Vinther added that the Psittacosaurus cloaca is “somewhat similar to crocodiles but still unique.”

The outer margins of the dinosaur’s cloaca were found to be highly pigmented with melanin, CNN reported. This doesn’t reveal exactly what color the cloaca was, but suggests it contrasted with the animal’s pale underbelly.

Some paleontologists believe that dinosaurs mated through “cloacal kissing,” pressing together their openings as is the case with most birds, the only living relative of dinosaurs. However, Vinther believes the fossilized cloaca’s similarity to that of crocodiles indicates that the Psittacosaurus had a penis like modern crocodiles do.

“From what we can see, this cloaca would not have been suitable for cloacal kissing,” Vinther said. “It looks like it would have been penetrative sex.”