Elected officials have largely fallen short of protecting small businesses nationwide throughout the pandemic, even as they have continued to impose devastating restrictions.

While several prominent business advocacy groups told the Daily Caller News Foundation that lawmakers have successfully enacted small business-friendly policies since the spring, the coronavirus pandemic has led to roughly a third of U.S. small businesses to close in 2020, according to Harvard University’s Economic Tracker.

“Despite the pro-business, pro-small business rhetoric we hear from a lot of elected officials, when it comes time to vote, they seem to have stronger allegiances with other interest groups, oftentimes labor,” Ken Pokalsky, vice president of the Business Council of New York State, which represents about 2,300 member businesses, told the DCNF.

Meanwhile, the Chamber of Commerce’s vice president of small business policy, Tom Sullivan, told the DCNF that all businesses, regardless of size, are mutually reliant.

“I think that the large and small business symbiosis, mutual reliance and the value of both is real,” Sullivan said.

“I just don’t think that trying to convince Congress to help small business has to coincide with tearing down publicly traded companies,” he continued. (RELATED: ‘Strong Can Get Stronger’: Corporations Prosper During Pandemic As Small Businesses Struggle To Survive)

But major corporations have thrived as small businesses have crumbled under the weight of pandemic restrictions. 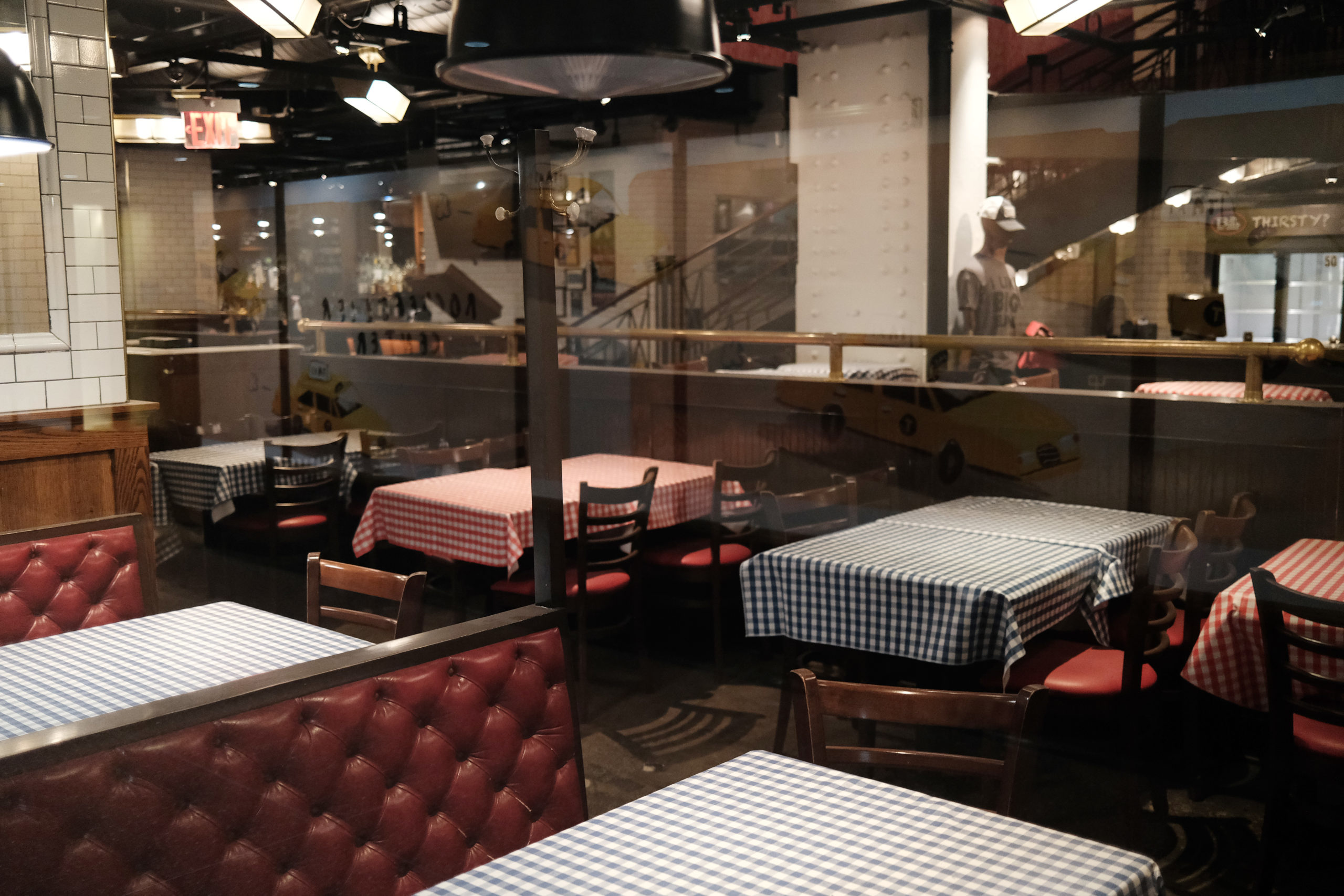 Between Jan. 1, 2020, and Dec. 31, 2020, about 30% of U.S. small businesses closed while total small business revenue decreased by 31%, according to Economic Tracker. Conversely, between April and September, 45 out of the 50 most valuable public corporations profited, The Washington Post reported.

“The large companies have these asset bases that the smaller companies cannot compete with, particularly now,” Lauren Silberman, an analyst at Credit Suisse, told the Post.

For example, McDonald’s had the delivery, mobile app and drive-thru infrastructure ready before the pandemic, giving it a massive advantage when businesses were forced to shutter in the spring, The Post reported.

Amazon CEO and founder Jeff Bezos’s 2020 wealth increase spiked particularly in April as coronavirus spread around the world and as the online retailer’s stock price increased significantly, a Business Insider analysis found. Amazon sales, which were high prior to the pandemic, have surged as the e-commerce marketplace became consumers’ default destination, CNBC reported. (Here’s How Much More Jeff Bezos And Walmart Heirs Made Than Their Employees During The Pandemic)

Pokalsky criticized the measures Democratic New York Gov. Andrew Cuomo had taken to restrict “non-essential” businesses. Governors across the country from California and Oregon to Michigan and New Jersey have implemented similarly strict measures of their own such as banning indoor dining, limiting how many people can be inside a retail business at once and closing gyms since the outbreak of coronavirus. 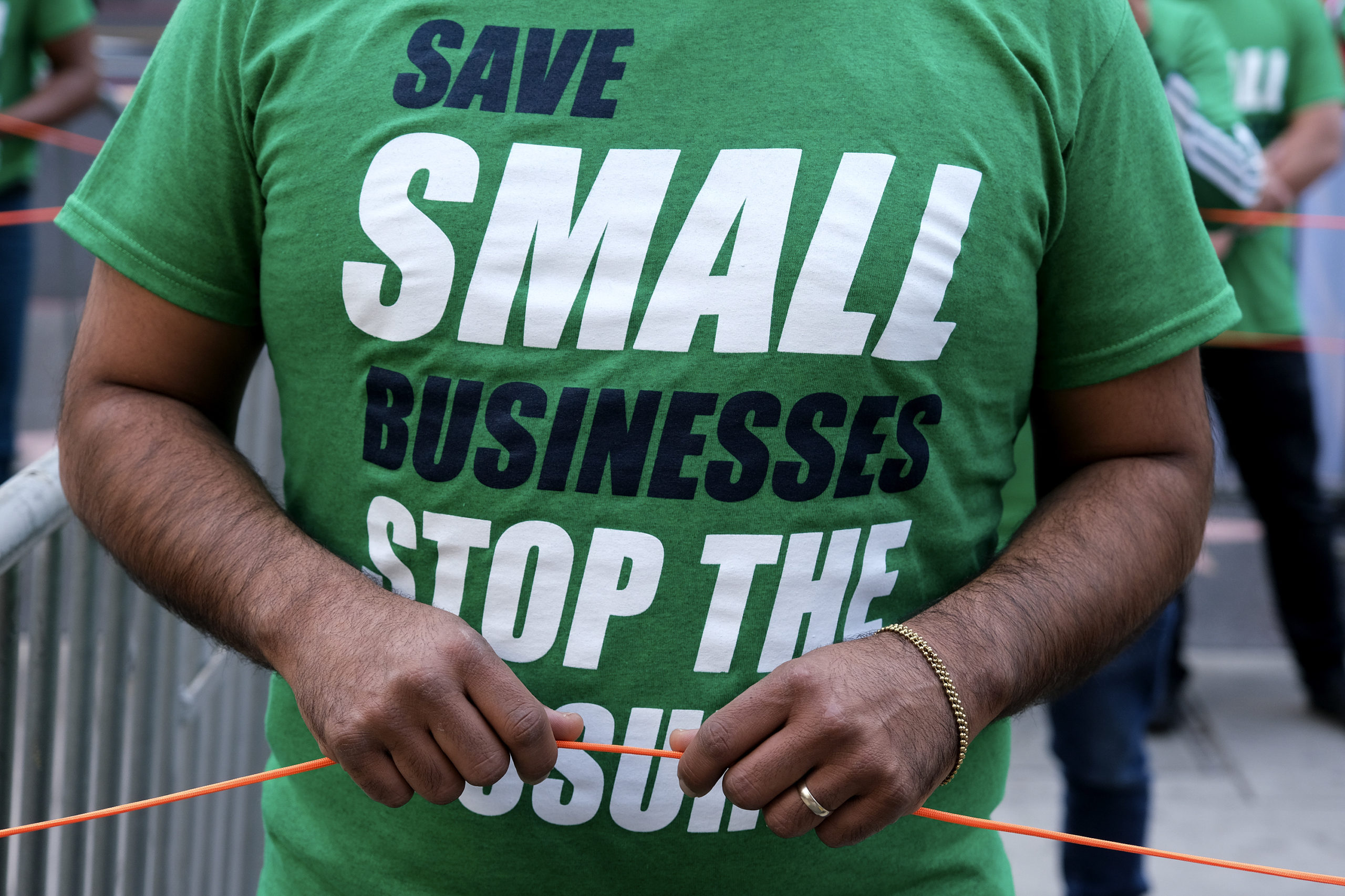 Policies To Save Small Business

“Unfortunately, Washington, when it’s able to get anything done at all, persists in pursuing policies that favor large corporations over Main Street,” Small Business Majority said in a December statement.

“And, all too often small business is perceived as just another narrow interest group, not an essential component of our economic prosperity,” it continued.

Small Business Majority has additionally pushed for legislation that would ensure existing business insurance policies would apply to coronavirus-related revenue losses. As a long-term policy goal, Small Business Majority has advocated for a moratorium on future unemployment insurance rate increases that would potentially punish small businesses in the wake of the pandemic.

“Our message to state and local leaders [is] that small business can operate safe and smart, so let them open up,” Karen Kerrigan, president and chief executive officer of the Small Business and Entrepreneurship Council (SBE), told the DCNF. “Some heard, others continue to act unreasonable in this regard.”

“I can understand why small businesses feel like they are not being defended. Many of the state politicians are ‘having their moment’ and acting unreasonably by exerting extraordinary control over economic activity and personal mobility,” she added. 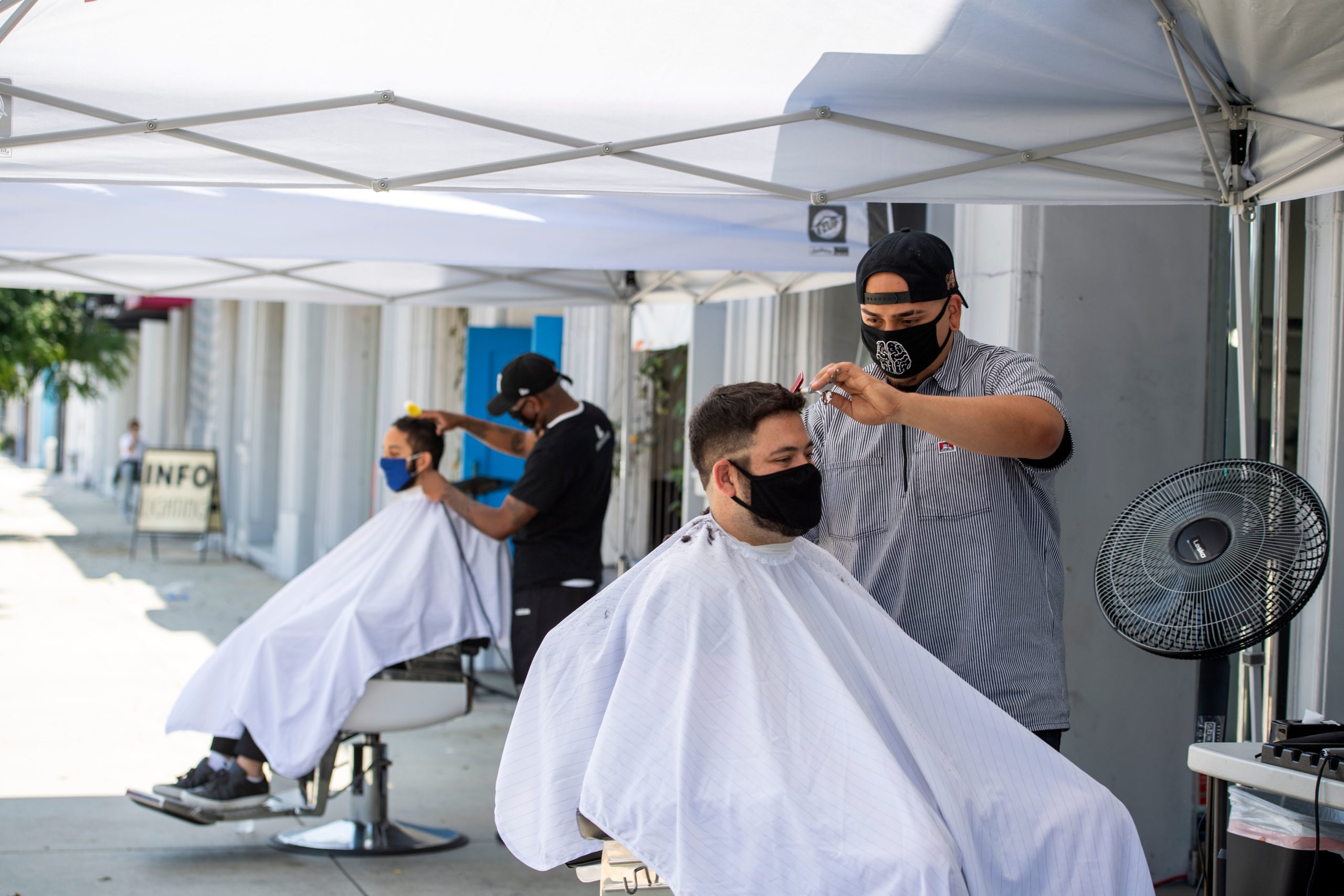 In addition to advocating reopening, SBE has pushed for a temporary liability shield for small businesses during the pandemic and opposed a measure in the recently passed National Defense Authorization Act that would impose new regulatory burdens on small businesses, Kerrigan said. The measure mandated new reporting requirements for most small businesses with less than 20 employees, according to the National Federation of Independent Business (NFIB), which opposed the mandate as well.

Mike Whatley, vice president for state and local affairs at the National Restaurant Association, told the DCNF that the organization has opposed future tax increases on small business specifically. After the devastation that coronavirus has done to state and local budgets, he said governments would be tempted to make up for that lost revenue in the form of new business taxes.

In the short term, the National Restaurant Association has pushed for governments to ease tight restrictions on restaurants, which he said will in turn follow health guidelines and protocols.

“In our mind, restaurants can stay open if they’re following strict safety and health guidance, and can be open in a safe way for their communities,” Whatley said. “So we’ve been encouraging governors and mayors to follow the facts and to work with the industry.” (RELATED: ‘No Layoffs’: Southwest Airlines Announces After Trump Signs Stimulus Bill) 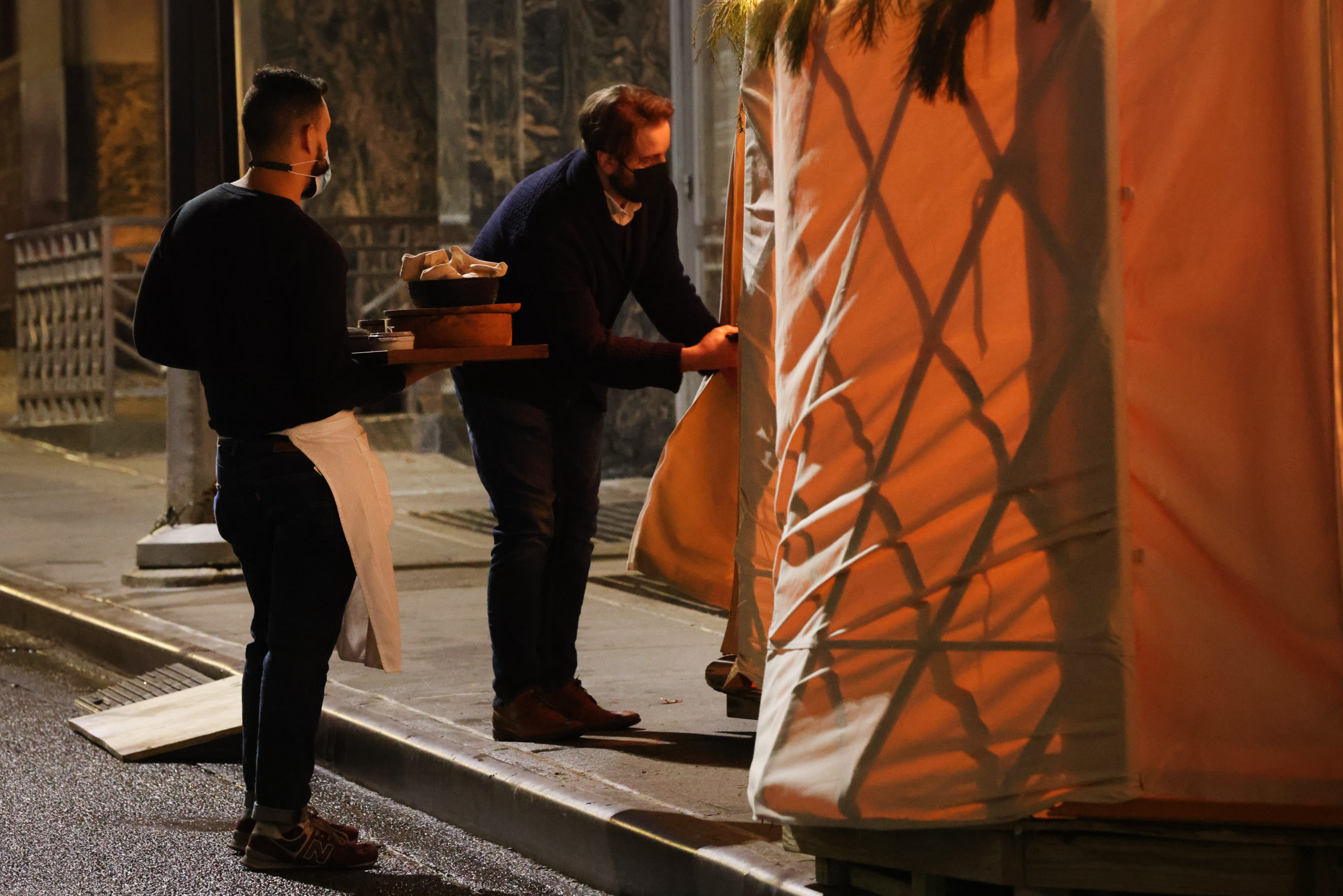 Waiters bring food to an outside yurt on Dec. 9 in New York City. (Spencer Platt/Getty Images)

Regulations help big business by creating barriers to entry – often through trade laws – for small business, a 2020 National Bureau of Economic Research paper that examined large firms in 75 countries including the U.S. concluded. Corporations have even lobbied government to impose tighter regulation on their industries, Axios reported.

Big business can afford the staff to deal with additional regulatory burdens, Adam Smith Institute President Madsen Pirie wrote in 2015. Such businesses are more worried about smaller competition than government regulation, he argued.

The Chamber of Commerce report found an increasing regulatory burden on small business from both the federal government and more than 90,000 local governments. It pointed to minimum wage laws, workers compensation laws and unemployment insurance as harmful for small business.

“COVID relief loan programs have helped millions of small businesses and tens of millions of American workers when they needed it most,” a Small Business Administration (SBA) spokesperson told the DCNF in a statement. 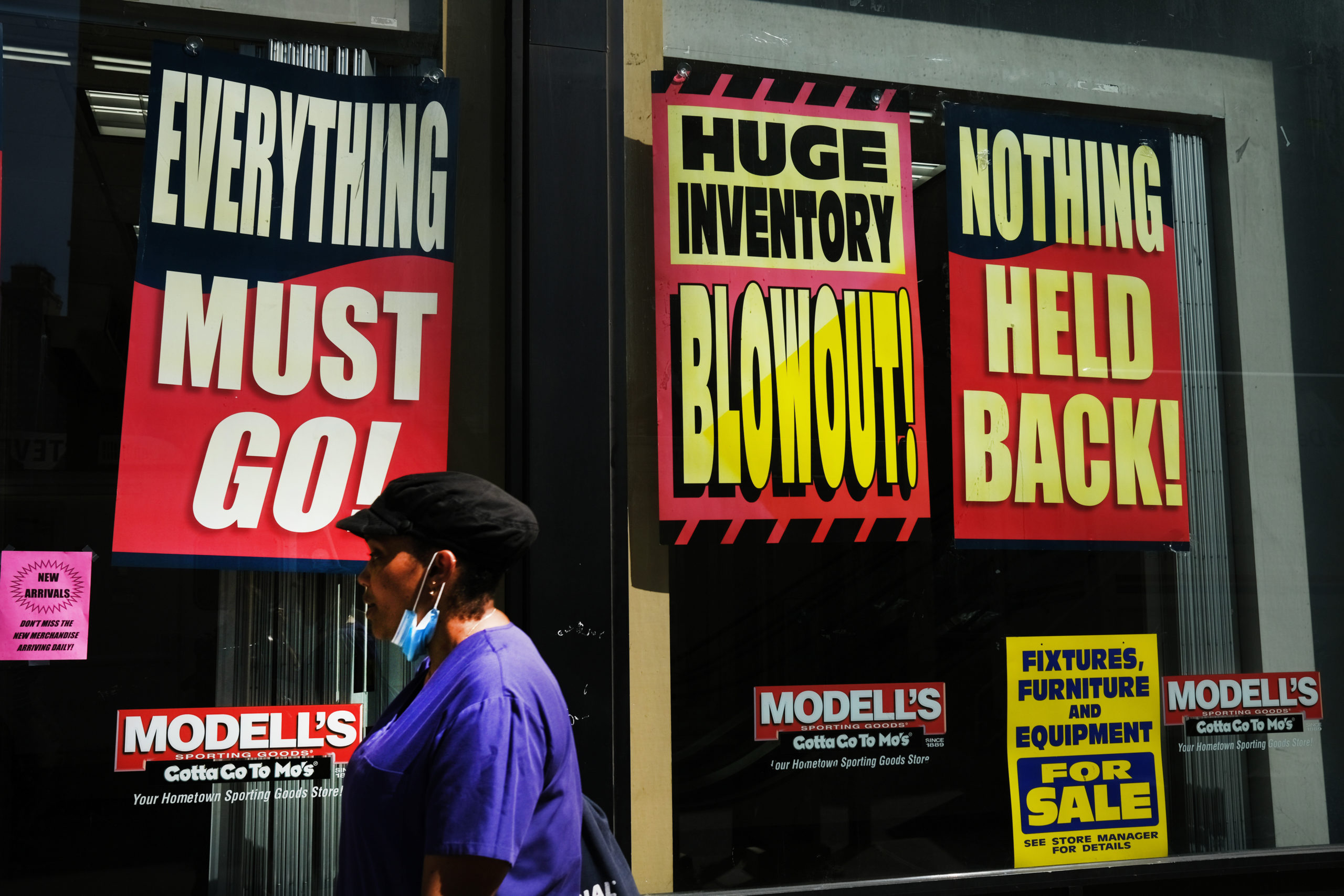 A woman walks by a closed business on July 21 in the Brooklyn borough of New York City. (Spencer Platt/Getty Images)

A wide range of small business advocacy groups have rallied in the push for small business loans. The groups, which formed a new unified coalition with groups on both sides of the aisle, have been successful in this effort lobbying Congress.

Sullivan pointed to a Dec. 7 letter and a July 9 letter sent to congressional leaders by more than 25 small business advocacy groups each, urging additional emergency relief for struggling small businesses. He said the groups, many of which have had notable policy disagreements with others, came together as one voice. 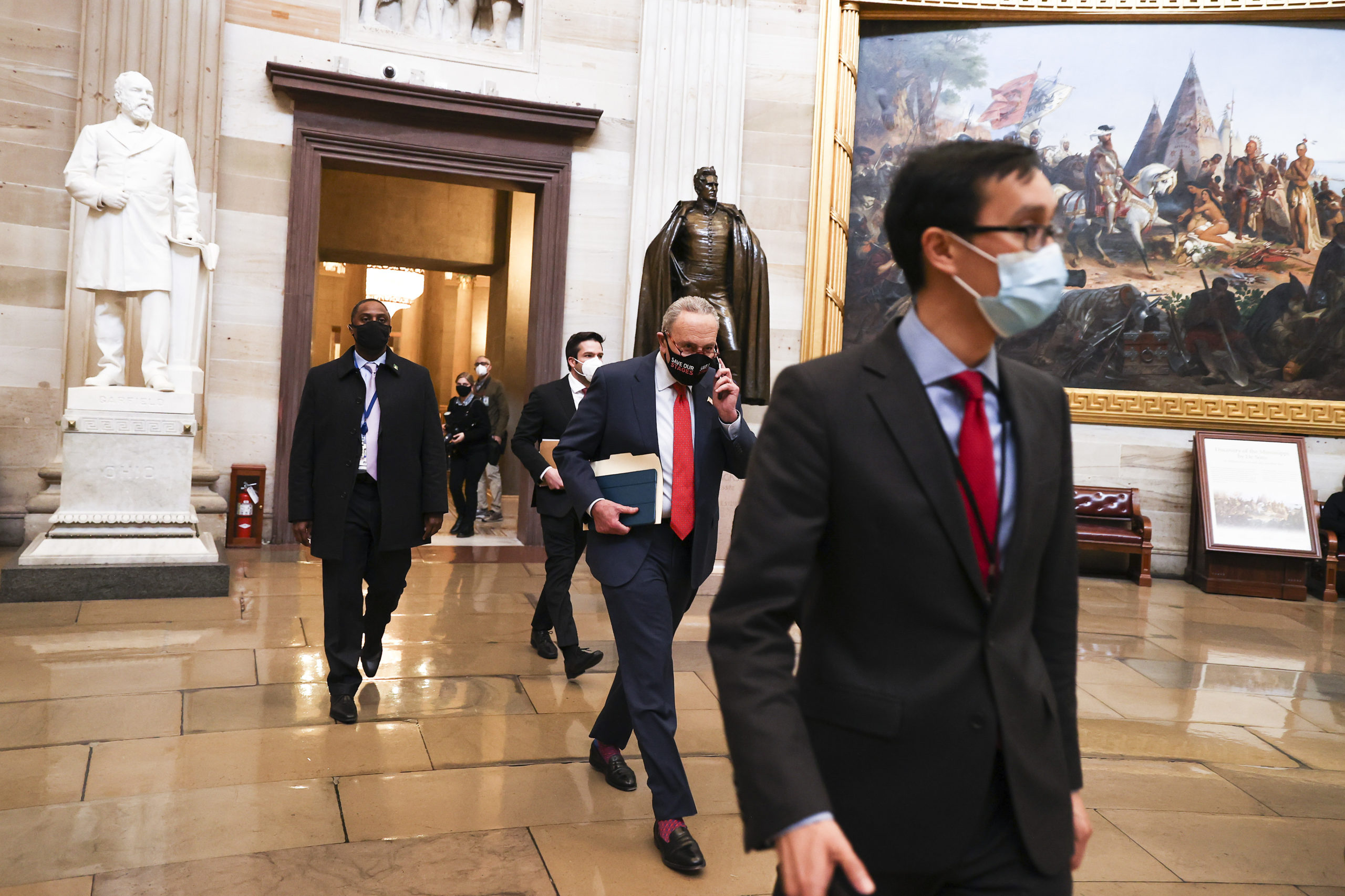 Senate Minority Leader Chuck Schumer heads to the office of Speaker of the House Nancy Pelosi for ongoing talks over the coronavirus stimulus bill on Dec. 15 in Washington, D.C. (Tasos Katopodis/Getty Images)

Whatley, of the National Restaurants Association, echoed Sullivan’s comments: “We’ve really seen exponential growth in terms of the number of folks who’ve been advocating for small businesses, especially in the restaurant industry.”

“And our grassroots presence, as an industry, I would say has always been pretty strong, but it’s gotten even stronger during this crisis,” he added.

The NFIB, a major U.S. small business advocacy group that has defended small businesses in the Supreme Court, didn’t respond to multiple requests for comment.