Social media site Parler announced on Feb. 15 that it would be online again after it was removed from Amazon Web Services.

The site, which bills itself as “the world’s #1 free speech social media platform,” said in a press release that its new online infrastructure is “built on sustainable, independent technology and not reliant on so-called ‘Big Tech’ for its operations.” A message on parler.com, which does not yet appear to be fully operational, reads, “We believe privacy is paramount and free speech essential, especially on social media. Our aim has always been to provide a nonpartisan public square where individuals can enjoy and exercise their rights to both.” 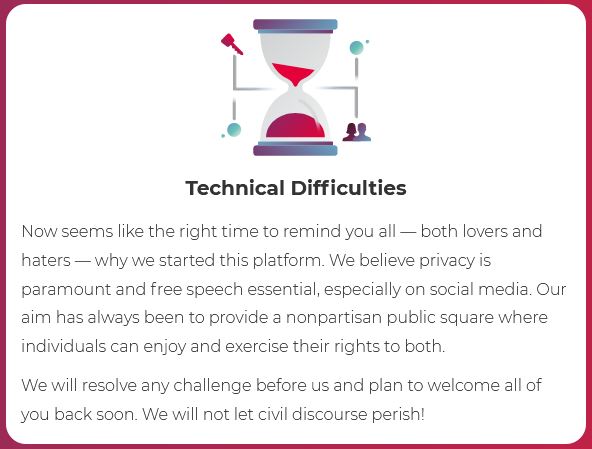 Parler was kicked off of Amazon Web Services on Jan. 10 in the wake of the Capitol Riot. The prevalence of “violent content on your website, all of which violates our terms” was Amazon’s justification for the removal, according to a letter obtained by Buzzfeed. A federal judge denied Parler’s request for a preliminary injunction that would have forced Amazon to platform the site. (RELATED: ‘I Can’t Go Home Tonight’: Parler CEO John Matze Says He’s Getting Death Threats)

Parler’s removal from Amazon Web Services was preceded by its removal from the Apple App and Google Play stores. Both companies argued that Parler was not doing enough to police violent user content. However, a public records analysis by Forbes shows that Facebook, not Parler, was the social media site most used to plan the Capitol Riot.

The relaunched Parler will not immediately be available to new users, the company’s press release said.