As coronavirus continues to affect students by prolonging public school reopenings despite science pointing to little COVID-19 spread in classrooms, many parents have been pulling their kids from the public school system.

Teachers unions across the country have refused to return to school and parents are starting to lose confidence in their public school systems, The Wall Street Journal (WSJ) reported. (RELATED: CDC Issues Official Guidance Stating That Schools Can Safely Reopen)

The Centers For Disease Control And Prevention (CDC) released new guidelines Friday and said that schools can reopen in places where community transmission rates weren’t high. The guidance also said that teachers do not need to be vaccinated in order to return, but said teachers should be a higher priority for vaccinations.

Catholic schools and private schools, on the other hand, have seen an increase in enrollment, according to the WSJ. Many parents have also turned to home-schooling or hiring teachers to instruct small groups or pods of students, according to the Statesman. 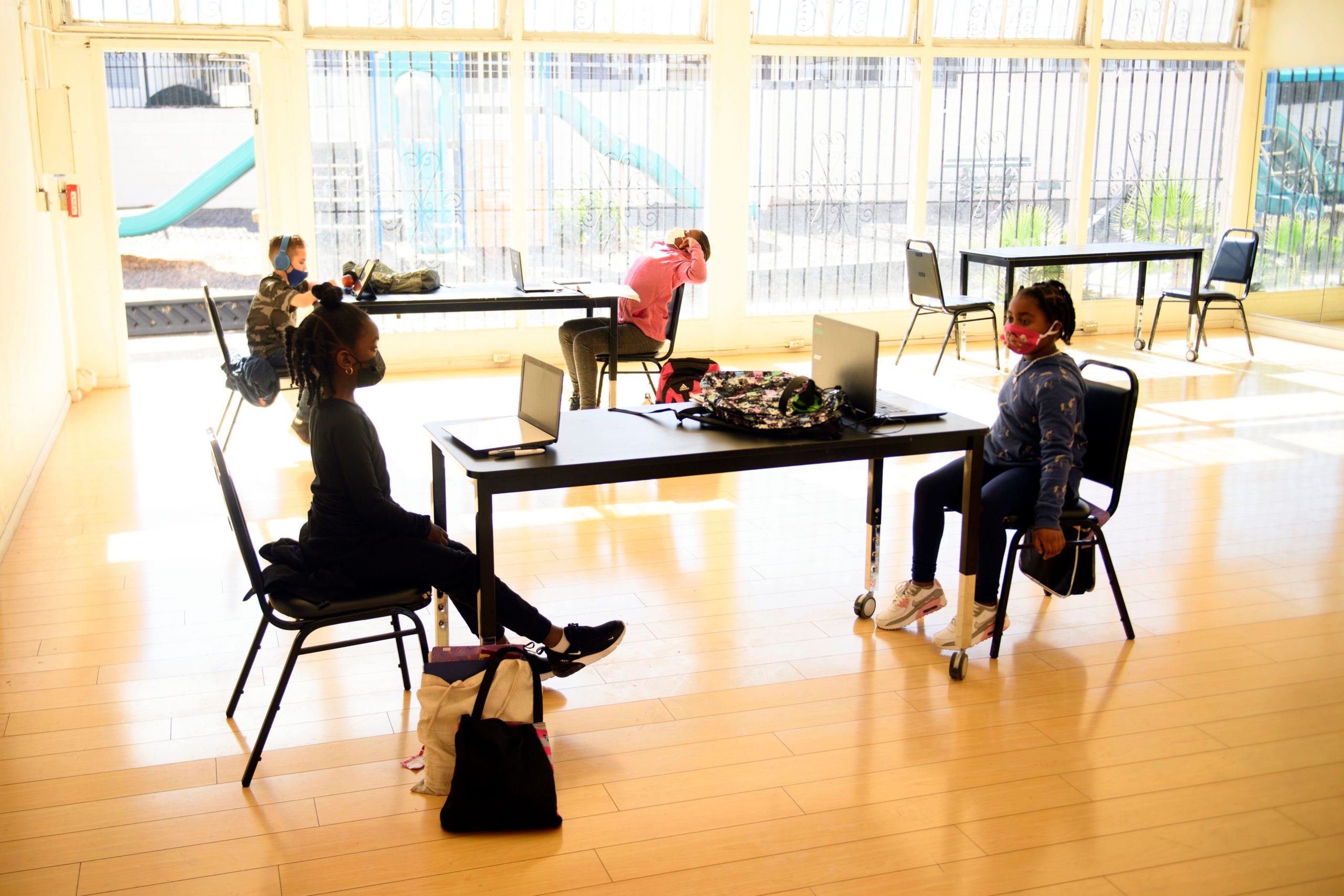 Children attend online classes at a learning hub inside the Crenshaw Family YMCA during the Covid-19 pandemic on Feb. 17, 2021 in Los Angeles, California. (Photo by PATRICK T. FALLON/AFP via Getty Images)

Kristin Blagg, a senior research associated at the Urban Institute, told WUSA 9 that parents are choosing alternatives to virtual learning, such as private schools and homeschooling because some feel they aren’t equipped to help their kids learn virtually.

Sixteen-year-old Ciara Daly, a former resident of Montgomery County, Maryland, reportedly moved to her grandmother’s place in Ireland because in-person schooling had resumed there.

“A whole semester of Zoom, four or five hours in front of your computer a day home alone, it’s just miserable, and I just didn’t want to do that,” Daly told WUSA 9.

Derek Turner, Chief of Engagement, Innovation and Operations at Montgomery County Public Schools, is concerned that this decrease in enrollment could affect funding, according to WUSA9. He also noted that numbers might increase as students start to return to school.

“It would be millions upon millions of dollars for our school system and to serve our students. And if we see that increase in students next year, we won’t have the funding to meet the needs of those new students,” Turner said.

The Prince George County school district in Maryland has seen an enrollment decrease of 1,700 students, WUSA9 reported. Mike Herbstman, the Chief Financial Officer for the district, said that he expects to lose $34.6 million because of the enrollment shortage, according to WUSA9. 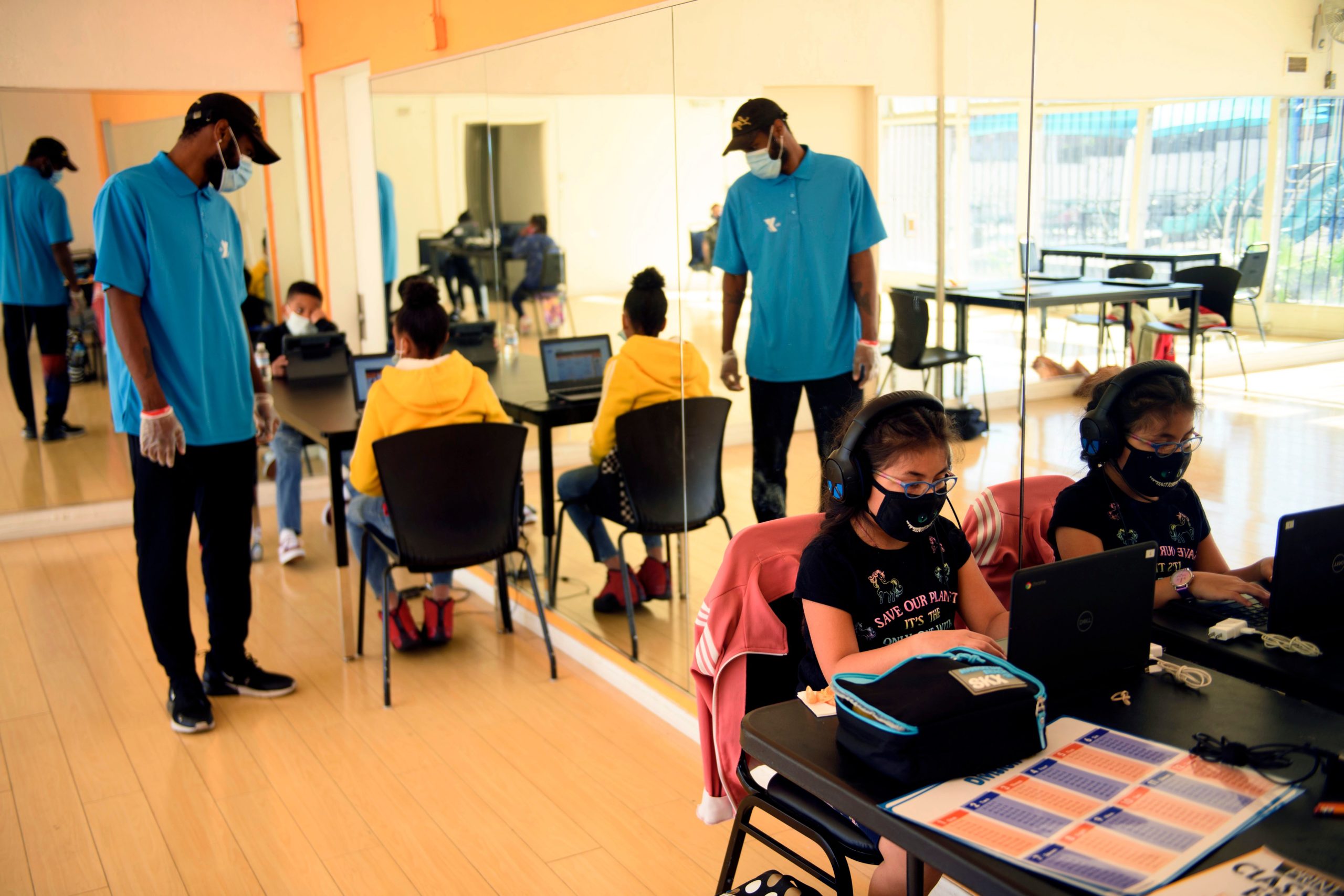 A YMCA staff member assists a child as they attend online classes at a learning hub inside the Crenshaw Family YMCA during the Covid-19 pandemic on Feb. 17, 2021 in Los Angeles, California.  (Photo by PATRICK T. FALLON/AFP via Getty Images)

Austin mother Megan Olshavsky opted to keep her son Jonah in his private Montessori school instead of sending him to kindergarten, the Statesman reported in October.

“We feel good about the decision,” she told the Statesman. “He’s in a place with teachers he knows, where he can interact with other kids and be where he feels comfortable.” She also said that his preschool was less restrictive than kindergarten would have been in terms of masking, and said that they didn’t have plastic barriers up at desks.

Based on surveys from parents, district officials still believe less than half of students will return to the classroom this year.

The Austin district reopened for in-person instruction on Oct. 5, according to the Statesman, but some surrounding districts opened sooner.

Enrollment decline can also affect Texas school systems financially. Officials in Texas may have to resort to cutting staff or other programs if it doesn’t bounce back, according to the Statesman.

Berkley Prep, a private school located in Tampa, has seen a high volume of phone calls from parents interested in enrolling their students, according to Bay 9 News.

“We started hearing from out of state people at a little bit higher rate than we normally would have back in April and May and into the early summer,” Berkley Prep Director of Admissions Jay Lasley told Bay 9 News.

Some parents were looking to move to the area because of their ability to reopen, according to Bay News 9. “They were moving from Connecticut, New York, New Jersey, Washington, D.C., Chicago and major metropolitan areas in the midwest and northeast,” Lasley said.

“Our admission numbers, our application volume is almost double what it normally is or what it was this time last year,” Lasley told the outlet.

The National Association of Schools said, according to Bay News 9, that 58% of its schools are seeing an increase in enrollment interest.

The prevailing science surrounding school openings has been that students should be getting back to the classroom.

The Chicago Teachers Union (CTU) refused to return to school in late January, saying that teachers needed to be vaccinated before resuming in-person schooling. The union then approved a deal on Feb. 10 with the Chicago Public Schools that said they would return to in-person instruction.

“Let me be clear. This plan is not what any of us deserve. Not us. Not our students. Not their families,” CTU President Jesse Sharkey said in a statement. “The fact that CPS could not delay reopening a few short weeks to ramp up vaccinations and preparations in schools is a disgrace.”