A new report released Thursday found that California accounted for more than half of all homeless veterans living on the streets in 2020.

The 2020 Annual Homeless Assessment Report (AHAR), which was released by the U.S. Department of Urban Planning and Development, found that 53% of all unsheltered homeless veterans – a total of 7,996 veterans – in the United States lived in California in 2020. When sheltered veterans staying in emergency shelters, transitional housing programs, or safe havens were included in the total, California accounted for 31% of all homeless veterans in the United States.

Brian O’Callaghan, the Director for At-Risk Veterans at Military Veterans Advocacy, told the Daily Caller that while shelters are usually better than living on the street, it’s not the same as being housed.

“No veteran should ever spend more than one night in a shelter,” O’Callaghan said. “That is plenty of time for the shelter to notify the VA and have someone dispatched to get the veteran into a better housing situation. Anything short of that should be regarded as unacceptable and a failure to keep our collective promise to these men and women.” 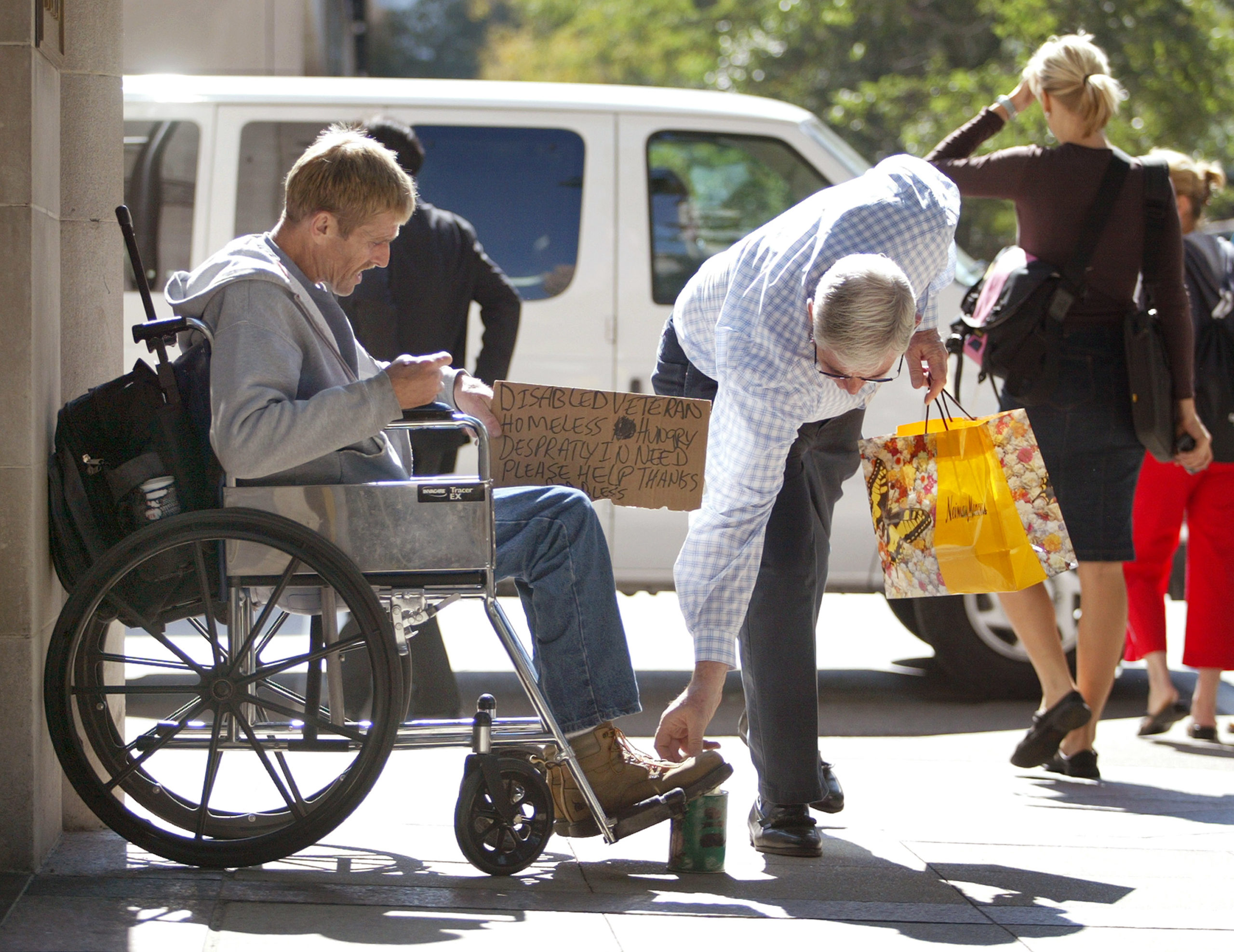 A passerby drops some loose change into the can of a homeless, disabled veteran in his wheelchair looking for money along the shopping area known as the “Magnificent Mile” on Michigan Ave. September 30, 2004 in Chicago. Chicago alderman are looking into an ordinance restricting areas of panhandling in the city. (Photo by Tim Boyle/Getty Images)

Several factors account for the differences in rates of veteran homelessness between states, including weather and laws regarding people who are homeless, O’Callaghan said.

“Veterans, like any other homeless person, will sometimes gravitate to areas where weather is better, where they are more likely to receive help, and where being homeless isn’t criminalized,” he noted.

O’Callaghan said that while it’s great when states work to end veteran homelessness, the burden really falls on the federal government’s Department of Veteran’s Affairs (VA) or Housing and Urban Development (HUD).

“VA and HUD resources will always dwarf anything a state can throw at the problem,” O’Callaghan told the Daily Caller.

“There are some great specific examples of major metropolitan areas working to end veteran homelessness working hand in hand with the VA and HUD,” he continued. “Arlington, Virginia and Houston, Texas are two such examples. These models can be used almost anywhere. What is needed are political will, money, and personnel.”

Overall, the number of homeless veterans had been decreasing since 2017 but rose for the first time from 2019 to 2020, the AHAR report found. Between 2019 and 2020, veteran homelessness decreased in 28 states and rose in 19 states.