The leader of a Loudoun County Public Schools (LCPS) committee allegedly called for the school board to fire teachers and staff who do not support the use of critical race theory (CRT) in the schools’ curriculum and training.

In an email obtained by The Daily Wire, Kiara Jennings, the chairwoman of the Minority Students Achievement Advisory Committee (MSAAC), reportedly said, “I was disheartened to see so much hate and vitriol centered around something that is meant to bring about inclusiveness and equity!”

“While much of the push back came from parents and other community members, from what I understand there was also a great deal of negative feedback from LCPS teachers. That simply cannot and should not be tolerated by anyone employed by LCPS!” she continued, according to The Daily Wire.

“If our teachers and staff cannot be open and willing to learn how to be culturally competent then they do not need to be in the classrooms any longer as they will only hinder the process and most importantly cause irreparable harm to the vulnerable hearts and minds of our students,” she reportedly concluded.

Critical race theory (CRT) holds that America is fundamentally racist, yet it teaches people to view every social interaction and person in terms of race. Its adherents pursue “antiracism” through the end of merit, objective truth and the adoption of race-based policies. 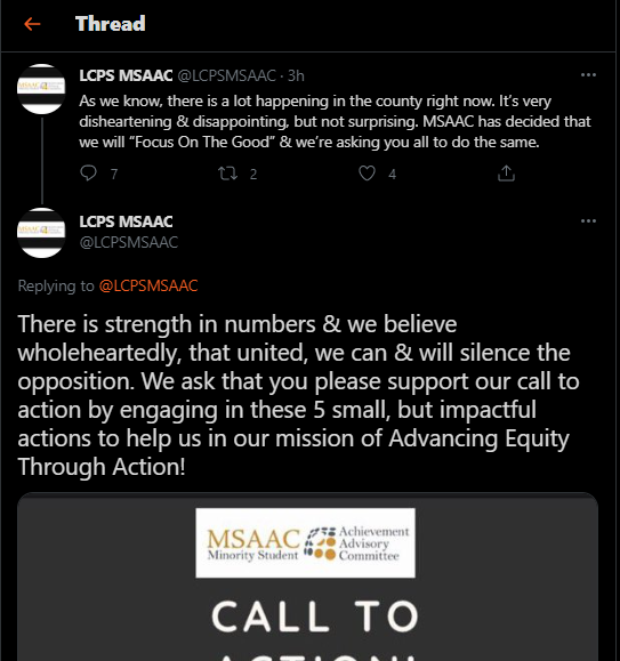 This deleted thread of Tweets posted on March 26 by a Loudoun County Public Schools advisory committee called for “silencing the opposition.”

“Like the proposed teacher conduct policy proposed last fall, this is a blatantly unconstitutional attempt to suppress teachers’ free exercise of expression. The Loudoun County’s teachers and their union should be outraged and asking why LCPS is taking unconstitutional marching orders from a group that is hellbent on ‘silencing the opposition,’” Ian Prior of Loudoun Parents for Education told the Daily Caller when asked for comment on the reported email.

Prior also provided a copy of the draft policy that was scrapped, noting similarities to the proposed policy in the email from Jennings, which appears to contradict the apology issued on Twitter on March 27. The LCPS MSAAC has since deleted its account on the social networking site.

“I disagree wholeheartedly with the sentiment of what Ms. Jennings is expressing in her email,” Monica Gill, a LCPS teacher with 19 years of service in that district who teaches advanced placement government, told the Daily Caller. “It appears that this confirms the radical direction that the county has been moving regarding critical race theory, and this is more and more a one-sided ‘conversation.’ They deny that they are embracing the ideas of critical race theory, yet everything we are doing is centered on all of the buzzwords around critical race theory.”

“Critical race theory is a Marxist ideology, and the move to silence the opposition is because Marxist ideas cannot rise on their own merits in the marketplace of ideas, other ideas have to be crushed,” Gill said.

“The Loudoun County Public School system continues to demonstrate lawless behavior and open defiance of constitutional rights,” David Gordon of the Virginia Project said. “Loudoun must squarely face that its school system has been taken over by a radical Marxists cult – the time has come to clean house before LCPS’ liability compounds further.”

“We continue to hold out hope that a responsible party in LCPS’ legal department or risk management will step in and correct the situation before corrections are ordered by the courts; but that hope wanes with each day this open extremism continues unabated,” Gordon added.

LCPS MSAAC posted a call for action that said opposition “can and will be silenced” on social media accounts in mid-March. (RELATED: ‘That Student Deserves A Medal’: Leaked Video Shows Teacher Infuriated Student Won’t Point Out ‘Racial Differences’ Between Two Women)

The posts were later deleted with an apology that was rejected by groups organizing a recall campaign after the existence of a secret Facebook group targeting opponents of the use of critical race theory in schools came to light.

The Daily Caller reached out to a member of the Loudoun County School Board for comment but did not receive a reply before publication.