The 25-year-old man who allegedly killed a Capitol police officer on Friday was a supporter of the Nation of Islam, the extremist group led by Louis Farrakhan, according to NBC News.

Noah Green was fatally shot after ramming his vehicle through a checkpoint at the Capitol, the network reported. He hit two officers, killing one, 18-year Capitol police veteran William “Billy” Evans.

Green was shot after exiting his vehicle with a knife and lunging at officers, a spokesperson for Metropolitan police said at a press conference.

NBC News first reported that Green, an Indiana native, was a supporter of the Nation of Islam. The network cited federal law enforcement officials familiar with the attack.

Green’s Facebook page, which was taken offline after the Capitol attack, showed multiple posts about the Nation of Islam and Farrakhan. In a post on March 17, Green, who described himself as a “Follower of Farrakhan,” said that he has faced personal struggles in recent years and also recently lost his job. (RELATED: Farrakhan Calls The Coronavirus Vaccine A ‘Vial Of Death’)

He also said that he hoped one day to meet the Nation of Islam leader.

“I am currently now unemployed after I left my job partly due to afflictions, but ultimately, in search of a spiritual journey.”

Of Farrakhan, Green wrote that he “has done miraculous work not just with me, but with the lives of millions.”

“A major goal of mine is to meet this man who has been instrumental on my awakening and life’s work. I am unsure if I’ll ever be afforded that opportunity, but I wanted to write this note for two purposes: to give everyone an update, and in hopes that the note may somehow reach the Minister.”

MORE: The suspect is a follower of the Nation of Islam, law enforcement officials say. Recent social media posts indicate he was unemployed and dealing with several personal issues.

Green also posted a certificate from the Nation of Islam affiliate in Norfolk, Va. which referred to him as Noah X. 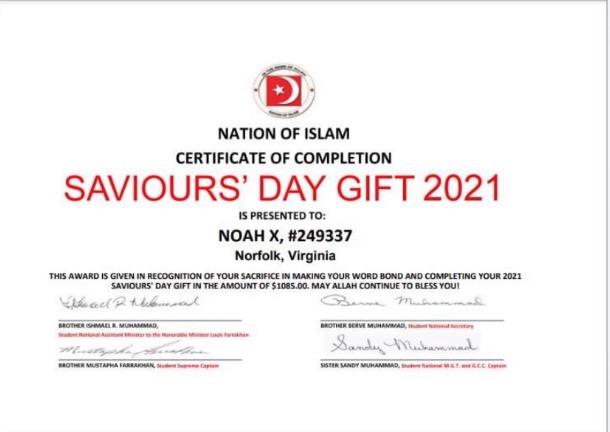 Farrakhan has a history of making anti-semitic and anti-white remarks, while promoting various conspiracy theories about the U.S. government.

Farrakhan has recently pushed conspiracy theories about the coronavirus vaccine. At a Nation of Islam event in February, he called the vaccine a “vial of death.” He chastised black celebrities who have promoting taking the vaccine, saying they had aided in “the destruction of your people.”