A parents group seeking to recall multiple members of the Loudoun County school board released new screenshots and video that they say back their complaints critical race theory is being used in the curricula of Loudoun County Public Schools (LCPS) despite denials from the school system.

In a press release, Loudoun Parents for Education (LPE) cited multiple reports surrounding the controversy, including calls to silence opponents, the creation of target lists in a secret Facebook group, and calls to fire teachers who oppose the use of critical race theory, even in private conversations.

Critical Race Theory (CRT) holds that America is fundamentally racist, yet it teaches people to view every social interaction and person in terms of race. Its adherents pursue “antiracism” through the end of merit, objective truth and the adoption of race-based policies.

“Either LCPS is blatantly lying, or they do not understand critical race theory. Amazingly, one of LCPS’s own recommended authors to help with its ‘culturally responsive learning’ – Ibram Kendi – is considered the pre-eminent peddler of critical race theory,” LPE said in the release after noting LCPS denied using CRT in its curricula.

An August 2020 action plan by LCPS obtained by the Daily Caller confirms that Kendi’s book was recommended.

However, Byard disputed that Interim Superintendent Dr. Scott Ziegler had denied that CRT was in LCPS materials, and said that CRT has been presented to students as one of several critical theories to consider.

“Interim Superintendent Dr. Scott Ziegler has never denied that Critical Race Theory is discussed at LCPS. What he has stated is that students and staff are not indoctrinated into any school of thought or philosophy,” Byard told the Daily Caller. “In the Interim Superintendent’s Update: Rumors Concerning LCPS Equity Work, he clearly states:  It should be noted that students do not receive equity training. LCPS has not adopted a uniform equity curriculum, but does have a Culturally Responsive Framework.”

Ian Prior, a leader of LPE, told the Daily Caller that the newly released photos were obtained from parents and a video was provided by staff from LCPS. (RELATED: ‘An Open Conspiracy’: GoFundMe Terminates Fundraiser For Unwoke Parents Targeted By Loudoun County Schools)

Images that LPE claims were shown in high school lessons introduce the concepts of “white fragility,” “white privilege,” and one slide in particular cites CRT explicitly in discussing white supremacy.

“This slide comes from a college-level English class where students are participating in a discussion of various theories and how they are used to critique literature,” Byard told the Daily Caller. “Among the theories being discussed in this class were critical race theory, structuralism, deconstructionism and feminism.”

In a video obtained by the Daily Caller, a teacher scolded a student for not mentioning the race of two women in a photo. The image was apparently cropped from one that ran with a London Daily Mail article about fraternal twin sisters.

“Since all of this began coming to light in a national way, we have received outreach and materials from several parents. There has been an amazing response from parents who are appalled at the thought that their children are being taught to end discrimination by discriminating,” Prior told the Daily Caller. 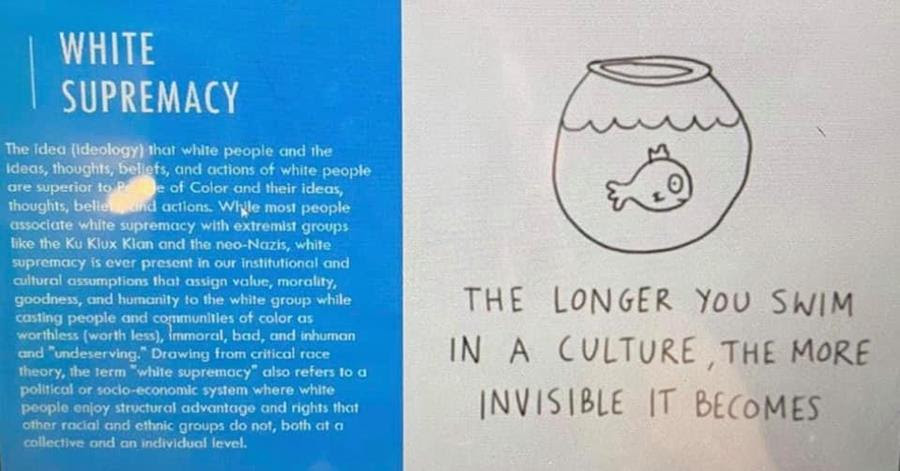 Critical race theory (CRT) is cited in a definition of “white supremacy.” (Provided by Loudoun Parents For Education)

“What is absolutely amazing, is PACT continues to find and provide real examples of Loudoun County Public Schools actively teaching, training, and promoting CRT in the classroom and across the school system.  Yet, LCPS continues to lie every step of the way and say ‘Nope, no CRT here’.  They even have a detailed plan for the future of CRT in LCPS (What Does the Future Hold for LCPS), which includes a program called “Parent Equity Academy (PEA)” targeted for a June 2021 launch,” Scott Mineo of Parents Against Critical Theory (PACT) said.

“They continually lie that CRT is in LCPS but we prove them wrong all the time, using LCPS information,” Mineo added.

Editor’s Note: This article has been updated to include and reflect statements provided to the Daily Caller by Loudoun County Public Schools.