Hamas is a Sunni Islamist and Palestinian nationalist terror group that rules Gaza and has a noteworthy presence in the West Bank. Hamas has been growing in popularity in the West Bank, where its rival Fatah dominates. Its armed wing, the Izz ad-Din al-Qassam Brigades, recently fought along with other Palestinian terrorist groups in the two-week war with Israel, which began on May 10.

Even in times of relative peace, the group is generally known for carrying out terror attacks and inciting violence against Israelis.

The video released Thursday is set at night in what appears to be one of the hilly areas of the West Bank. Two animated boys — a short, chubby one wearing a red shirt and blue jeans, and a thin, tall one wearing a light blue top and blue jeans — stage menace and attacks against Israelis, and then laugh about it. (RELATED: ‘The Hamas Caucus’: Republicans Launch Explosive Term For Ocasio-Cortez ‘Squad’)

In one scene, the boys get Molotov cocktails ready for an attack and set up wooden planks studded with nails on the road to puncture the tires of incoming Israeli vehicles.

After a brief interlude, the short film shows the boy in blue looking ahead with binoculars as an Israeli military jeep arrives along with a pick-up truck carrying electricians. The wooden planks with nails attached puncture their tires, forcing them to stop.

As soon as the soldiers within the jeep get out to check what happened, the chubby youth, shouts “Allah is the greatest.” The boys collectively hurl Molotov cocktails towards the jeep, setting it aflame. Finally, all the soldiers get out as a cloud covers the moon. The screen then blacks out as the words “the resistance is will and innovation” appears on-screen. 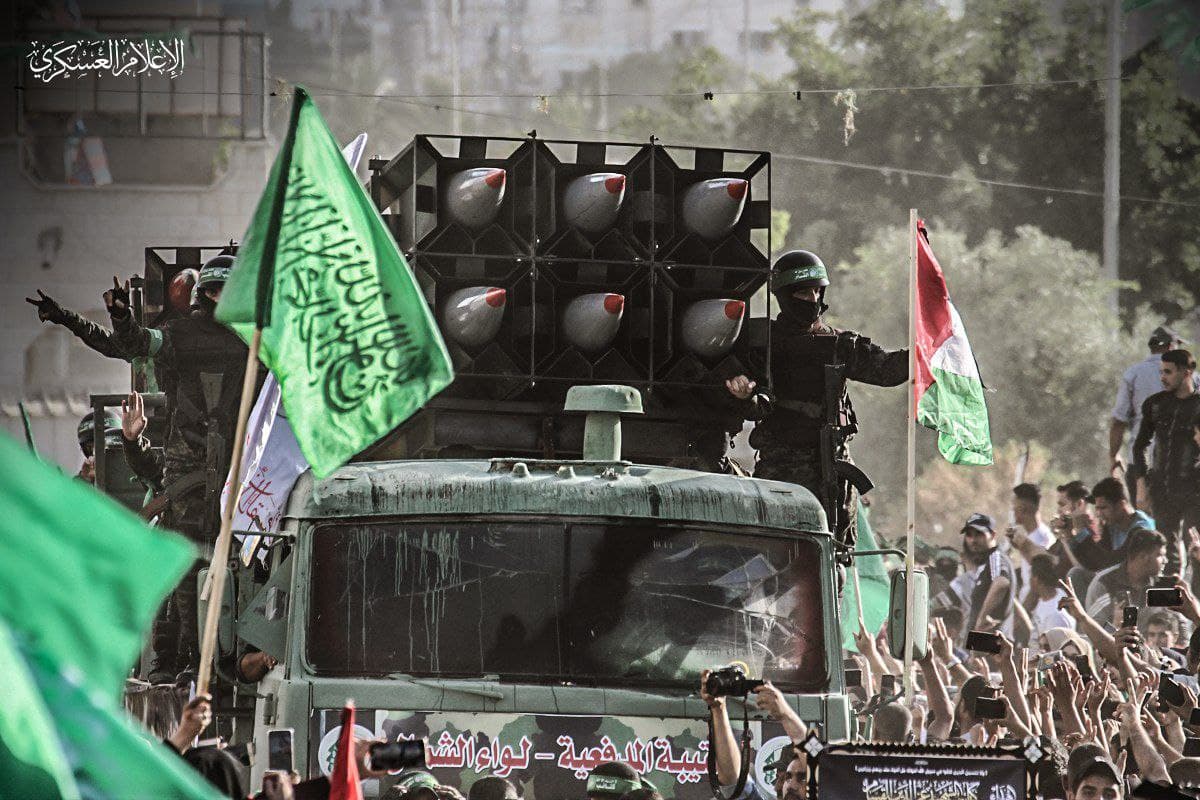 Picture released by Hamas showing its militants on a vehicle in a parade in Gaza following the end of a two-week war with Israel in May (Photo: Hamas/Press Release via Telegram)

Hamas has held terrorist training summer camps for children in the past, as reported by Times of Israel, where young Palestinians were taught how to carry out kidnappings of Israeli soldiers, use firearms, and infiltrate Israel through underground tunnels the terror group digs.

According to the Times of Israel, such camps occur every year and aim to prepare the next generation of Palestinian youth for conflict with Israel. 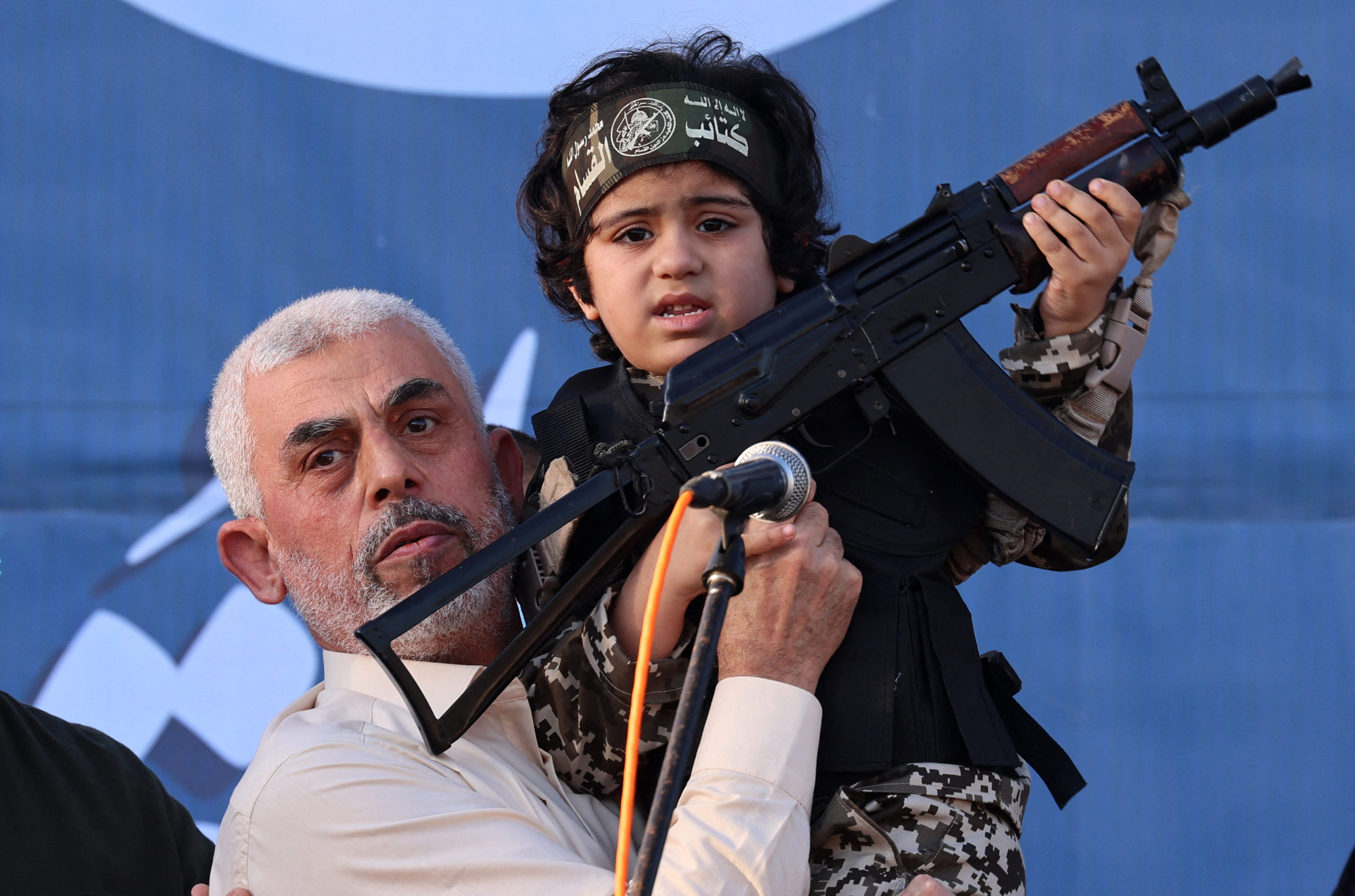 Hamas leader Yahya Sinwar holds the child of an Al-Qassam Brigades fighter, killed in the recent fighting with Israel during a rally in Gaza City on May 24, 2021. (Photo by EMMANUEL DUNAND/AFP via Getty Images)

Besides the summer camps, the group features children and teens dressed in military gear and carrying toy weapons as part of its propaganda. The group also incites minors and promotes the admiration of militants through means accessible to them, notably cartoons and T.V. shows. Such use of cartoons by the group goes as far back as the Bush era.

Videos below from organizations such as the Palestinian Media Watch and Middle East Media Research Institute —and verified by Daily Caller for the translation’s accuracy — show incitement catered for children in Hamas’ affiliate networks and other media organizations in the Arab world.

While Palestinian protestors and Israeli security forces clashed across the West Bank and Jerusalem during the riots over Sheikh Jarrah, Hamas shared a cartoon encouraging young Palestinians to commit violence against Jews on Telegram.

The incitement video shows a young Palestinian boy scouting a mall for a terror attack. The boy snaps a picture of the security in order to plan a similar disguise.

After purchasing similar clothing, he heads to his house on the Palestinian side of Israel’s protection barrier erected in the West Bank. Inside his house, a painting of the Al Aqsa Mosque is prominently displayed.

Then, he kisses the Quran and heads out for the terror mission.

The disguised Palestinian youth grabs the security officer’s firearm and shoots him in the head. The youth then carries out a mass shooting inside the mall.

The video ends with the words “the non-stop resistance continues.”

One of the earliest well-known uses of cartoons for terrorist propaganda by Hamas was the show “Ruwād al-Ghad,” or “Pioneers of Tomorrow,” which was broadcasted from April 13, 2007, to October 16, 2009, on Hamas-affiliate Al Aqsa TV.

The show, on-air during the twilight years of the Bush administration and the first year of the Obama administration, was known for its Mickey Mouse character, Farfour, who preaches Islamic domination, anti-Semitism, anti-Americanism, and “resistance”— a euphemism for terrorist acts.

“There is nothing comic about inciting young generations of Palestinians to hate Israelis,” an Israeli official told The Associated Press while the show was on-air, according to a 2007 Der Spiegel report.

Shortly after the Der Spiegel covered the story, then Palestinian Information Minister Mustafa Barghouti announced that al-Aqsa TV pulled the show “Ruwād al-Ghad” for “review” in compliance with a government order, adding that using cartoons to incite Palestinian children to fight Israel and strive for global Islamic domination was a “mistaken approach,” Der Spiegel reported.