The Biden administration launched an effort Friday to bring back home many veterans that have been previously deported, according to a press release.

The initiative unveiled Friday will see the Department of Homeland Security (DHS) team up with the Department of Veterans Affairs to find and relocate back to the U.S. service members, veterans and family members of those who have previously served in the U.S. military, according to a press release.

“The Department of Homeland Security recognizes the profound commitment and sacrifice that service members and their families have made to the United States of America,” DHS Secretary Alejandro Mayorkas said in a statement. “Together with our partner the Department of Veterans Affairs, we are committed to bringing back military service members, veterans, and their immediate family members who were unjustly removed and ensuring they receive the benefits to which they may be entitled,” Mayorkas added.

He also directed the U.S. Citizenship and Immigration Services, the primary agency that deals with immigration benefits to non-citizens, Immigration and Customs Enforcement and Customs and Border Protection to conduct a review of its policies, practices and cases of “individuals whose removals failed to live up to our highest values.”

Veteran Affairs will help ensure that veterans receive all their VA benefits they might be entitled to based on their previous service and that all veterans, including their families, are up-to-date with their vaccinations.

“It’s our responsibility to serve all veterans as well as they have served us – no matter who they are, where they are from, or the status of their citizenship. Keeping that promise means ensuring that noncitizen service members, veterans, and their families are guaranteed a place in the country they swore an oath – and in many cases fought – to defend. We at VA are proud to work alongside DHS as to make that happen,” VA Secretary Dennis McDonough said. 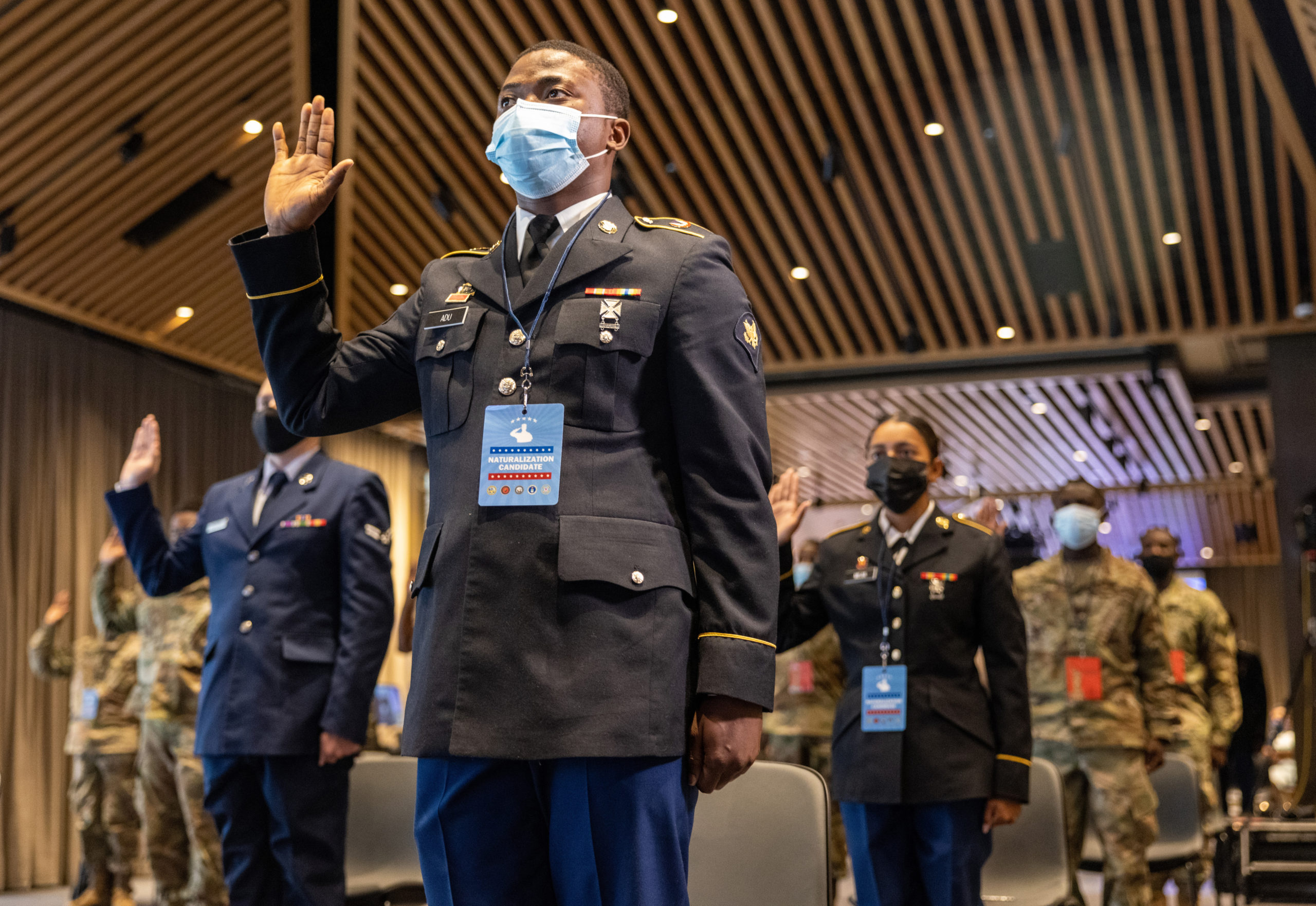 U.S. Army Spc. Dan Adu from Ghana takes the oath of allegiance to the United States to become an American citizen on July 02, 2021 in New York City.(Photo by John Moore/Getty Images)

DHS will also establish a toll-free hotline, known as the Military Resource Center, to help veterans and families with immigration applications and documents, The Washington Post reported.

Democratic Rep. Vicente Gonzalez from Texas applauded the administration’s decision saying in a statement: “It’s our responsibility to provide our service members and their families a pathway to citizenship and it’s clear we’ve failed them in this regard. While this is an important step, we need to codify this initiative with bipartisan legislation, like the Repatriate Our Patriots Act, to ensure no administration can deport our honorable veterans in the future.”

This comes as a part of a wider effort by the White House to review individuals previously deported by the Trump administration and bring some of them back into the United States. (RELATED: ANALYSIS: Biden Is Planning To Invite Back Immigrants Trump Deported)

During HIS 2020 campaign, Biden pledged to stop the practice of deporting veterans.

Veterans are usually deported because they committed crimes, according to The Washington Post, though several have clean records.