Florida Democrats are concerned President Joe Biden won’t capitalize on the uprisings in Cuba and waste what they see as a “golden opportunity” to bring democracy to the country, Politico reported.

“This is a ‘Mr. Gorbachev, tear down this wall!’ opportunity,” state Sen. Annette Taddeo, who represents a district in Miami that went to former President Donald Trump in 2020, told Politico. “We need to be the beacon of hope. There are people in Cuba protesting waving the American flag. That has never happened. We need to understand the moment we’re living in.”

The Democrats fear Biden will be too slow in his messaging or not be bold enough in his denouncements of the Cuban dictatorship, according to Politico.

“There’s a concern by some in the party that if we condemn what happens in Cuba that we’re somehow making a moral judgment on the most progressive elements of our party who have described themselves as Democratic socialists,” Javier Fernandez, a former Democratic state representative and descendent of Cuban exiles, told Politico. “It’s a false equivalence that only hurts Democrats here in the U.S. and in South Florida, in particular.”

Biden called out the “decades of repression and economic suffering to which they have been subjected by Cuba’s authoritarian regime,” in a statement Monday, but many in his administration and party failed to explicitly call out the government as authoritarian, Politico reported.

One State Department official attributed the protests to “concern about rising COVID cases/deaths & medicine shortage,” while Rep. Gregory Meeks of New York, Chairman of the House Foreign Affairs Committee, cited “profound hardship because of the health and economic impacts of COVID-19.” 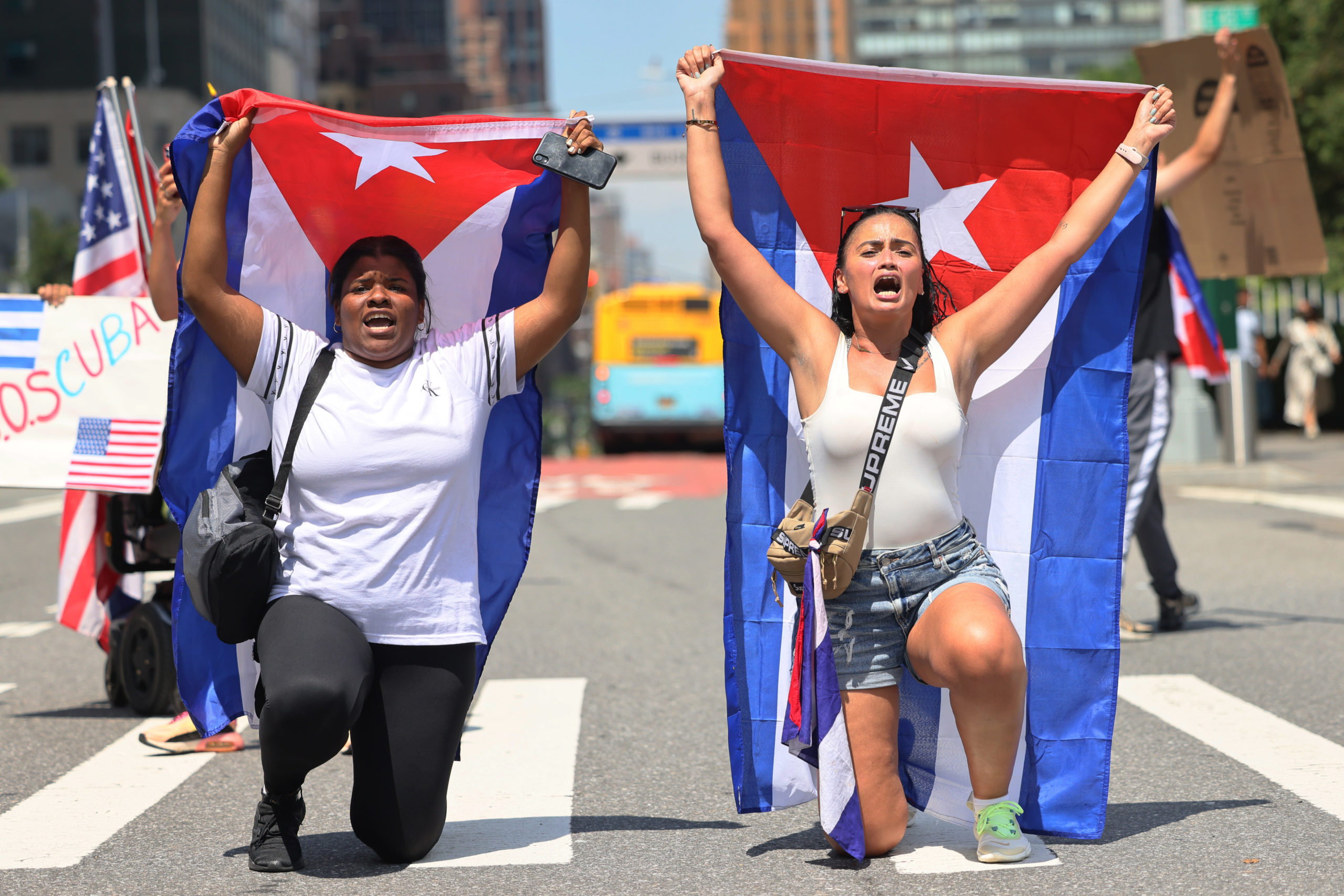 People gather calling for help for Cuban protestors on the island in front of the United Nations on July 14, 2021 in New York City. (Photo by Michael M. Santiago/Getty Images)

Biden only won Miami-Dade by 7 points, while Hillary Clinton captured the previously solid-blue district by 29 points. Now, Florida Democrats fear Biden is writing off the state due to the gains the GOP has made there, Politico reported.

Biden’s announcement that the U.S. would grant temporary protected immigration status (TPS) to Venezuelans who fled the Maduro regime, which the Cuban government is allied with, didn’t come with a public rally or media blitz in Florida.

“I don’t know why I had to find out about Venezuelan TPS from the news media,” Taddeo told Politico. Miami Democrats also felt Biden failed to capitalize on his announcement to grant TPS to Haitians in May, Politico reported. (RELATED: Cuban Police Ramp Up Presence On Streets Amid Historic Protests, Hundreds Arrested And Missing)

Fernand Amandi, a Florida Democratic pollster, who is also the son of Cuban exiles, said the protests were a “golden opportunity” for both the U.S. and Cuba, and that it was necessary for the president to travel to Miami and speak to clear policy that supports the Cuban people and puts non-military pressure on the regime, Politico reported.

“What happened this past weekend is what 12 previous U.S. presidents were waiting for: the uprising of the Cuban people themselves as they stand up against their communist overlords,” Amandi told Politico.