President Joe Biden ordered his staff to consult prominent conspiracy theorist and Harvard professor Laurence Tribe on whether it was legal for the administration to impose its eviction moratorium Tuesday.

Biden’s White House had resisted calls to extend the Centers for Disease Control and Prevention’s (CDC) existing eviction moratorium for more than a week, citing a U.S. Supreme Court ruling saying such a move would require legislation from Congress.

Biden at the time accepted the view of White House attorney Dana Remus that the administration could neither extend the existing moratorium nor create a new, more targeted moratorium. Nevertheless, Biden then directed White House Chief-of-Staff Ron Klain to consult Tribe, a conspiracy theorist who believed the administration could move forward, according to The Washington Post. (RELATED: Majority Of Democrats Believe A Straight-Up Conspiracy Theory)

Biden had accepted the view of chief WH attorney Dana Remus that the eviction moratorium could not be extended.

As the furor built, and under pressure from Pelosi and Cori Bush, Biden told his Chief of Staff to seek out guidance of Harvard’s Laurence Tribe – who said it could

Biden ultimately decided to move forward with a targeted eviction moratorium out of the CDC on Tuesday, which applies only to areas with “heightened” levels of COVID-19 transmission through October 3.

Tribe is a Harvard Law professor who has repeatedly spread conspiracy theories in recent years. He amplified the false conspiracy that former President Donald Trump had worked with Saudi Arabian Prince Mohammed bin Salman to leak news of then-Amazon CEO Jeff Bezos’ extramarital affair to the National Enquirer in 2019. 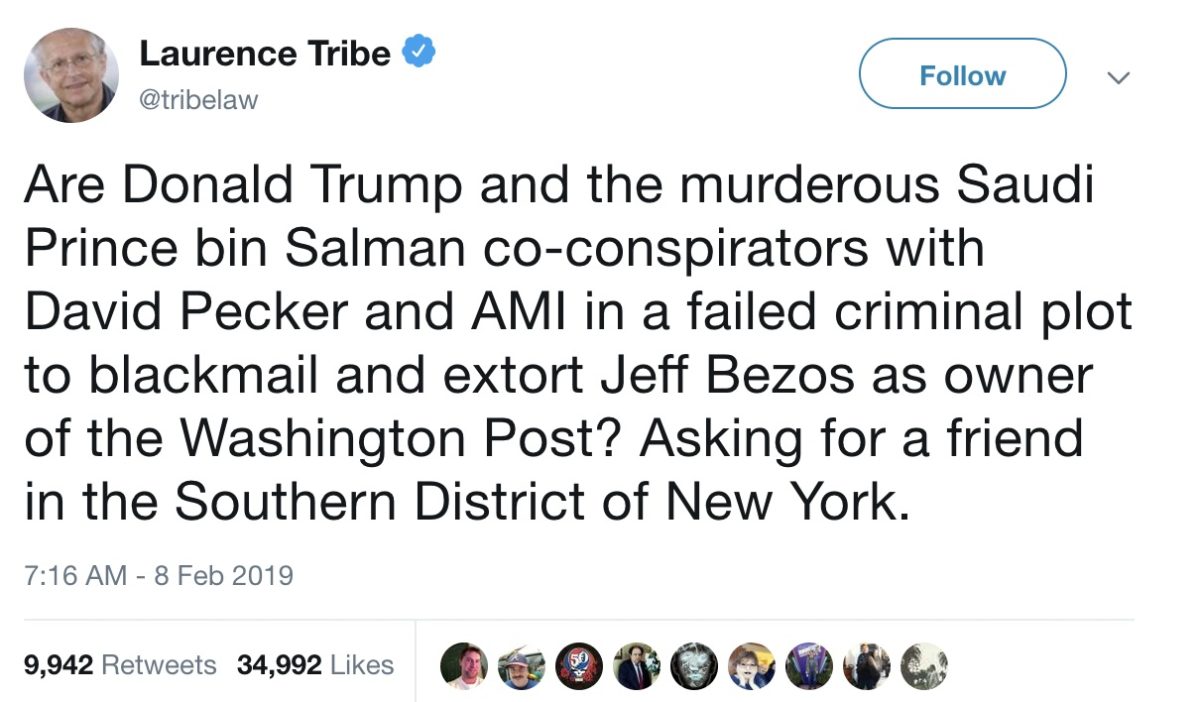 Tribe peddled another conspiracy in 2018 by implying that a Russian plane crash was in fact an attempt to cover up alleged Trump-Russia collusion.

“Among those killed in the tragic plane crash yesterday: Sergei Millian, a Papadopoulis [sic] friend who had emailed Kushner and is said to be behind one of the most salacious claims in the dossier on Trump’s involvement with Russia. Probably just coincidence,” he tweeted at the time.

Millian was not, in fact, on the plane.

Prior to the reported consultation with Tribe, Biden and other White House officials were adamant that they did not have the authority to impose an eviction moratorium.

“Given the recent spread of the delta variant, including among those American’s both most likely to face evictions and lacking vaccinations, President Biden would have strongly supported a decision by the CDC to further extend this eviction moratorium,” Psaki said July 29. “Unfortunately, the Supreme Court has made clear that this option is no longer available.”

Advisor to the President Gene Sperling echoed the same sentiment on Monday, one day before the new moratorium went into effect.

“I would say that on this particular issue, the President has not only kicked the tires; he has double, triple, quadruple checked.  He has asked the CDC to look at whether you could even do targeted eviction moratorium — that just went to the counties that have higher rates — and they, as well, have been unable to find the legal authority for even new, targeted eviction moratoriums,” he said.