Bush was in St. Louis in April touring the jails throughout the city. News 4 reviewed surveillance video from those tours and found she had two security guards with her at the time. Those two private security guards ended up being St. Louis City sheriff deputies Tylance Jackson and Maurice Thompson, according to the outlet. (RELATED: Rep. Cori Bush, Who Wants To Defund The Police, Spent Just Under $70,000 On Private Security)

St. Louis Sheriff Vernon Betts was also present and told News 4 that he was shocked to see the two men that work for him, working as private security for Bush, mentioning that the two did not have the proper approval to work another shift as security guards. Betts told the outlet that he had warned the two men before, but they had not listened. The two ended up being fired after violating the rule multiple times.

“I do feel that the hand that was dealt to us was unfair and unjust,” Jackson told News 4. “You let us go, but you still have a plethora of individuals doing that but you don’t say anything.” (RELATED: Cori Bush Says She Will Pay Private Security, But ‘Defunding The Police Has To Happen’) 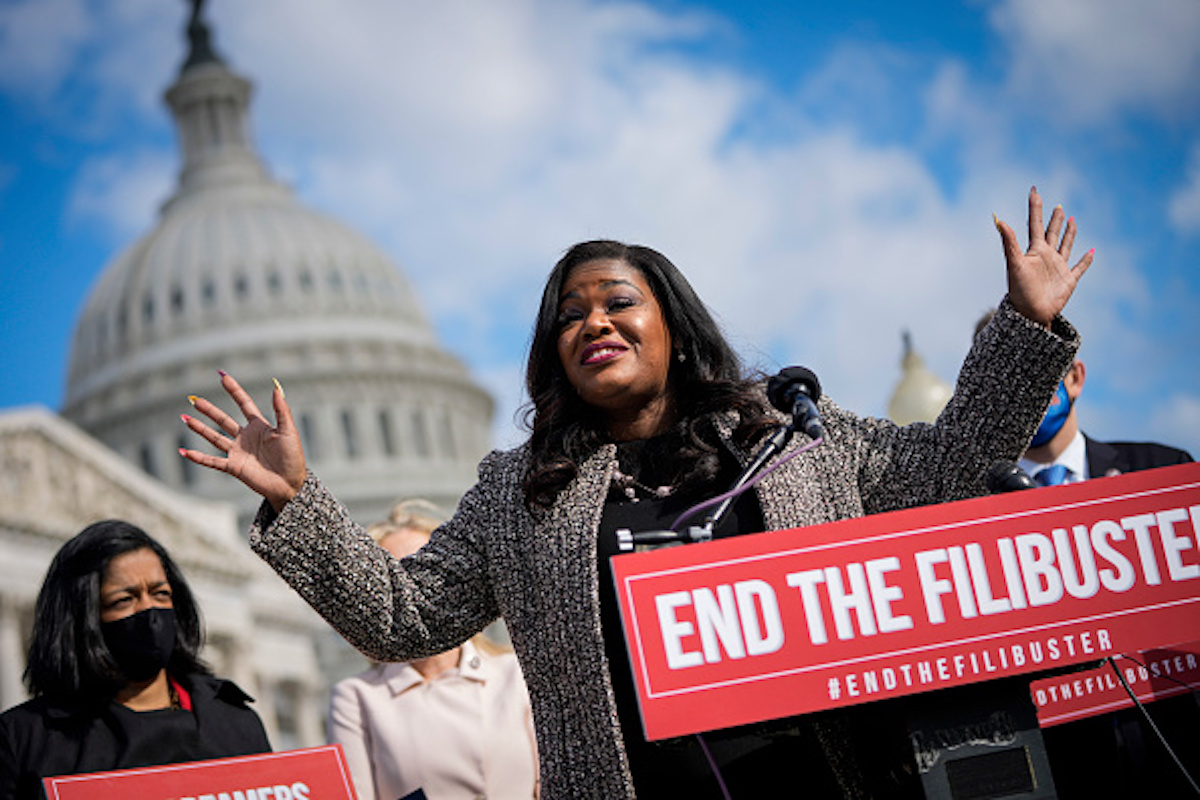 Rep. Cori Bush (D-MO) speaks during a news conference to advocate for ending the Senate filibuster, outside the U.S. Capitol on April 22, 2021 in Washington, DC. (Photo by Drew Angerer/Getty Images)

Bush said in August she needs private security because of a “racist narrative” driven by Republicans, but that politicians should “suck it up because defunding the police has to happen.” (RELATED: ‘His Time Will Come’ — Rep. Cori Bush Goes Off Over Pardon Of Mark McCloskey)

“Either I spend $70,000 on private security over the last few months and I’m here standing now, able to speak, able to help save 11 million people from being evicted, or I could possibly have a death attempt on my life. And we’re also talking about the same exact people who say horrible things about me, who lie to build up their base, and then because they lie about me, I receive death threats,” she added.

The Daily Caller first reported in April that Bush and members of the progressive-Democrat group in Congress called “the Squad” spent thousands of campaign funds on private security. (RELATED: ‘The Squad’ Pushes To ‘Defund The Police’ While Spending Thousands On Private Security To Protect Themselves)

The Daily Caller reported in June that Bush also spent taxpayer funds on a day of private security for herself between Jan. 1 to March 31, after reviewing Statement of Disbursements of the House records.

The Daily Caller contacted Bush’s office about the firing of the two sheriff deputies, to which they did not immediately respond.