A group of Republican senators led by Iowa’s Joni Ernst wrote Secretary of State Antony Blinken on Wednesday demanding the Biden administration designate the Taliban as a terrorist organization.

According to the letter, the Taliban meets the three requirements under the Immigration and Nationality Act to be considered a terrorist organization. It points to the Taliban’s conduct since re-taking power in Afghanistan as justification for the designation, including the appointment of U.S.-designated terrorist Sirajuddin Haqqani as the interim government’s interior minister. 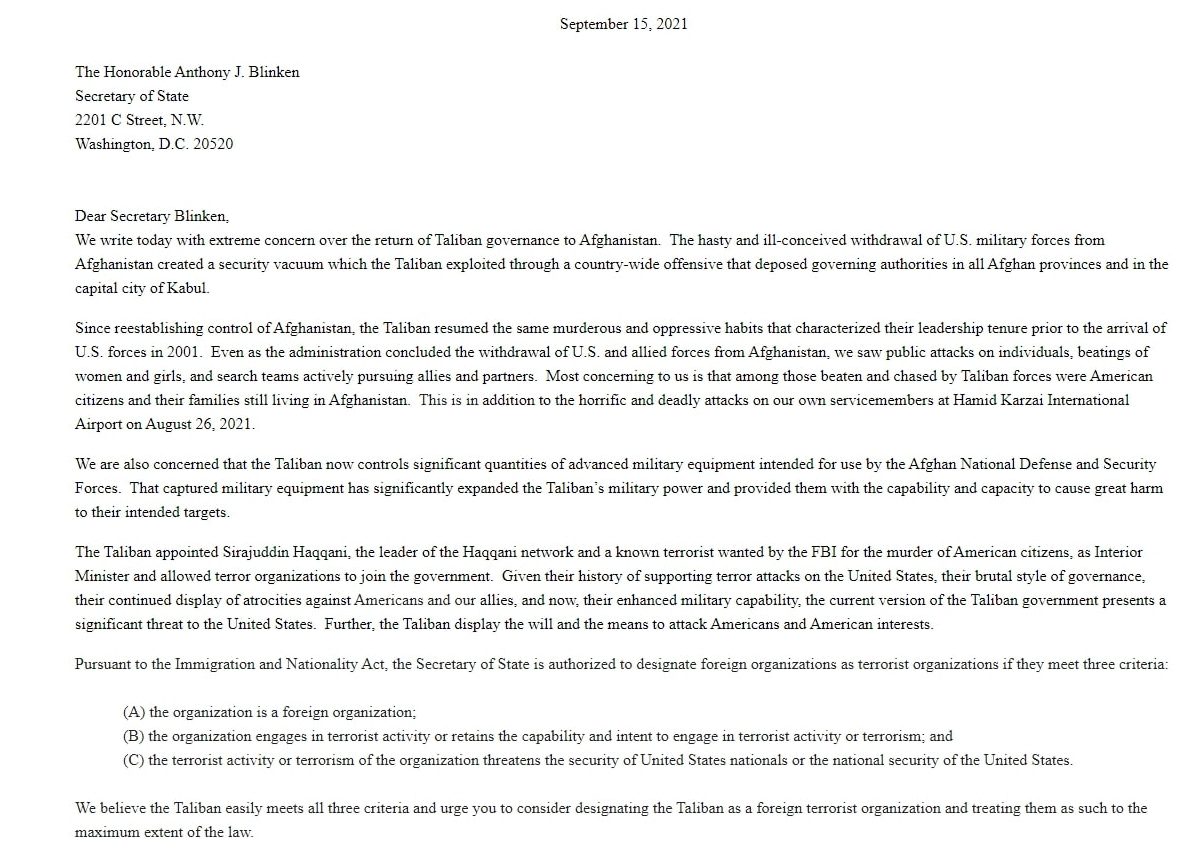 Letter from GOP Senators to Antony Blinken demanding he designate the Taliban as a terrorist organization. (Screenshot/Sen. Joni Ernst)

“Since reestablishing control of Afghanistan, the Taliban resumed the same murderous and oppressive habits that characterized their leadership tenure prior to the arrival of U.S. forces in 2001,” the letter reads. “Even as the administration concluded the withdrawal of U.S. and allied forces from Afghanistan, we saw public attacks on individuals, beatings of women and girls, and search teams actively pursuing allies and partners. Most concerning to us is that among those beaten and chased by Taliban forces were American citizens and their families still living in Afghanistan.”

Democratic chairman of Senate Foreign Relations Committee: “There is no such thing as a reformed Taliban,” Sen. Menendez says in opening remarks ahead of testimony by Secretary of State Anthony Blinken

Ernst was joined in signing the letter by Florida Sen. Rick Scott, Alaska Sen. Dan Sullivan and Alabama Sen. Tommy Tuberville. (RELATED: How A US Ally Helped Build The Taliban Into The Rulers Of Afghanistan)

“We are also concerned that the Taliban now controls significant quantities of advanced military equipment intended for use by the Afghan National Defense and Security Forces,” the letter continues. “That captured military equipment has significantly expanded the Taliban’s military power and provided them with the capability and capacity to cause great harm to their intended targets.”

The Biden administration has said it will determine how to treat the Taliban based on its conduct. Thus far, administration officials have not indicated if they will designate the organization as a terrorist group or make moves to recognize the Islamic Emirate as the rightful government in Kabul.