LOUDOUN COUNTY, VIRGINIA — A few hundred protestors gathered Tuesday evening outside of a Loudoun County Public Schools board meeting to push back against what they say are far-left Critical Race Theory and transgender policies.

Many of the protestors told the Daily Caller News Foundation that they were inspired to attend the rally by The Daily Wire’s Matt Walsh, who flew in from Tennessee to speak to the the school board of Loudoun County, a battleground for progressive education policies including LGBT issues, Critical Race Theory, and racial reparations.

The conservative commentator had amused fans and outraged critics by renting a home in Loudoun County after the school board tried to prevent him from speaking, saying that only county residents could participate in public comments.

Walsh’s fans lined up to greet, interview, or chat with him in the parking lot outside the district building where activists and family organizations had set up tents and a stage. The event was guarded by Loudoun County Public Schools Safety and Security, and security guards checked the bags and bodies of anyone who entered the building for the school board meeting with metal detectors. (RELATED: Is The Current School Board Culture War Really That Different From The Past, Or Are We Just Paying More Attention?)

“I’m here as a concerned member of my own county and a proud Virginian,” Walsh said. “And we are speaking out against the indoctrination and psychological abuse of kids that happens in Loudoun County schools and schools across the country.”

Walsh said that the rally is part of a “growing” and “encouraging trend” of parents who wish to take control of their children’s education.

“If I was able to drive a few more people to come out, then that’s great,” he said. “But when you look around and see all the signs, I think people are here because people are starting to wake up to the fact that the future of our country is not really determined on the national political level, which as conservatives, that’s what we’ve been almost singularly focused on for years. The future is determined right under our noses at school boards like this.”

Activist and teacher Lilit Vanetsyan, who urged parents to act during a viral June LCPS board meeting speech, lamented to the DCNF that it took a celebrity like Walsh coming to the event to draw such a large crowd. (RELATED: A Parent-Led Rebellion Against Critical Race Theory Is Storming School Boards Across The Country)

“I think each time we have a rally, a school board meeting of any kind, that the numbers keep growing,” Vanetsyan said. “I am happy to see everybody here. I am happy to see this number, this turnout here, but I do also believe that if it weren’t for a popular person coming here… we wouldn’t see this kind of turnout.”

Vanetsyan was formerly a teacher with Fairfax County Public Schools, but decided to leave her job over concerns that her “medical freedom was going to be taken advantage of.” She is now providing private instruction for families who have pulled their children out of school.

Parents, you have the law on your side when it comes to rejecting CRT.

Watch the @TheRightMelody‘s speech from the Loudon County School Board Rally.

Check out https://t.co/9fECUBrGez for more ways to fight back against the racist ideologies of CRT. pic.twitter.com/MLiidZdbTU

Angry parents and community members used the public comment section of the meeting to express discontent with policies enacted by the school board, including Policy 8040 that LCPS passed in August. Though a few parents and Loudoun County residents thanked the school board for the progressive policies, the vast majority of those speaking expressed outrage.

Under the policy, teachers must call students by their “chosen name and gender pronouns that reflect their gender identity without any substantiating evidence.” The policy also allows transgender students to participate in sports and use bathrooms that correspond to their chosen gender identity.

“You are all child abusers. You prey upon impressionable children and indoctrinate them into your insane ideological cult, which holds many fanatical views,” Walsh said during brief public comments at the board meeting. “By imposing this vile nonsense on students to the point of even of forcing young girls to share locker rooms with boys, you deprive these kids of safety and privacy.”

“You are poison,” he continued. “You are predators. I can see why you tried to stop us from speaking. You know your ideas are indefensible. You silence the opposing side because you have no argument.” (RELATED: How The Left Pushes LGBTQ Activism On Kids) 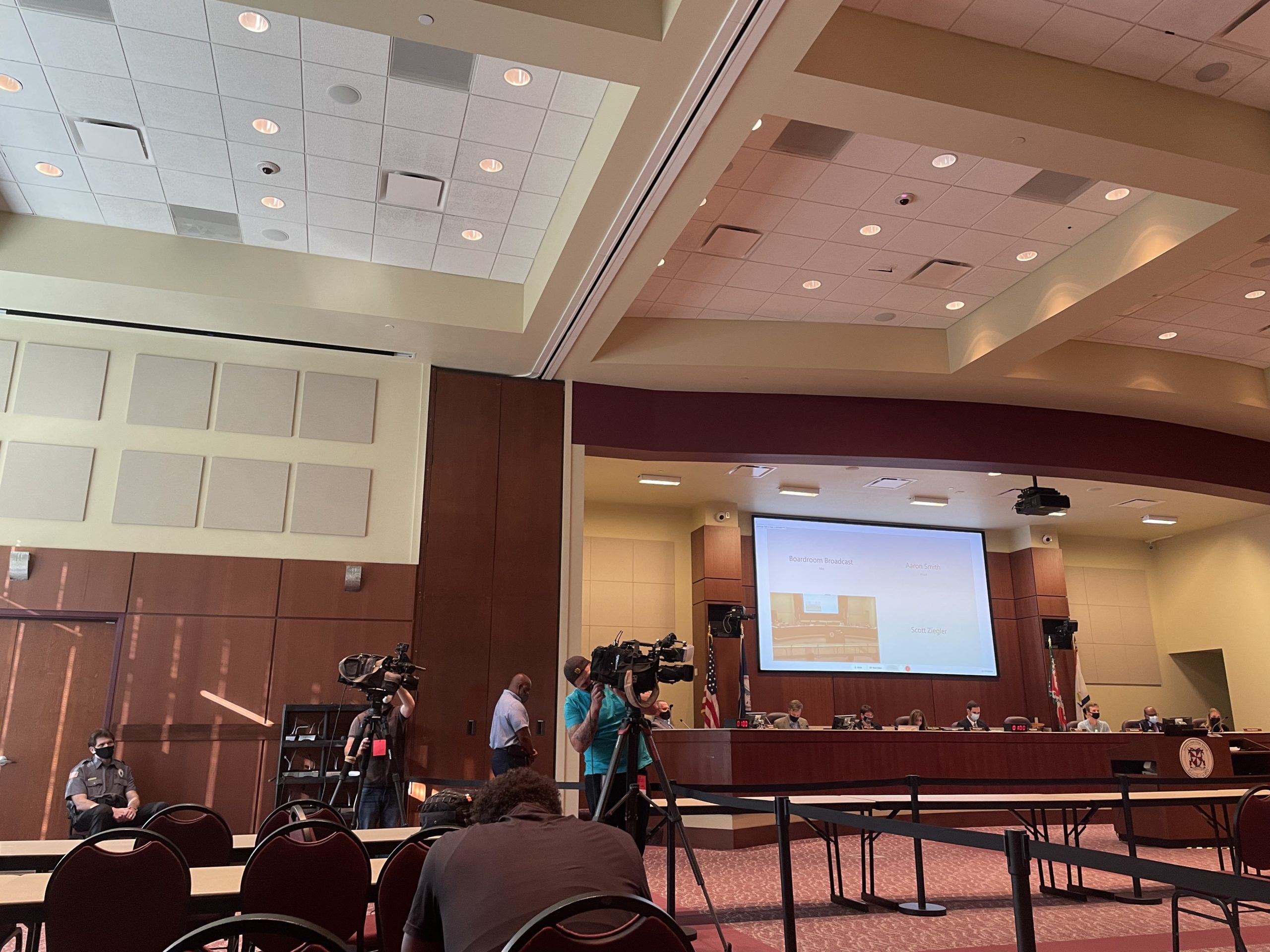 Conservatives are not the only ones outraged by Loudoun County’s progressive policies, Loudoun County resident Kelsey Bean told the school board during her public comments. (RELATED: Meet The Opponents Of Critical Race Theory The Media Does Not Want You To See)

“I have family who is part of the LGBTQ community, I have friends who are pretty left wing, my sister-in-law is pretty for a lot of liberal policies and none of them believe that any of this is the same thing,” Bean told the DCNF after she spoke at the school board meeting. “It’s often misaligned as being a left-wing ideal, but it’s not, it’s just an incredibly radical left-wing ideal, it’s not the general mainstream Democrat that believes this kind of thing.”

“I think that it is trying to be pushed as a generally Democratic ideal, because they think that if you are Democratic then you have to align with that sort of thing,” she added.

Curtis Hazen told the DCNF that it was his first time attending a school board rally. As a daily listener of the Matt Walsh Show, he said, he decided to show up when he heard Walsh was going to attend.

Hazen is a plumber who said he has to work extra jobs to put his kids through private Catholic school. He told the DCNF that shoulders the extra work to keep his kids “from being subjected to this nonsense that is going on here.”

“It’s not something I normally do, but I support the cause,” said Hazen, adding that he wants to be a voice for parents who can’t afford to send their kids elsewhere. “What they are pushing on our children is unacceptable and the fact that my tax dollars go to this really pisses me off.” 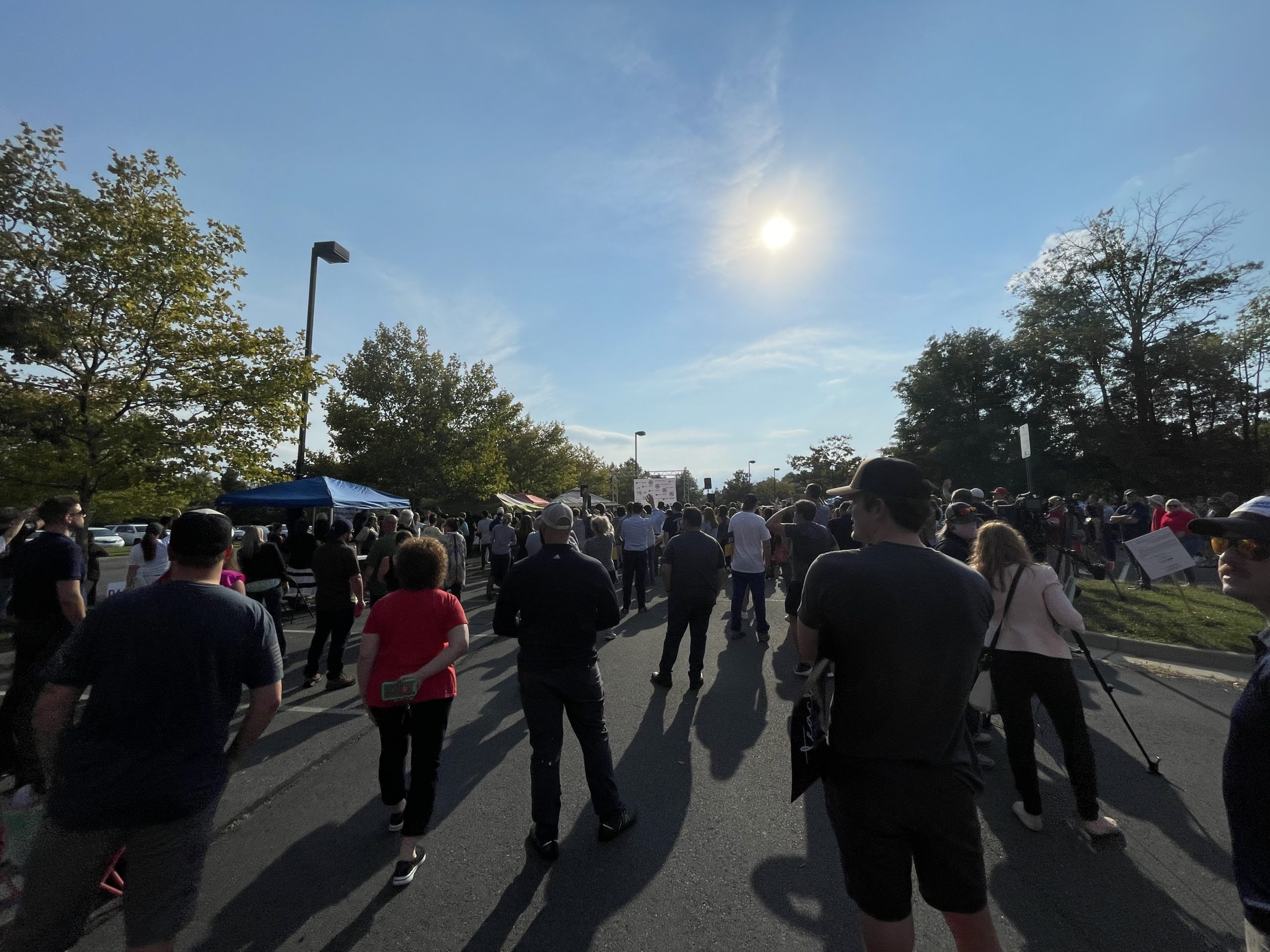 Another parent whose children attended and graduated from LCPS said that he, like Hazen, was attending the rally as a frustrated taxpayer. (RELATED: The New Left’s Institutionalized Racialism Is ‘Everywhere.’ In Medicine, Education, Even In Government Labs. Here’s How It Happened)

“It’s gone so much downhill,” he said. “All they are doing is playing games and it’s all politics. No interest in the kids.”

Loudoun County High School history teacher Monica Gill told the assembled crowd that she has been teaching for 26 years, describing how she loves her job and her students and the “unique physical, mental, or emotional struggles” they each face. 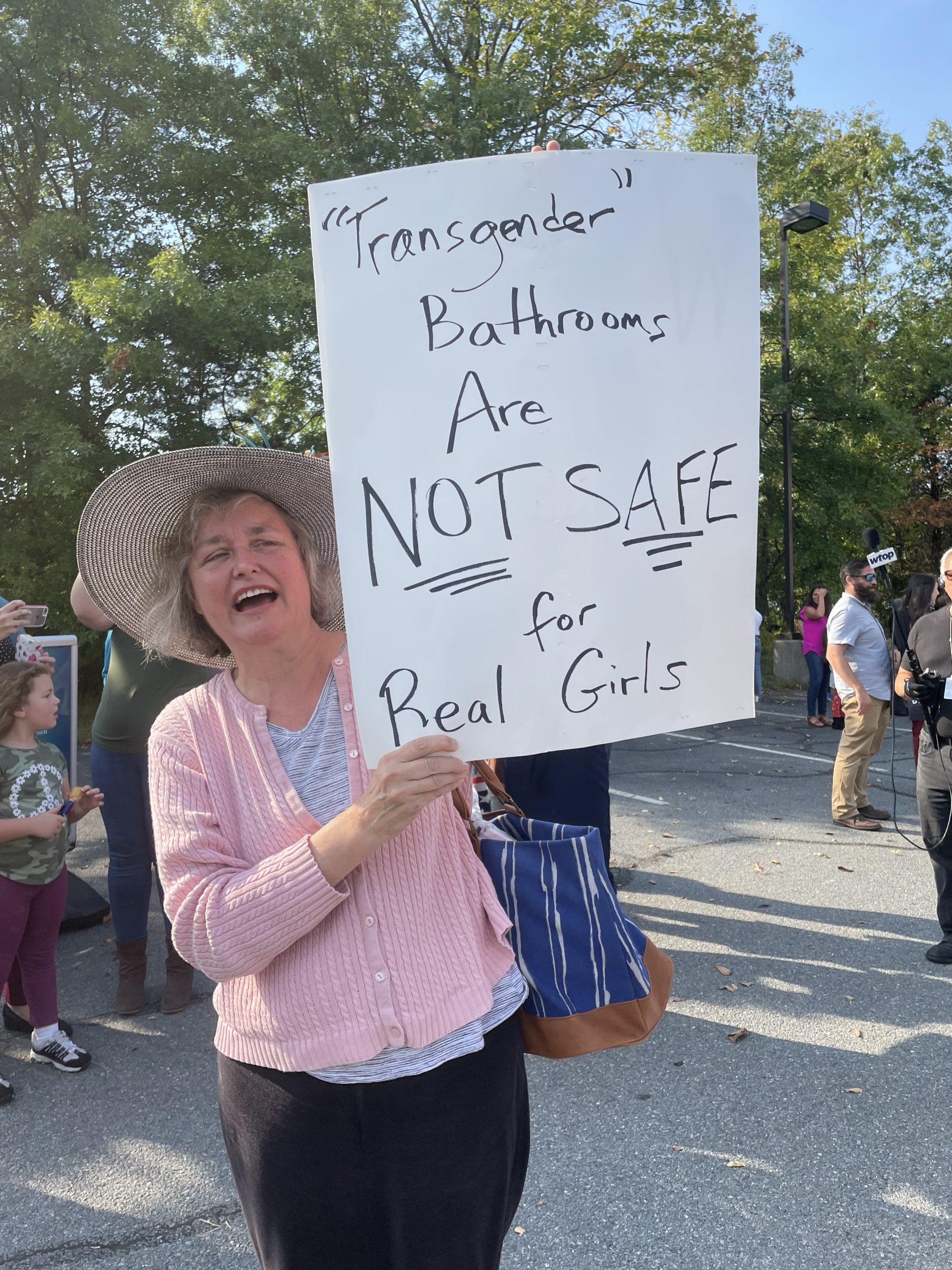 A participant holds up a sign that says “‘Transgender’ bathrooms are NOT SAFE for real girls.” Photo by the Daily Caller News Foundation. 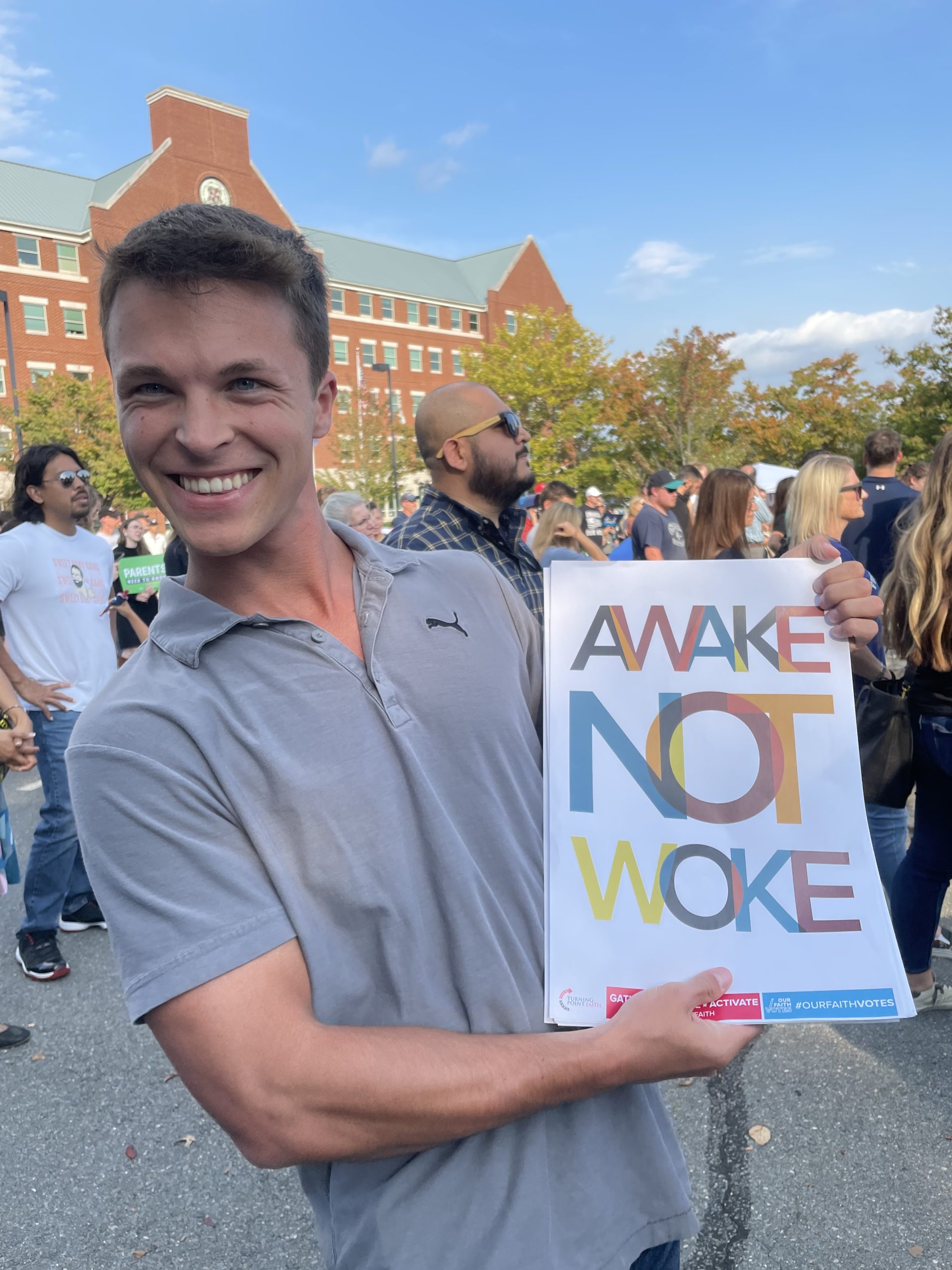 A young man who identified himself as “George” with Turning Point Faith said he was at the rally “to take back the right of parents to govern how their kids are learning their education. Photo by the Daily Caller News Foundation.

“The Loudoun County Public School Board is refusing to listen to its teachers and parents — the very people they were elected to serve — and instead is pushing its own political and cultural agenda on a captive audience of students,” Gill said in a speech.

“There is an earnest debate right now about how to best care for children who struggle with gender dysphoria,” she continued. “The Loudoun County School Board has chosen one side of this debate. They have mandated it — forcing all teachers to be complicit.”

Gill insisted that the school board’s decision is wrong.

“It is not the job of the government to mandate care or mandate individual speech,” she said. “In reality, they are not protecting students — they are pushing a radical gender ideology and allowing our kids to be victims of their social experiment.”