A customer violently assaulted a security guard at a New York City Apple Store after the two had a dispute over masks.

Police said the dispute occurred just after 6:30 PM inside the W. 14th Street store near Chelsea. After the security guard confronted the customer over the store’s COVID-19 mask requirement, the two argued, and that’s when the customer pulled out a sharp object, stabbing the guard multiple times, NBC4 reported. (RELATED: Protesters Descend On Apple Store, Blast Production In China Over Uyghur Genocide)

When police arrived, the suspect had fled the store. 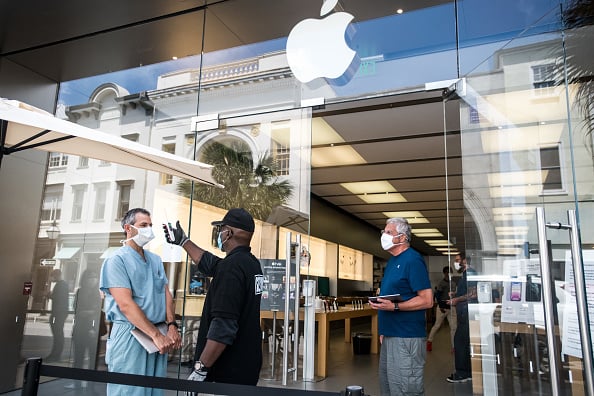 CHARLESTON, SC – MAY 13: A security guard takes the temperature of a customer outside the Apple Store on May 13, 2020 in Charleston, South Carolina. Customers had their temperatures taken and were required to wear masks at the South Carolina store, as locations in Idaho, Alabama, and Alaska reopened as well following forced closures due to the coronavirus. (Photo by Sean Rayford/Getty Images)

Authorities say early information about the suspect is “black, male, 5’6, in his 20’s wearing a black mask, a black shirt and blue jeans,” ABC7 reported.

The security guard was taken to Bellevue Hospital, where he remains in serious but stable condition.

New York City mayor Bill De Blasio implemented various COVID-19 restrictions this past summer, such as showing proof of vaccination for indoor activities such as dining and concerts. De Blasio also ordered all city workers to be vaccinated or submit to weekly testing in September, according to the Associated Press.