Republican members of Congress are expressing frustration with Democrat-led committees that have held a limited number of hearings on the Biden administration. The House Oversight Committee, chaired by Democratic New York Rep. Carolyn Maloney, has held only 35 hearings in 2021, according to an internal GOP document reviewed by the Daily Caller. However, in 2019, the first year of the Trump administration that Democrats controlled committees, the Oversight Committee held 80 hearings, according to the document.

“Under Democrat leadership, the House Oversight and Reform Committee is refusing to hold President Biden accountable and meet its core mission of identifying and preventing government waste, fraud, and abuse. Republicans have demanded dozens of hearings and investigations into important issues facing this country—nearly all requests have fallen on deaf ears. Congress has a constitutional responsibility to conduct oversight. Democrats are flunking out of Congress by failing to do their job. Meanwhile, Republicans will continue to push forward on our Committee’s mission to ensure our government is transparent and accountable to the American people,” Republican Kentucky Rep. James Comer, who sits on both the House Oversight and Education and Labor committees, told the Daily Caller.

While they are sending letters and requests for briefings and documents, Republicans are open about the fact that they will have little power unless they take control of either the House or the Senate in 2022. They are hoping that education, traditionally a local issue, will galvanize suburban swing voters, many of whom supported Democrats over the last few election cycles.

“Democrats and their teachers union donors have resorted to painting concerned parents standing up for their children as terrorists. Voters will hold them accountable in the midterms,” he said.

Congressional Republicans have sent multiple letters requesting information from the Biden administration about Garland’s memo. However, without the threat of a subpoena Sens. Tom Cotton and Josh Hawley were only able to question Deputy Attorney General Lisa Monaco about it during a Senate Judiciary Committee hearing about the Violence Against Women Act. 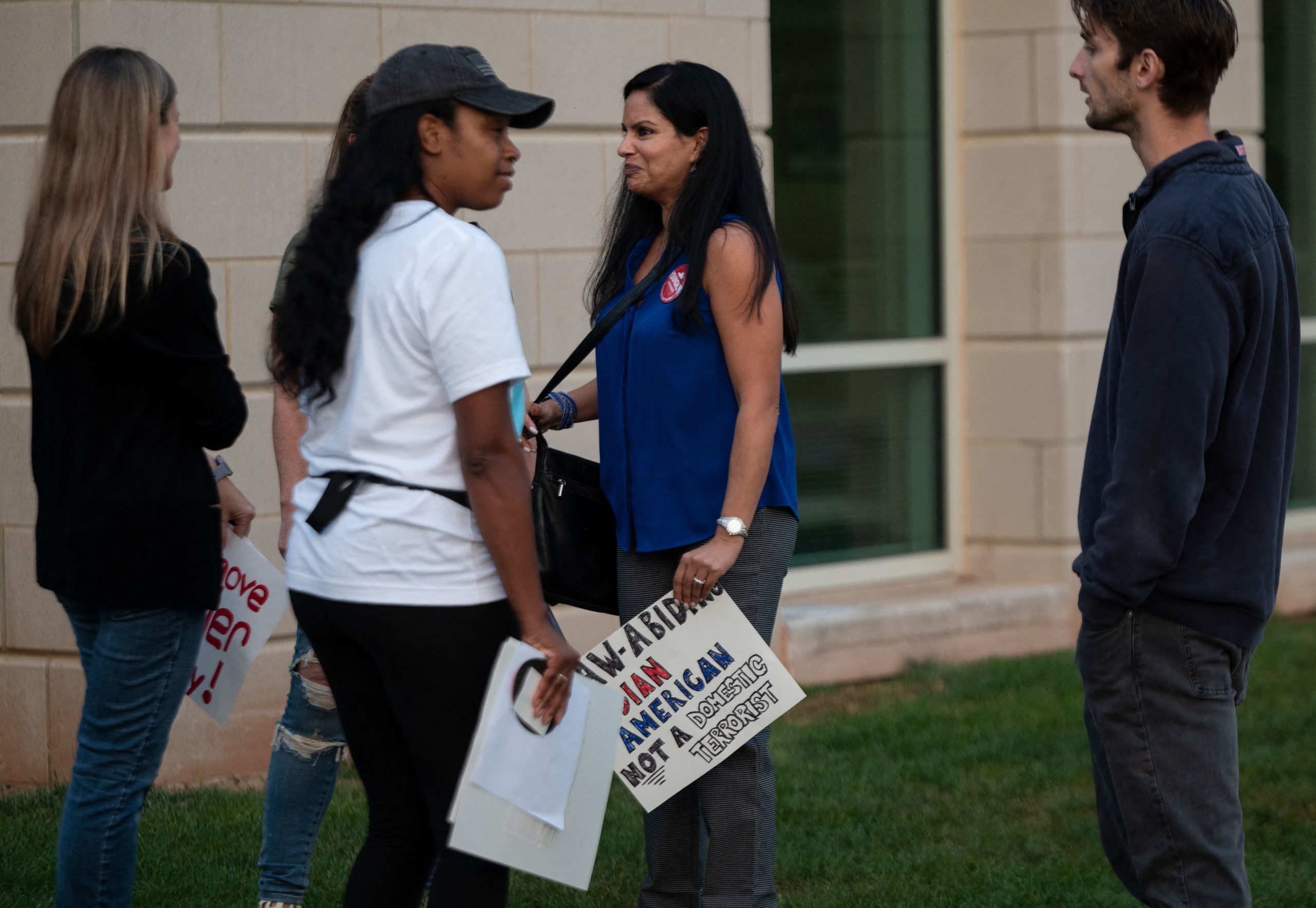 Protesters and activists stand outside a Loudoun County Public Schools (LCPS) board meeting in Ashburn, Virginia on October 12, 2021. Earlier this month US Attorney General Merrick Garland directed federal authorities to hold strategy sessions in the next month with law enforcement to address the increasing threats targeting school board members, teachers and other employees in the nation’s public schools. (Photo by ANDREW CABALLERO-REYNOLDS/AFP via Getty Images)

At the state level, the Virginia gubernatorial race between Republican Glenn Youngkin and Democrat Terry McAuliffe will serve as a bellwether for the 2022 midterms. Education has taken center stage in that race in recent weeks, following McAuliffe’s comments in a debate that he doesn’t “think parents should be telling schools what they should teach.”

However, Virginia’s schools were a key issue for Youngkin before McAuliffe’s remarks, a campaign staffer told the Daily Caller.

The staffer cited fights over the state’s slow reopening in the aftermath of the COVID-19 pandemic, fights over mask mandates and Critical Race Theory, and the elimination of advanced classes in the name of racial equity.

With polls showing that education is one of the three most important issues for Virginia voters, Youngkin is blanketing the airwaves with $3 million in advertising on education-related ads.

“This campaign is about making Virginia the best state, the best place to live and work and raise a family, and there is nothing more critical to Virginia’s future than education. Education has the power to lift people up, to lift people out, to provide opportunities that they can only dream about, to realize the most vivid dreams. It gives every child a chance – every child – and when I’m governor, we will all be about giving every child a chance, to learn, to grow, to succeed, to believe. That’s what Virginia is all about,” Youngkin told the Daily Caller.

Ian Prior, executive director of the Virginia-based Fight for Schools, told the Daily Caller that the COVID-19 pandemic caused many parents who were “traditionally not involved with politics” to become more active, as their children struggled with virtual learning and local schools slow-walked reopening.

Then, the creation of the “Anti-Racist Parents of Loudoun County” Facebook group “turbo-charged” education concerns, Prior said.

A poll commissioned by Fight for Schools and conducted by Public Opinion Strategies found that among voters in Fairfax and Loudoun counties, 86% of Republicans, 57% of independents, and 23% of Democrats oppose the teaching of critical race theory. (RELATED: ‘Lean Into The Culture War’: Republican Study Committee Tells GOP Fighting Critical Race Theory Is A Winning Issue)

“This is truly a grassroots, parents-led movement,” Prior said, comparing parental outrage to a fire that “Democrats have done nothing to throw water on.”

“That fire is never going to burn out of parents,” he added.