New emails reportedly show that a Massachusetts school board association executive was ecstatic about the National School Board Association’s letter calling for the Department of Justice and FBI to intervene with concerned parents.

According to documents obtained by the concerned parent group Parents Defending Education and reviewed by the Daily Caller, the executive director of the Massachusetts Association of School Committees (MASC) sent an email to the CEO and President of the NSBA stating that the committee was “very happy” that the national board “reached out to the FBI.”

“We in MASC are all very happy that NSBA has reached out to the FBI and, based on local coverage, has been identified as a key agent for generating federal support,” said MASC director Glenn Koocher. “We are looking forward to collaborating on a possible regional effort and, certainly, doing something significant here in Massachusetts to generate public awareness of the need for Washington to have our backs on protecting our members and students as well.” 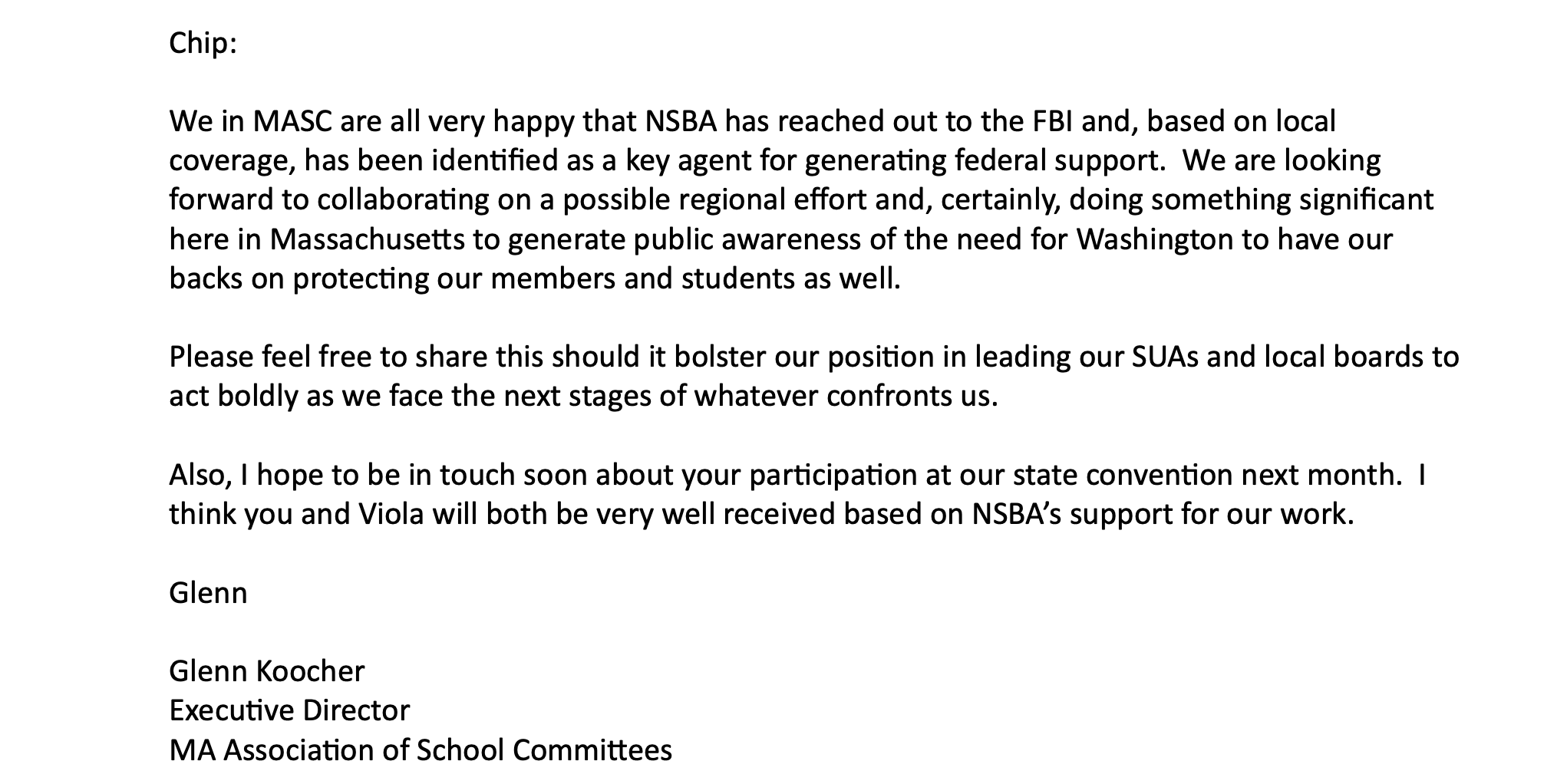 The letter was emailed to NSBA CEO Chip Slaven and President Viola Garcia on Oct. 6. According to other emails obtained by Parents Defending Education, Slaven and Garcia sent the NSBA letter to the White House without the approval of the NSBA’s board. (RELATED: White House Collaborated With School Board Group On Letter Comparing Parents To ‘Domestic Terrorists’)

Koocher told the Daily Caller that the MASC has no plans to “censor” its members.

“Our position on parents is that Massachusetts has the highest standard of free speech protection in the nation and that right is extended to parents and the public at all times,” Koocher said. “We also do not censor our members, including those on both sides of the issues on our listserv.”

Days after the NSBA letter, Attorney General Merrick Garland issued a directive to the Department of Justice to create a task force to determine how “federal enforcement tools can be used.”

The NSBA has since walked back its letter and apologized for how it was released, though Garland — who admitted to the Senate Judiciary Committee that he used the NSBA’s letter as a testimony for his directive — has yet to rescind his memo.

A slew of state school board associations condemned the NSBA’s letter since its publication on Sept. 29. Florida, Kentucky, Louisiana and Alabama are in the process of “reevaluating the benefits” of membership in the NSBA. Other states such as Ohio and New Hampshire have opted to nix their membership altogether.