A senior Ukrainian military adviser floated the idea of handing over the country’s own weapons to its citizens in the event of a Russian invasion, The New York Times reported.

The official told the NYT that the government might have to open its weapons depots to its population so that people could defend their families if the Ukrainian military were to be defeated.

Up to half a million Ukrainians have military experience and there are many “who are prepared with weapons in their hands to fight,” Gen. Oleksandr Pavlyuk told Radio Liberty this month, the NYT reported.

Ukrainian generals told the NYT that Russian forces would overwhelm their nearly 100,000 troops if an invasion were to happen. Gen. Kyrylo O. Budanov, the head of Ukraine’s military intelligence service, told the NYT that “Ukraine needs to be objective at this stage.”

“There are not sufficient military resources for repelling a full-scale attack by Russia if it begins without the support of Western forces,” Budanov said, the NYT reported. (RELATED: ‘Absolutely False’: Psaki Denies Reports That US Advised Ukraine To Cede Land To Russia)

Budanov outlined a nightmare scenario where Russia begins its assault with airstrikes and rockets that target Ukraine’s ammunition depots and troops in the trenches, the NYT reported. Such an attack could lead to the Ukrainian military’s incapacitation. 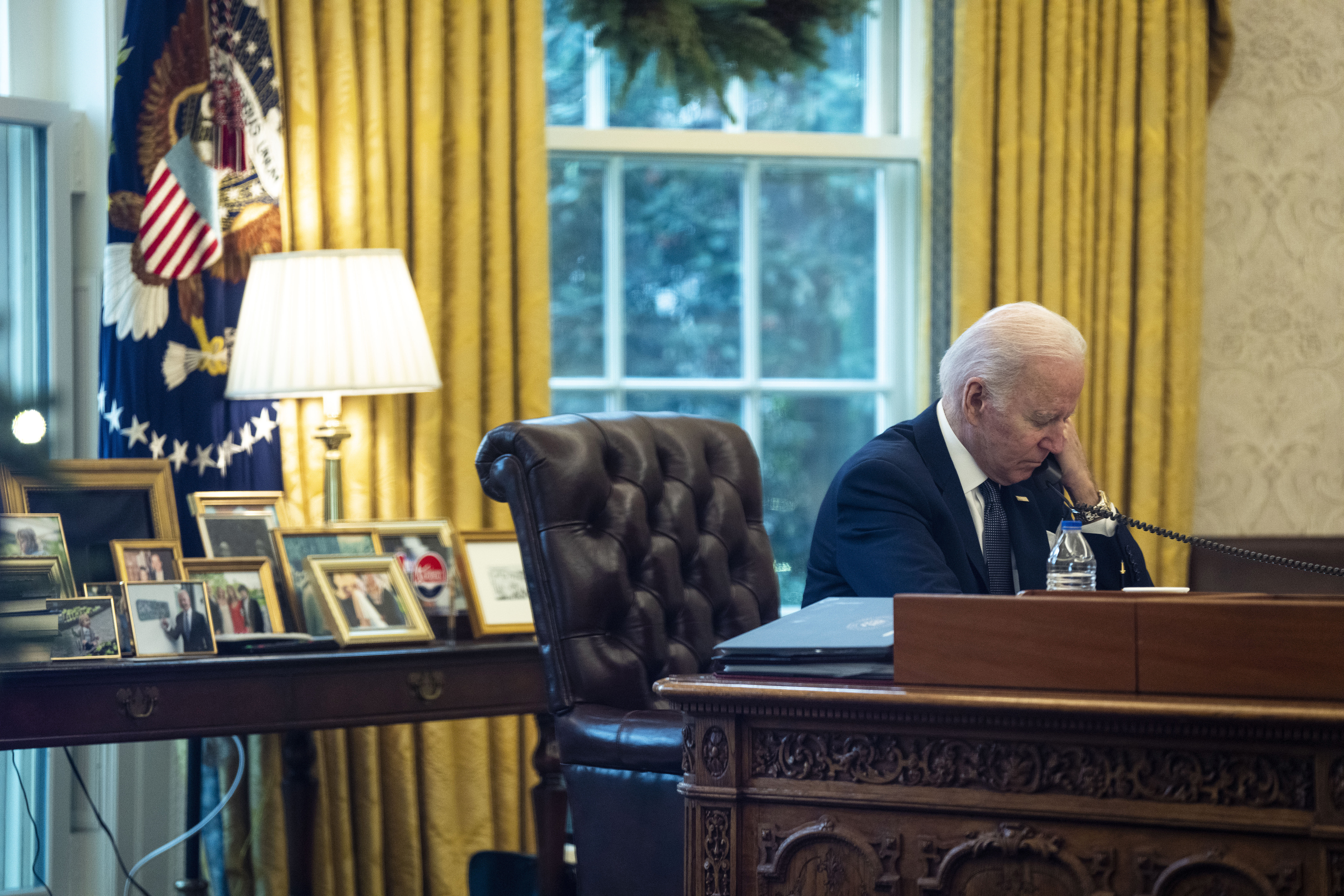 U.S. President Joe Biden talks on the phone with Ukrainian President Volodymyr Zelensky from the Oval Office at the White House on December 09, 2021 in Washington, DC. (Photo by Doug Mills-Pool/Getty Images)

“They will hold up as long as there are bullets,” Budanov said of the frontline commanders who would be forced to fight without leadership supplying the front. “They’ll be able to use what they have in their hands, but believe me without delivery of reserves, there’s not an army in the world that can hold out.”

The Ministry of Defense’s estimated number of enlisted soldiers and officers in Ukraine’s entire military is only slightly larger than the 175,000 Russian troops the U.S. intelligence community estimates are a part of Moscow’s plans for an offensive, the NYT reported.

“If Russia really wants to unleash its conventional capabilities, they could inflict massive damage in a very short period of time,” Robert Lee, a U.S. Marine Corps veteran and Russian military expert, told the NYT. “They can devastate the Ukrainian military in the east really quickly, within the first 30-40 minutes.”

President Joe Biden reportedly told Russian President Vladimir Putin in their call on Tuesday that the U.S. will implement harsher economic penalties than it did when Russia annexed Crimea in 2014 if it invaded Ukraine. He did not specify what the measures entailed, and the lack of commitment from Western allies has created anxiety among Ukrainian officials, the NYT reported.

“They need to decide, either we’re allies as they declare — and in that case allies help one another — or they need to say that this is not exactly the case,” Budanov said. “If the civilized world wants to avoid catastrophe — and this will be a catastrophe for everyone — we need military technical support now, not tomorrow, not the day after tomorrow, not in year. Now.”