About 10 years ago I was invited on a hog-eradication hunt in Florida. The hogs had multiplied on an orange farm and were devastating the orchard, but because the vegetation was so thick—and because smart hogs quickly go nocturnal in the face of persecution—helicopter hunting was futile. Trapping worked somewhat until the pigs learned the gig, just like they learned to evade hunting dogs by taking to the swamps. So our tool of choice was a then-new-to-civilians military-grade thermal weapon scope. Man, was it effective! At 300 yards in darkness I could clearly see to shoot the heart, lung and brain areas of any hog that wasn’t too hidden by the foliage. We really piled them up for the farmer. The problem? Back then that scope (we borrowed it) cost more than $200,000!

Fast forward to today and wild hogs are even more of a problem. But affording a top-notch thermal optic is less of one. ATN Corp. is a California-based technology company that’s been operating since 1995. The firm is on the cutting edge of consumer-based thermal technology, and its ThOR 4 Series 640×480 2.5x-25x-50mm “Smart HD Thermal Rifescope” is the best it offers. Let me tell you, it’s awesome.

In essence, the ThOR 4 is a 14.5-inch-long scope with a 50mm objective and a 25x digital zoom. Its imaging system contains more pixels (640×480) for greater resolution compared to its other models (320×240 models) especially as the magnification is cranked up. But the ThOR’s overall look on your rifle is about where its similarities with a conventional riflescope end. While its objective bell houses lenses to transmit data to the Gen 4 sensor/dual-core processor behind it, the “ocular lens” is actually a small OLED viewing screen.

Here’s an elementary explanation of how thermal tech works: Basically, every living thing and most inanimate objects—if they’ve recently been heated by the sun—emit electromagnetic radiation in the form of photons. Some of these photons travel in waves on the infrared portion of the electromagnetic spectrum. A thermal scope’s sensors analyze these waves, assign a strength value to them relative to their energy output, and convert each to various colors of light visible to the human eye. In this way the differences between objects and even various portions of each object are made to contrast against each other so they become visible. Basically, the scope allows the shooter to see heat waves rather than light waves, something most of us thought was otherworldly technology, or Hollywood technology only after viewing the movie “Predator” in the late ’80s.

But the ThOR does something else: Rather than merely allowing someone to see objects in total darkness, it superimposes a digital, adjustable reticle over the viewing screen. This allows shooters to zero the optic to any firearm and experience accuracy on par with any quality riflescope. And because all functions of the scope are digital, its possibilities are limited only by ATN’s computer engineering and software development—and what most American shooters will accept. 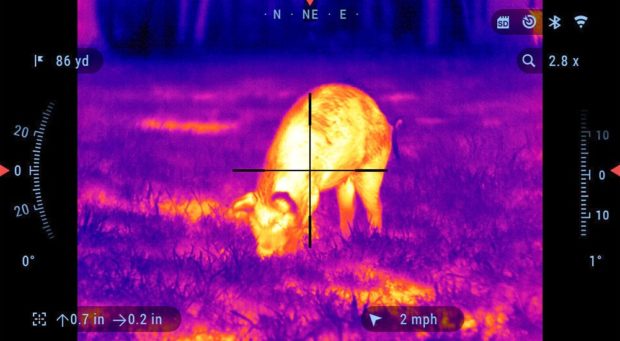 The ThOR 4’s sensors analyze and value photons on the infrared portion of the electromagnetic spectrum so users see heat waves rather than light waves.

For example, because the optic contains a computer, it wasn’t a leap to install an on-board ballistics program that compensates for your bullet’s drop. With a few clicks of a button, the user can choose various reticle styles and set the MOA or MIL dot subtension values right there. Because the scope features Wi-Fi and Bluetooth, it can be connected to a capable laser rangefinder or your smartphone to remotely control the scope and stream live video. (This feature allows your buddy to see what’s happening when otherwise he’d be sitting there completely in the dark!) It’s got an onboard compass and inclinometer, and it will even record video of the shot. Basically, the ThOR is a riflescope-shaped computer sitting atop your gun. As such, it’s got so many capabilities and features that they’re impossible to list here. Just know that anyone who buys this scope and wishes to take advantage of all its features should at least be somewhat electronics-savvy and willing to study the owner’s manual.

To be clear, ATN has done a good job of dumbing down its fantastic technology so average hunters and shooters can use its basic function as a thermal scope. Indeed, ATN was so concerned about this that it placed a control wheel on the scope rather than a button, and it placed handy stickers directly on the scope to guide first-time users through seven steps to use, starting with 1: Turn On, and ending with 7: Charge [Batteries] through USB port. The scope’s five central buttons are large, and with practice, can be used without looking at them.

The trickiest part is the zeroing process—not because it’s difficult but because it’s different from a conventional riflescope. But ATN’s engineers addressed this in an ingenious fashion. Once the scope is bore sighted, one shot should be fired. Then, after entering the digital zeroing menu, the shooter centers the reticle exactly where it was last aimed while simultaneously using the up, down, left and right buttons to move another reticle to the exact place where the bullet impacted. Once the changes are saved, the two reticles merge. If done precisely, the scope is now zeroed.

It pays to read the manual. (I’m around 40 years old and fairly smartphone savvy, but I don’t love electronics or computers. I figured out how to use the old-school menu and toggle buttons, but I didn’t enjoy the experience. When I learned to connect my smartphone to the ThOR via Wi-Fi and control it via the app, it made a huge difference in user friendliness. I suggest you do the same.)

After I zeroed the scope and became familiar with it, using it on hogs and other nighttime vermin was purely awesome. It also proved effective for scouting deer at night without spooking them. It even picks up antlers. Provided my line of sight was mostly unencumbered, I could see to shoot hogs at well beyond 500 yards using the digital zoom and the ballistic reticle. Prior to use I worried about battery life, but I was pleasantly surprised. One charge of its lithium battery lasted more than 15 hours (multiple hunts). Finally, I used the scope enough and banged it around my ATV enough to say with confidence that it’s tough enough to hunt.

As for negatives: First, as on any night-vision or thermal optic, anytime you look through the viewing screen at night, it ruins the night vision in one eye momentarily, and this takes some getting used to. Second, the ThOR 4 50mm is big and heavy. It weighs more than 2 pounds. Third, although ATN has improved the scope’s digital controls over prior thermals, they could still be more user-friendly to hunters who don’t talk in X and Y axis, but rather in clicks and simple up, down, left and right point-of-impact directions. Lastly—and you knew this was coming—while thermal technology has dropped big time in price over the last decade, they certainly aren’t giving it away. The ThOR 4 50mm as tested retails for around $4,200, although lesser models that don’t have all the features or resolution can be purchased for less than $2,000.

But there isn’t a better tool available for eradicating wild pigs and vermin. The ThOR 4 lends the shooter so much of an advantage that it’s not fair—but nobody said eliminating feral hogs was supposed to be fair. It also has so many other uses—game scouting, home security, nighttime surveillance—I feel great knowing not only can I see what’s lurking in the dark, I can also nail it with a bullet.